On Saturday night, multiple individuals reported being shot with metal pellets and paintball guns in the same vicinity.

By Pete Grieve    and Jamie Ehrlich 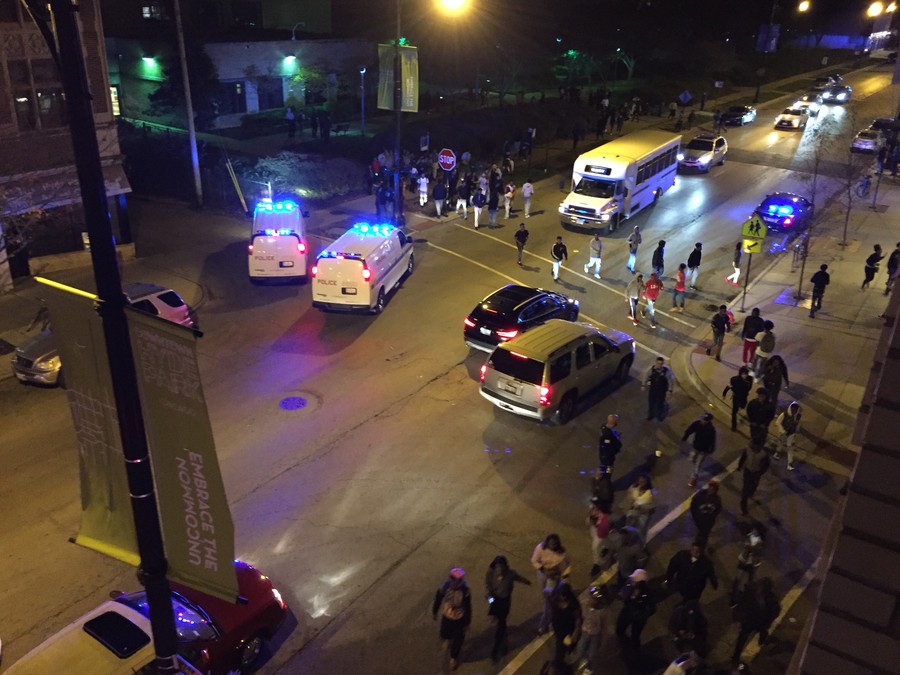 The scene at 53rd Street and Kenwood Avenue around 10 p.m. on Saturday.

The principal of Kenwood Academy High School on East Hyde Park Boulevard and South Blackstone Avenue sent an e-mail to parents and guardians today warning them of a planned “Halloween Purge” expected to occur in the Hyde Park neighborhood at 4 p.m., specifically on East 53rd Street.

Both Kenwood Academy and The Maroon obtained social media posts alluding to possible activity in the Hyde Park neighborhood this evening. The principal said in the e-mail that “Halloween Purge” refers to gatherings of teenagers engaging in “inappropriate behaviors,” such as throwing eggs, disrupting the neighborhood, shooting paintball guns, and breaking windows.

The students coming to Hyde Park are expected to come from across Chicago and are not exclusively from the Hyde Park neighborhood, he said in the e-mail.

A University of Chicago Police Department (UCPD) incident report just before 8 p.m. Saturday night said that an arrest was made after a brief police chase when an individual was “struck on the left arm and hip by a missile fired from a paintball gun” at 1380 East 53rd Street.

A UCPD incident report on Sunday read, “Individual walking on the sidewalk off-campus was struck on the back of the head with a paintball / Victim did not see who fired the ball / Declined medical attention.” The incident occurred at 12:25 a.m at 5503 South Woodlawn Avenue. There was an additional report earlier in the evening of a fight on East 53rd Street, but the victim declined further medical attention.

The e-mail said that UCPD and Chicago Police have been notified.

I am writing to inform you that the school received a message via social media that a "Halloween Purge" will occur in the Hyde Park neighborhood, at 53th Street. The scheduled time is 4:00 p.m. However, it could be later in the evening.

A "Halloween Purge" refers to the gathering of teenagers to engage in inappropriate behaviors, e.g., throwing eggs, disrupting the neighborhood, paint balls, breaking windows. On Saturday night, the school was informed of a similar event that occurred in the neighborhood.

These were young people from across the city of Chicago, from both public and private schools. It was not organized by Kenwood Academy High School students. They selected Hyde Park as the neighborhood. The school has contacted the Chicago Police Department and University of Chicago Police.

It appears to be organized by younger students. That said, please contact your student and inform him or her to go directly home after school. Also, please inform your student not to visit 53rd street at dismissal. Lastly, please do not allow your student to "hang out" tonight in the Hyde Park neighborhood.

Thank you in advance for your assistance.

This article misstated the address of Kenwood Academy. It is on East Hyde Park Boulevard and South Blackstone Avenue.

The University should have sent students a warning before the Halloween “purge.”