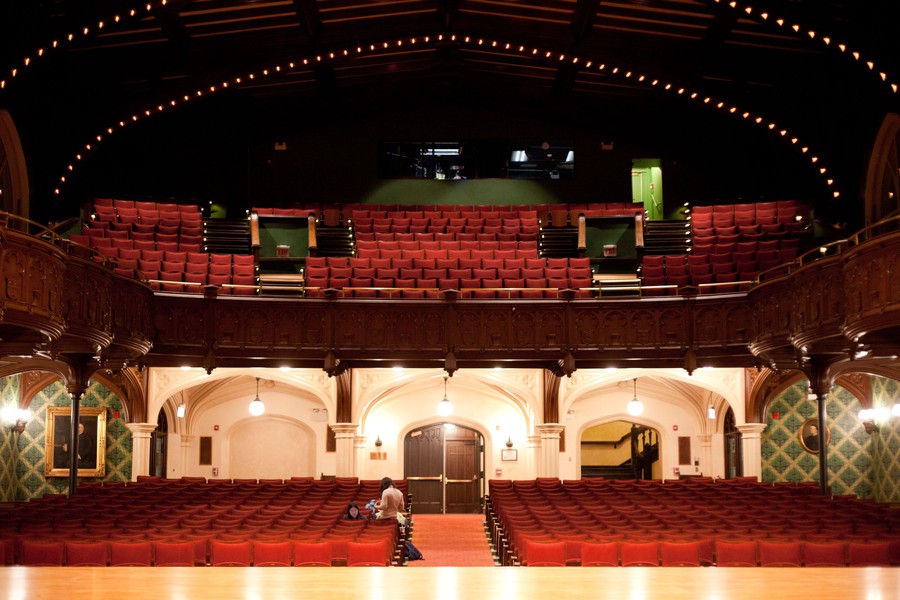 By May Huang   and Zeke Gillman

On Saturday night, the University Symphony Orchestra (USO) performed its annual Halloween concert, this year titled “Magic, Curses, and Spells,” in Mandel Hall. With conductor Barbara Schubert at the helm, the symphony tried to usher in the Halloween spirit with a solid performance of pieces ranging from Tchaikovsky’s Sleeping Beauty to Dukas’s Sorcerer’s Apprentice along with tracks from John Williams’s Harry Potter score.

As is traditional of the Halloween concert, the student orchestra and audience donned their best costumes to create a festive atmosphere. A number of players were fittingly dressed as Hogwarts students; there was at least one Pokémon, six Waldos, and more costumed musicians. The doors of Mandel Hall were even decorated to mark the occasion with brick wallpaper meant to resemble “Platform 9 ¾” from the Harry Potter movies.

When the symphony first started playing the entrance music, the conductor was nowhere to be found; an usher holding up a large paper cutout of Hedwig ran across the front of the stage to music from the Harry Potter soundtrack. Then, as the entrance music eased into the Sleeping Beauty theme, maestra Schubert—dressed as Princess Aurora in a floor-length gown and a long blonde wig—came rolling down the aisle in a leaf-adorned cart. Holding a stuffed owl in one hand and conducting with the other, she stepped onto stage as the piece was ending...commencing the night’s performance.

Schubert began the concert with a few poetic verses to introduce the night’s music. As she finished her rhymes, she segued into the first piece, the Act I finale of Tchaikovsky’s Sleeping Beauty: The Curse. The music played throughout the night, however, this was not the only notable component of the performance. Franck’s The Accursed Huntsman and Dukas’s The Sorcerer’s Apprentice were supplemented with choreography performed by the teenage students of the Hyde Park School of Dance, who danced in the aisles of the hall with props ranging from masks to brooms. Lighting effects also accompanied every piece to dramatic effect.

The performance of Tchaikovsky’s The Curse was impressive, while the John Williams’ pieces from Harry Potter and the Sorcerer’s Stone were somewhat lacking. Although there were also a few moments during the performance when the strings could be heard out of tune, such mistakes were easy to overlook.

And yet, while the music was satisfactory, it was hard not to see the effect of the show’s primary demographic. The promotion of the show to a much younger audience may have been in good spirits, but it came at the cost of an appreciation for the musician’s playing. There were moments when, at least for some, the music was overwhelmed by shrieking children insistent on leaving.

With the final note to Williams’s Harry’s Wondrous World, Schubert took a bow to a thunderous applause. And though there were some whose applause was genuine, there were still others who might have regretted attending the earlier of the USO’s two Halloween concerts that evening. Nonetheless, it was certainly a memorable first performance from the USO.

Uncommon Interview: Barbara Schubert Reflects on 40 Years With the USO