WHPK wants the University to give DJs 24-hour access the station. 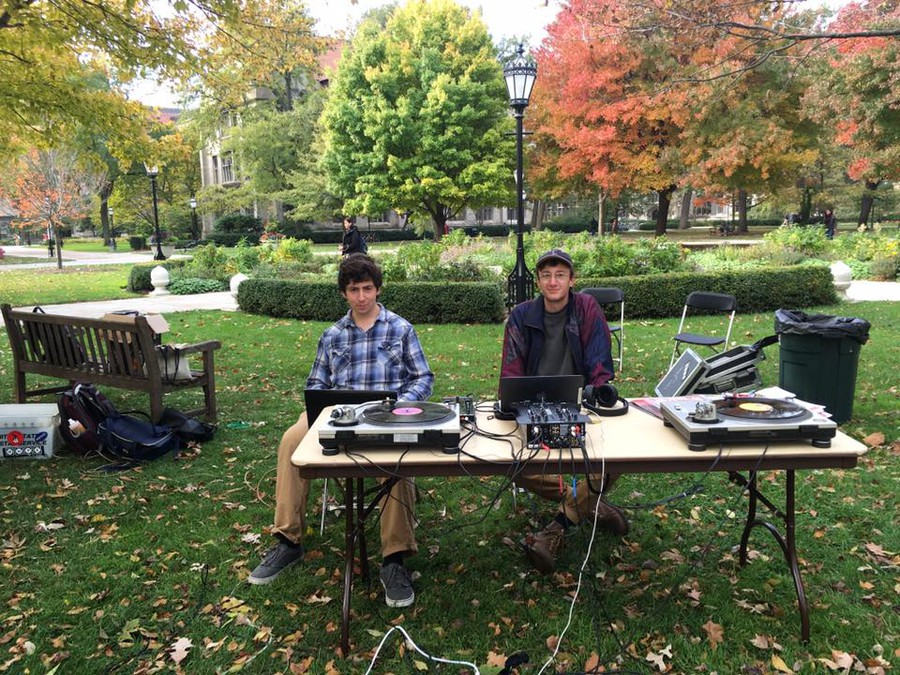 WHPK DJs spun tracks on the quad on Friday in protest of programming changes by the University.

WHPK held a “DJ-In” on the quad last Friday to protest recent changes to station policy. The event, which lasted from 10 a.m. until late evening, had station DJs spinning while volunteers from the station distributed flyers and invited passing students to participate in the calling campaign that began last week.

WHPK has been operating with reduced hours since it reopened this September. The station had been off-air for more than two months as homes of DJs were inspected following a spotting of bed-bugs at the station. Before that, the station broadcasted 24 hours a day from its Reynold’s Club studio.

“As part of ongoing safety and security assessments of the campus and its facilities, it was determined that making the studio, which is located in a University facility, accessible after hours devoid of adequate building staffing, security, and supervision is no longer possible,” News Office spokeswoman Marielle Sainvilus wrote in an October 20 statement.

WHPK administration has made many changes in order to accommodate its programming within the shorter time window. DJs in the Rock genre have had their shows cut from two hours to just one. WHPK leadership is struggling to find time slots for new applicants. Traditionally, beginner DJs would have shows in the late night and early morning, but these options are no longer possible. “It’s like able to be operational, but then, how do you expand? How do you grow?” DJ Andrew Fialkowski said at the “DJ-In” Friday.

Many within the WHPK community have been working to negotiate a new policy with the administration to reinstate 24-hour access to Reynold’s Club. Earlier this month, the station began a calling campaign where DJs and community supporters called Sarah Cunningham of the Center for Leadership and Involvement (CLI) and Michael Hayes of the Center for Student Life (CSL). Volunteers signed up for time slots every 15 minutes. According to multiple WHPK DJs, Cunningham did not answer any calls from the campaign.

“This response, or rather lack of response, is one of the problems we would like to call attention to with our campaign,” WHPK DJ Lexi Drexelius wrote in an e-mail. “The University professes a commitment to open discourse and free speech and yet by ignoring these extremely thoughtful calls and e-mails they contradict themselves.”

According to the News Office, WHPK administration has been working alongside the University to establish remote broadcasting.

“WHPK is an important part of our campus community and due to their unique programming hours, we are aggressively working with the WHPK station manager to help find a solution for continued 24-hour programming, including remote broadcasting capabilities,” Sainvilus said. “We hope to have the technology installed and operational as soon as possible.”

However, many DJs expressed hesitation about remote broadcasting options. “It denies the use of our extensive record and CD library, technology, and completely misses the point of getting real experience in an actual studio where one learns the nuances of working with radio,” Drexelius said.

Although WHPK’s future remains unclear, the DJs are committed to continue protesting the changes. As DJ Ethan Weinstein wrote, “It is my hope that the University hears our voices and gets off their high horse some time soon so we can stop pestering them and find out what it will take to reinstate our 24-hour access, but in the meantime we won't stop calling and emailing.”

[Update: Campaign to Continue Next Week] WHPK Called the CLI Every 15 Minutes This Week Demanding 24/7 Broadcasting

After an incident with bed bugs, the University said that WHPK can only use the station during Reynolds building hours.