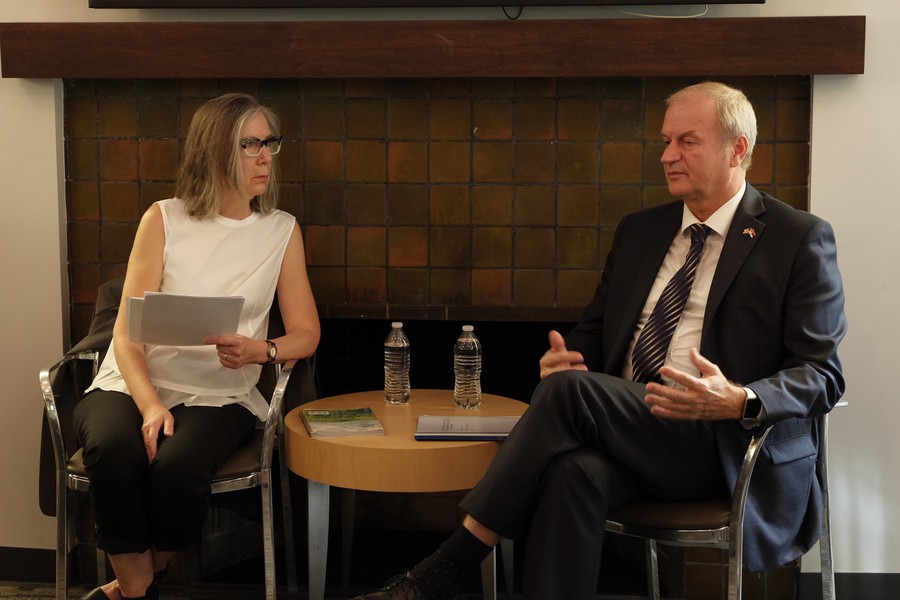 His Excellency Djerdi Matkovic, Ambassador of Serbia visits the Institute of Politics on Oct. 3 to explore U.S.-Serbian relations and Serbia's integration into the EU.

Djerdj Matkovic visited the Institute of Politics (IOP) as part of its “Diplomatic Encounters” series, which the IOP hosts with the help of the International Institute and various area studies programs at the University. Nada Petković-Djordjević, a lecturer in South Slavic Languages at the University, moderated the discussion.

According to Matkovic, the relationship between Serbia and the United States has improved substantially since the 1990s. The ambassador emphasized the economic aspect of the relationship. Matkovic hopes more American companies will move production facilities to Serbia in order to take advantage of its free trade agreements with much of the old Soviet bloc.

“In one sentence: I am very satisfied with the relationship. It makes my job easier,” Matkovic said.

Though crises across Europe have sparked skepticism about European integration elsewhere on the continent, Serbia’s government has remained committed to its goal of joining the European Union (EU), Matkovic said. However, Matkovic said that the addition of barriers imposed on Serbia’s accession dampened enthusiasm to join the EU and that the process was sometimes “a little frustrating.”

“We would be a very constructive and cooperative member of the EU. We meet all the EU standards in Serbia, and we would be a member which would contribute to the richness of the European Union,” Matkovic said. Matkovic expressed appreciation for American support of Serbian entrance into the EU.

Matkovic said the Serbian government was not interested in negotiating Kosovo’s final status, but was willing to take steps to improve the conditions of ordinary Kosovars.

In a Q&A session, following the discussion, an audience member asked Matkovic about Serbia’s relationship with Russia. Matkovic said that Serbia had alienated Russia, a traditional ally, by speaking in support of the territorial integrity of Ukraine, but was unable to join the Western sanctions regime against Russia, one of largest trading partners.

Matkovic hopes Russia and the United States will be able to resolve the tensions between them.

“Yes, Putin has a huge ego—he wants to be a world leader, he wants Russia to become again a superpower,” Matkovic said. “Instead of going against them and trying to create more negative effects on the Russian side, I think the U.S. should engage more in dialogue and in trying to find solutions.”