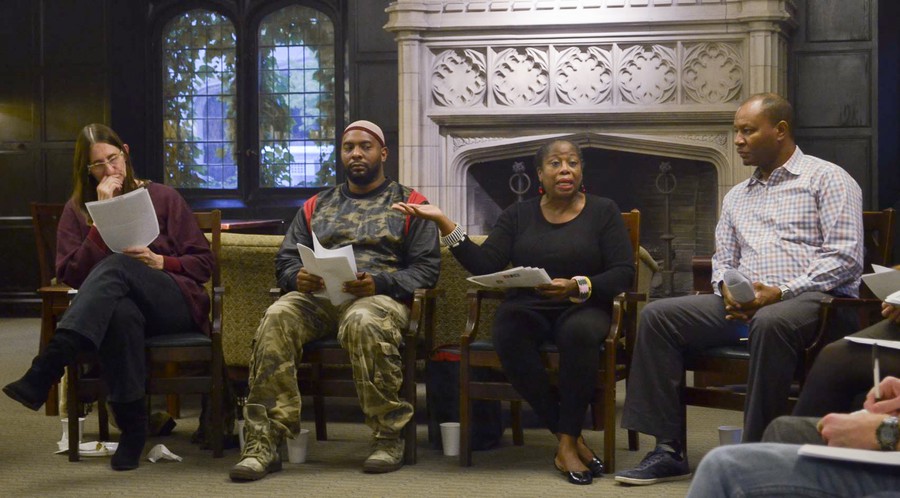 On Oct. 3 Rev. Julie Less, Haroon Garel, Naomi Davis, and Shannon Bennett (from left to right) engage in a panel discussion on the community benefits of the Obama Presidential Library.

A coalition of South Side community groups and students convened in Reynolds Club this Monday to promote a community benefits agreement (CBA) they hope to push the City of Chicago and the Obama Foundation to sign.

With the CBA, community leaders are hoping to foster closer community ties with the Obama Presidential Center set to be built in Jackson Park. The agreement would legally bind the presidential center to provide surrounding communities with specific benefits.

While the presidential center has been touted by the University, City, and Obama Foundation as a major cultural and economic boon for the South Side, Monday’s forum revealed that questions remain among community members as to the extent of the center’s community reach.

“[The center] is not just a building and not just a library,” Southside Together Organizing for Power (STOP) member Haroon Galel said. “This is something that can transform the whole neighborhood.”

The coalition behind the proposed CBA hopes to secure commitments to jobs for residents, community school partnerships, contracts with locally-owned businesses, and public transport and parkland improvements.

“The University, the Obama Foundation, and the City of Chicago are now barreling ahead with the expressed philosophy that no CBA is necessary,” Blacks in Green (BIG) founder Naomi Davis said. “No one can manage a project that big without alignment of parties, interests, targets, timelines, and finances.”

As the first presidential center to be built in a largely low-income, urban area, pressure for the center to provide cultural and economic benefits to surrounding communities is high.

“We believe the Obama Presidential Center can make or break the South Side, and we’re committed to [help] make it,” Davis said.

Shannon Bennett, deputy director of Kenwood Oakland Community Organization (KOCO), mentioned his organization’s past experience in securing community agreements. In the city’s bid for the 2016 Olympics, the organization secured a memorandum of understanding with the city that laid out development principles.

For the Prayer and Action Collective—a faith-based group of University students working with community coalitions—the fight for a Level I Trauma Center at the University of Chicago Medical Center gives the group a foundation for its current organizing efforts. Now, by partnering with various coalitions such as BIG, KOCO, and STOP, the Collective has focused its efforts toward guaranteeing community benefits from the presidential center. Town hall meetings this summer jump-started the discussion.

“This development certainly holds incredible potential to strengthen communities around the library, but we know that economic and social benefits will not materialize unless the voices and needs of the residents are not only heard but adhered to,” said fourth-year Collective member Rob Hayes.

Little of Monday evening’s discussion focused on the specifics of the proposed CBA. Additionally, it was not clear how the CBA would affect Washington Park, which lost out on the presidential center to Jackson Park and the neighboring Woodlawn neighborhood.

At an August news conference announcing the selection of Jackson Park, Mayor Rahm Emanuel and Obama Foundation Chairman Martin Nesbitt stated that efforts will be made to spread the presidential center’s resources to not only neighboring Woodlawn, but also to Washington Park. The specifics regarding how they intend to do so remain unclear.

Washington Park’s Arts Block, a cluster of renovated buildings on East Garfield Avenue, is an ongoing initiative by the University to develop gallery, performance, and retail space on the block around the Garfield Green Line station. However, hundreds of vacant lots remain in the neighborhood, lining the elevated Green Line tracks and dotting residential districts.

Instead, Monday’s meeting—primarily attended by students—was heavy on the University’s history of strained community relations. The panel members were not shy in voicing a long list of grievances against the University, which they painted as a self-interested institution of clandestine intentions. “[The University] could use its power and purse to help neighbors to acquire that land,” Davis said, referring to the large swathes of land in Washington Park the University has acquired in recent years. “It doesn’t have to own everything itself.”

In attendance was State Representative Mary Flowers, who joined the panel members in urging students to advocate for change. Flowers concluded, “The only way we are going to solve these problems will be discussion.” For this coalition, Monday evening was a start.