A candidate's chalkings were edited by a competitor's campaign to suggest he supported Trump. 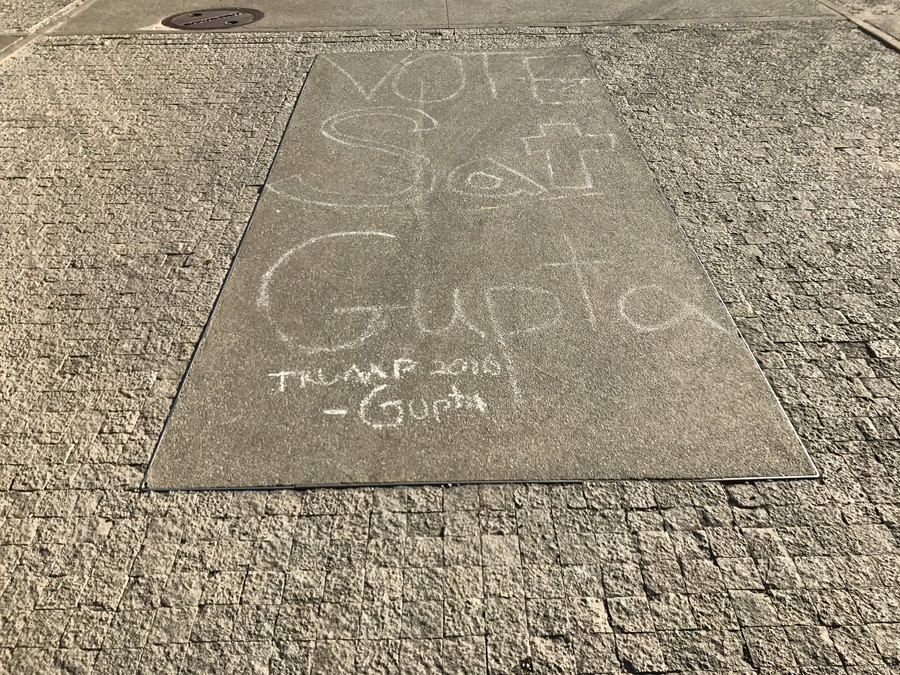 "Trump 2016–Gupta" was seen under a candidate's chalk ad near Hull gate.

Chalkings that defaced advertisements for a class of 2020 College Council candidate and associated him with Donald Trump’s presidential campaign drew the first complaint of the year to the Student Government (SG) body that enforces election rules.

SG’s Election and Rules Committee (E&R) warned first-year Grant Morrison after chalk advertisements for one of his opponents, Sat Gupta, were chalked over and pro-Morrison ads were written in. In a couple cases, ads were edited to suggest that Gupta supported Trump.

Underneath one pro-Gupta ad that read “Vote Sat Gupta,” someone wrote “Trump 2016–Gupta.” In another case, “Gupta 4 Trump,” was written.

Morrison told E&R that a friend of his had defaced Gupta’s advertisements. He declined to identify his friend when asked by The Maroon. Under SG’s Election Code, candidates are culpable for the actions of their campaign, which can include any person working on their behalf. Article 3, Section 2 of the Election Code adopts the University’s posting policy, which prohibits new postings that cover old ones.

“My only comment is that my campaign expresses remorse,” Morrison wrote to The Maroon. After the E&R hearing, Morrison told The Maroon that the chalkings would have only been visible briefly before recent rainstorms washed them away.

E&R can deduct 5 or 10 percent from a candidate’s vote total or disqualify a candidate entirely, depending on the weight of the offense. Instead, after a short closed meeting, E&R voted unanimously to “issue a decorum warning in the name of sportsmanship and a clean election.”

“In ordinary circumstances, violations of the posting rules could result in a minor infraction [and a 5 percent deduction], but given the circumstances surrounding the action, and the candidate’s forthrightness with the Committee, we issue a warning,” the committee's ruling read. The warning requires Morrison to clean any remaining chalkings that associate Gupta with Trump by 5 p.m. on Friday.

“I'm glad that E&R is encouraging a sportsmanlike and clean election,” Gupta wrote in an e-mail to The Maroon. Gupta did not file the complaint. Because the complainant did not appear at the E&R meeting to make their case, they remain anonymous.

The original headline for this article said Gupta's ads were "defamed." It should have said "defaced."

A complainant estimated that Michael Sitver spent $1,820.70 on a Snapchat geofilter. Sitver shared receipts with E&R showing that he spent only $56.98.