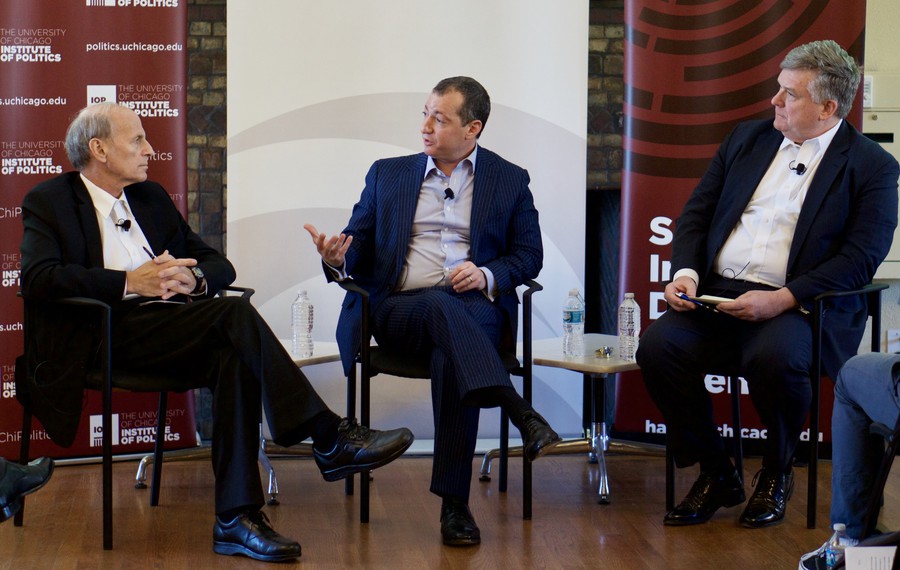 The United States has aimed to integrate China into the international system and pursue a constructive bilateral relation. But that longstanding consensus on either side is under growing pressure as security competition in Asia intensifies and China’s global footprint continues to grow. Amid challenges from North Korea and the South China Sea to trade frictions, the next president must figure out how to deal with China.

Dennis Wilder, the former senior director of East Asian Affairs at the National Security Council for the Bush Administration, discussed the changes in the dynamic between China and the U.S. after current Chinese president Xi Jinping stepped into power in 2013. Wilder said that, unlike his predecessor Hu Jintao, Xi demanded China to become one of the countries that set up the rules for international affairs.

This wasn’t the case in the past. “Ten years ago, [China] entered the WTO [World Trade Organization] and accepted to play by our rules,” Wilder said. Wilder admitted that China’s new, more aggressive stance has been unusual and uncomfortable to the people in Washington, who weren’t used to being challenged in that way in East Asia.

Despite the complexity of the competition, both advisers emphasized the great progress made in the collaboration between the two great powers. They said that both countries had made enormous progress fighting climate change, cooperating on the obstacle of Somalia, and combating terrorism in the Middle East.

When asked about the strategies to build effective consensus with China, both advisers emphasized the need to establish a meaningful personal relationship between the leadership of both countries. Bader, who was the senior advisor on Asian Affairs for Obama’s National Security Council, talked about the mutual respect between the president and Xi Jinping, and how this personal relationship built the foundation for future discussions.

Wilder urged the American foreign policy makers to spend time and effort understanding the distinctive political context on the other side. Wilder talked about the distinctive conservative manner of the Chinese leaders due to the internal checks and balances within the Communist Party, and said patience was required in order to make progress.

During the Q&A session following their talk, Wilder and Bade touched on the security challenge of the North Korean nuclear crisis, the recent pro-democracy protest in Hong Kong, and the territorial disputes at the China South Sea.

They also gave advice to the students who are interested in pursuing a career in foreign policy. Bade said it was extremely valuable to be fluent in a foreign language. Wilder encouraged the students to pursue a certain topic in foreign policy that truly interests them. “Jobs will follow you,” Wilder said.