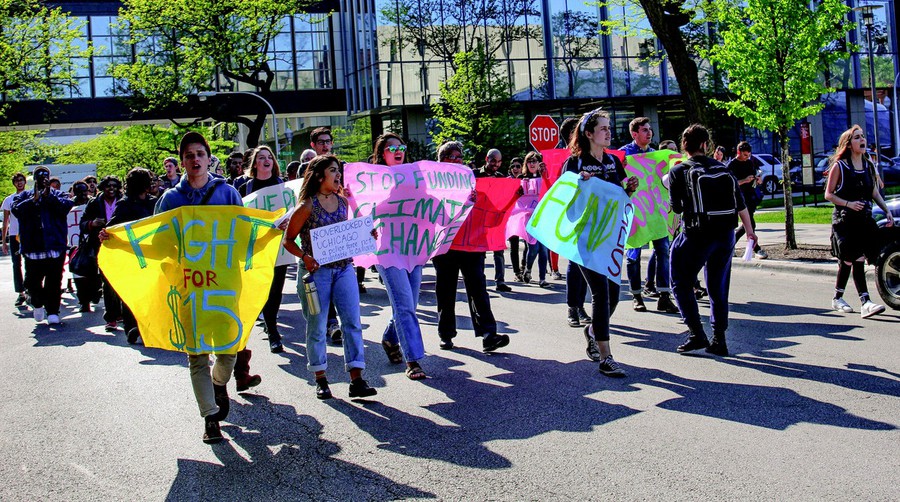 Protesters turned out last academic year at the "Rally to Democratize the University."

A coalition of student activists that supported Bernie Sanders in the Democratic primary has organized an anti-Trump walk-out and rally on Tuesday.

At 3 p.m., UChicago Student Action (UCSA) will protest the election of Donald Trump on the main quad. Student Action, the umbrella organization of UCSA, is organizing this event on 11 additional campuses, five of which are in Illinois.

“This election has brought out a terrifying sentiment in a good portion of our population,” the event description reads. “Trump’s rhetoric has emboldened white supremacists and bigots and they’re already making it clear they won’t be staying in the shadows. But we have to hold onto the hope we held for a moment in the Sanders campaign. A self-proclaimed democratic socialist won more than 13 million votes in the Democratic primary, with promises of tuition free college and single-payer healthcare. If we preserve this vision and fight for it, we can forge the multi-racial grassroots movement we need to create a world where all of us can thrive.”

According to the Facebook event, those who are outraged by “the surge in hateful violence and racist abuse sparked by Trump’s victory” are encouraged to walk out of their classes and join the demonstration.

UCSA’s campaigns are organizing for a $15 per hour minimum wage, divestment from fossil fuels, and tuition-free higher education.

The demonstration coincides with a “day of action” against the construction of the Dakota Access Pipeline. “[Come] to send a message to Obama and Trump that UChicago stands with Standing Rock,” organizer Christina Uzzo wrote to a UCSA e-mail group.

In a variety of outlets, professors consider the implications of a Trump victory.