A Day on the Jackson Park Docks

At the end of one wharf, an unruly sprawl of nets, tackle boxes, and bags full of bluegill surrounded a large, seated man. The man—let’s call him Kingfisher—said he has been fishing the Jackson Park harbors for 60 years. 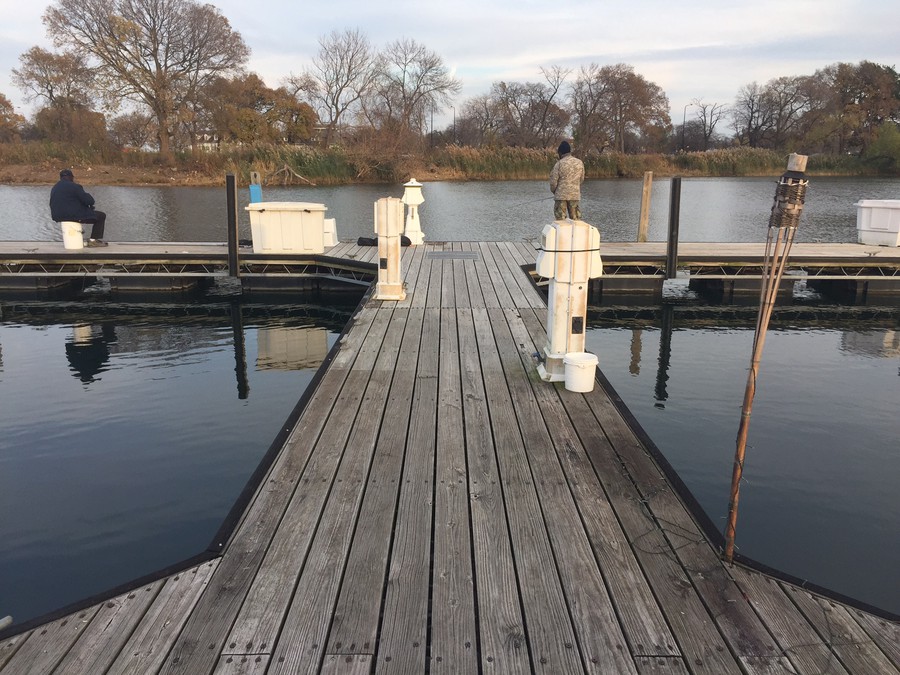 As leaves fall and daylight fades, a group of fishermen gather around Jackson Park Inner Harbor, replacing summertime boats with rods and reels.

About 25 fishermen were scattered about the harbor on a recent Sunday morning, casting lines and basking in mid-November sun.

The crowd here is not young. “I’ve been coming here since I was 13,” said Robert, a 50-something fisherman who lives “just around the corner.” Bundled up in a hat, camouflage coat, and sunglasses, Robert paced the harbor’s concrete dock, tinkering with his rod and cursing a flock of geese overhead.

Most of the inner harbor is ringed by vegetation, so the regulars populate the wharfs on the western shore. They sit on buckets, securing bait to hooks and casting lines into the blue-green water.

At the end of one wharf, an unruly sprawl of nets, tackle boxes, and bags full of bluegill surrounded a large, seated man. The man—let’s call him Kingfisher—said he has been fishing the Jackson Park harbors for 60 years.

He muttered “I don’t know” to himself every few seconds that went by without a bite.

Twenty feet down the pier, two men cast their lines in and out of the water, bantering in-between. One of the men—who goes by the name Strohs—fishes the harbor religiously. “I get back from work in the morning and come out. I spend almost all day out here fishing,” Strohs said.

What if it’s 20 degrees and snowing? “We always fish. We get out on the ice. Some of us here get out on the ice,” Strohs said, not-so-subtly indicting his counterpart as a fair-weather fisherman. The supposed lightweight—a man named Day—was not pleased. “C’mon now. I get on the ice when it’s 14 inches thick.”

Like Kingfisher, these two have frequented Jackson Park since a young age. “I was out here 40 years ago,” Day said. “Then I took a break, but I been here for the last 25.” Said Strohs, “Let’s just say I been here 30-plus.”

A nearby man, however, was fishing in Jackson Park for the first time. But Sunday wasn’t his first rodeo: “I’m all over this country. Wherever there’s water I’ll be on it.”

Tall gates line the western edge of the harbor. A digital code—or the audacity to sneak in behind an authorized vehicle—is needed to get through to the wharfs.

Outside this gated oasis, cars careen by on Lake Shore Drive. Cyclists whiz around the water’s edge. Sitting in the shoreline brush is a red-tailed hawk, eyeing passersby.

The fishermen study the water under a light breeze. The scene is quiet, occasionally splashed by intervals of small talk and profanity. Mainly, though, the harbor is governed by an easy rhythm: cast, reel, and repeat.

Across the water, a solo fisherman became impatient. Slow day? “It’s them chemtrails,” he said, attributing a lack of salmon to the vapor clouds streaked across the orange sky. “They keep the fish away.”

“The salmon come back to the harbors in the early fall. They come to spawn, laying their eggs in August, September, and October, and the older ones die out around now,” said Steve Palmisano, co-owner of Henry’s Sports & Bait, a long-standing equipment shop in Bridgeport.

As a non-native species, salmon—Chinook and Coho—were introduced to Lake Michigan in the late 1960s to prey on the abundant alewife population, Palmisano said. Although the arrival of November marks the tail end of salmon season, Jackson Park has a year-round trout population. Perch, too, swim into the harbor as the water cools.

Salmon, however, remain the prized catch this time of the year. Many fishermen here come to snag, a type of fishing that involves swinging one’s line back and forth in hope of “snagging” a salmon with a three-pronged hook. Jackson Park is one of two designated snagging locations in the city.

For some, snagging is a workout. “I come out here to get my exercise,” a local fisherman named Willie said as he wrestled with a tangled line beside his parked car on East Hayes Drive.

Snagging season runs from October 1 through the end of the year. While the Illinois Department of Natural Resources restricts the catch to five salmon per day, one Jackson Park fisherman said, “If you go home [after catching five] and then come back, then that’s different. You can fish for more. You don’t stop just like that.”

Rich, a broad-shouldered, hooded fellow of few words, was also intent on bringing home a big haul. He had already reeled in one prize: a rainbow trout, struggling to free itself from the line that Rich tied to an underwater ladder. Dinner for tonight? “It’s gonna be somethin’. I’m going to sell him,” Rich said. Where? “To my friends.” No more was said of the subject.

Jojo—a man from the Little Village neighborhood in his early forties—pointed to a sizeable salmon swimming near Rich’s line. “What does something like that go for?” Jojo asked. “Twenty, forty maybe,” Rich said.

Jojo has been coming to Jackson Park since he was nine. Pulling out his phone, he showed me a picture of his 20-year-old self hoisting a big catch. The picture was taken right where we were standing.

With his rod ready for action, Jojo scans the water. Whatever he catches, he gently returns to the water. “It don’t matter if I catch nothing. I won’t say I wasted a day. I can never go back home and be upset.”