Maroons Head to Wisconsin for Third Round 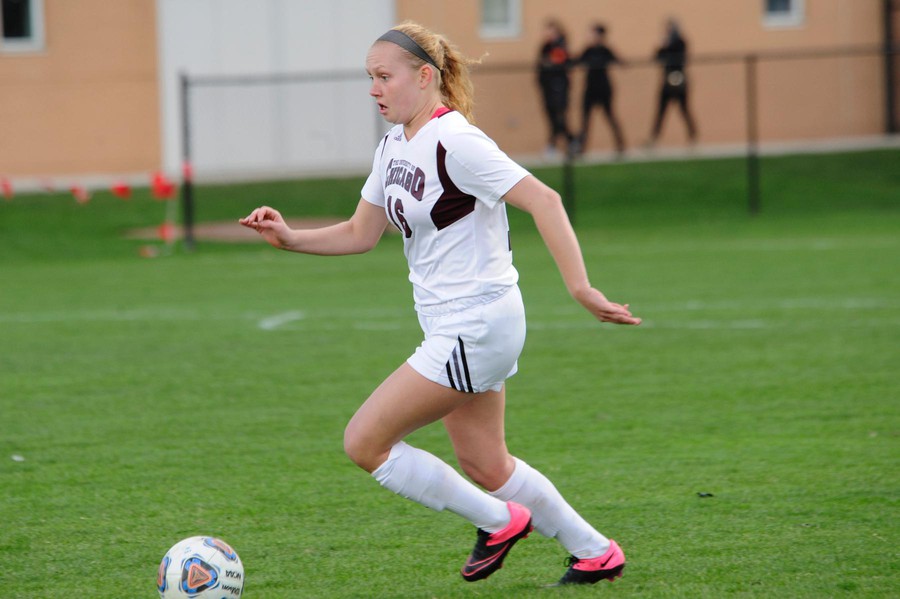 Whitley Cargile sprints up the field with great intent and focus.

This weekend is shaping up to be an exciting and nerve-wracking experience for the South Siders of Chicago. The No. 11 Maroons are set to travel to Whitewater, Wisconsin, this Saturday to participate in the third round of the NCAA DIII Championship. Riding high off of their wins against both Webster and Augsburg in the first two rounds of the Championship, the South Siders are set to face off against No. 3 Thomas More in their first away game of the tournament.

The 2016 season has been an overall successful one for the Maroons. They currently stand at No. 11 within DIII, touting a 17–3 overall record and an undefeated home record. This is a major improvement from last year’s season, which the Maroons finished out with a No. 25 ranking during the second round of the championship tournament. Additionally, their wins against Webster and Augsburg this year—although expected—were both decisive; the Maroons finished with a 2–0 win over Augsburg and an even more impressive 6–0 win over Webster.

Despite boasting a successful run thus far, the South Siders face a major challenge in the form of Thomas More this weekend. The Maroons and Saints have faced two common opponents this year: Illinois-Wesleyan and Carnegie Mellon. Both teams were successful against the former. However, the Maroons suffered a 1–0 loss to Carnegie Mellon while the Saints managed to achieve a 2–1 win. In addition, the Saints have had a near perfect season, managing to stay undefeated throughout its entirety. Their current record stands at a very impressive 22–0–1.

Going into the game this weekend, the Maroons seem to be conscious of their disadvantage. “This of course is a huge game for us. Thomas More is ranked number three in the nation, and last year they ended our season in the tournament,” said third-year midfielder Kelsey Moore. “Practice this week will be very focused and will aim to give us the edge that we need on Saturday.”

The Maroons’ loss against Thomas More last year was indeed a disappointing one. As Moore said, the Maroons’ 1–0 loss against the Saints in the second round of the tournament was what ended the South Siders’ season.

Despite going into the game as underdogs, morale seems to be high amongst the South Siders. “Our team has been incredibly supportive of one another this season, which has created a cohesiveness that has been integral to our success thus far,” Moore continued. “The soccer part is of course the most important, but I believe the culture we have created this season is what will take us that much farther.”