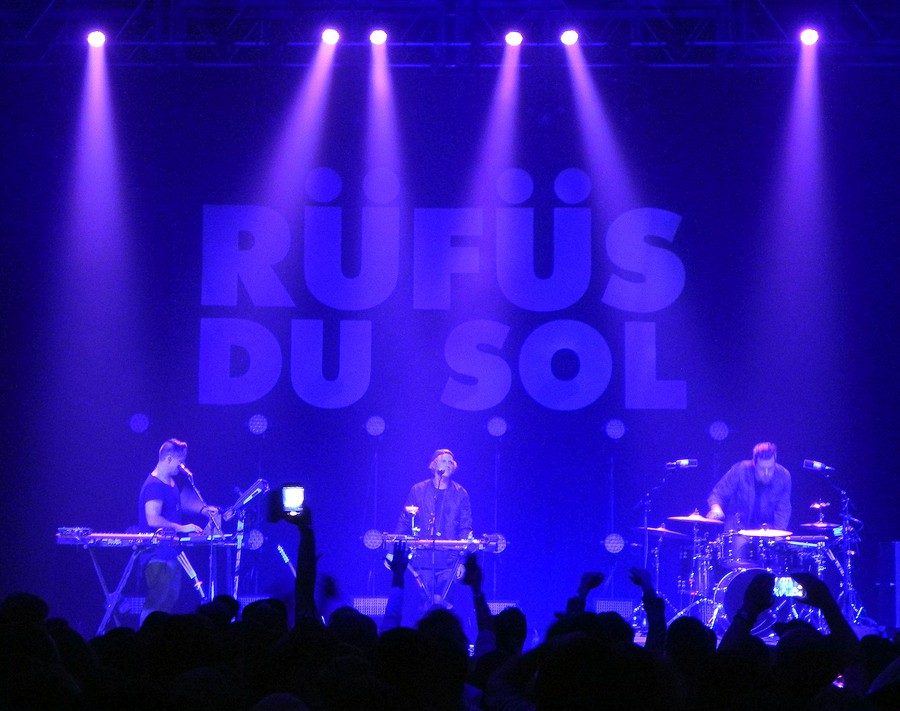 “We wanted the album to have an aquatic feeling, like you’re underwater and shit,” said Rüfüs Du Sol's James Hunt.

RÜFÜS DU SOL, also known as Rüfüs, is an alternative electronic trio from Sydney, Australia, consisting of vocalist Tyrone Lindqvist, keyboardist Jon George, and drummer James Hunt. Rüfüs has performed at prestigious electronic festivals around the world, including Coachella, Lollapalooza, NSW Bluesfest and Splendour in the Grass—it has also toured with the likes of Odesza and Hermitude.

Its current tour, promoting Bloom, is the first the group has done internationally. Like its predecessor, Atlas, Bloom reached the number one spot on the Australian Albums Chart.

Much of Bloom includes sampling from soul, hip hop, and disco, making it difficult to categorize Rüfüs’s genre, which ranges from indie dance to electronic to rhythms reminiscent of tropical house. When asked about the inspiration behind the album, Hunt revealed that “bloom” was the term that denotes a group of jellyfish. “We wanted the album to have an aquatic feeling, like you’re underwater and shit,” he said.

The aquatic feeling isn’t just transmitted through the album’s sounds. The album art, designed by Jack Vanzet, embodies fluidity and movement in the form of color, resembling an image of haphazardly swirled paint. Hunt praised its “organic” and “otherworldly” feel, descriptors equally valid for the music on the album.

Bloom represents a clear maturation from Atlas, as the synths and warps in each track are more complex and idiosyncratic here. Hunt said the band learned to better accept the imperfections in music, disclosing that the most popular track on the album, “Innerbloom,” was actually the first demo take. Since then, the track has been remixed by What So Not, Lane 8, Sasha, and Andhim.

“We wanted a bit more nakedness, a bit more rawness,” Hunt said of the album’s vibe.

Rüfüs played to a sold-out crowd on Friday night. George and Hunt were positioned on either side of Lindqvist, at times hitting their steel drums in call and response. Lindqvist’s voice, as smooth and velvety as it is on recordings, had a relaxing and continuous quality: He drew each word long and with muffled enunciation, its sound a highlight of the night. All the music on Friday was performed live, with Hunt animatedly striking the drums and George delivering playful chords and sequences on keyboard. At one point, opener Dena Amy joined Rüfüs on stage and sang a duet with Lindqvist, who revealed afterward that Amy was the voice on the Bloom track “Hypnotised.”

While the tour celebrates the release of Bloom, Rüfüs performed a few hits from Atlas including “Sundream,” “Take Me,” and a personal favorite, “Desert Night.” “Desert Night” has an especially tropical feel to it, punctuated with light, airy marimba notes and a light percussion pattern featuring the hi-hat and cabasa. Combined with Lindqvist’s voice, you can’t help but feel like you truly are walking in a desert at night.

“We always like to tell our audience what RÜFÜS DU SOL means,” Lindqvist divulged on stage toward the end of the concert as the mood became more intimate. “It’s a place—a place we like to bring our audience to. We love this place, and we hope you love it, too.” (I later googled whether RÜFÜS DU SOL was an actual place, to no avail.)

As for what Rüfüs is up to next, it’s planning on touring until most of next year, though Hunt admitted all three of them are “getting hungry again to write” and “getting that studio bug” after being on the road for so long. A possible record next year is not out of the question.

When asked if there were any memorable or funny stories from the tour, Hunt was at a loss. Bloom is the first bus tour that the band has done, so Hunt admitted that every day seemed to blur and blend together—much like how jellyfish blend into a bloom.