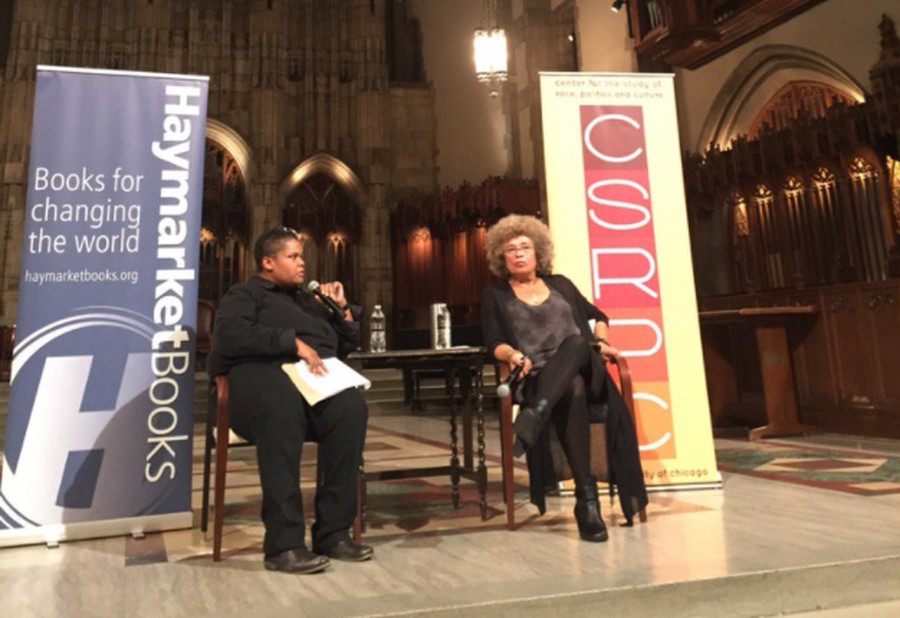 Courtesy of The Center for the Study of Race, Politics, and Culture

Social justice activist Angela Y. Davis addressed a full house at Rockefeller Memorial Chapel on Wednesday to discuss the presidential election and her latest book Freedom Is a Constant Struggle: Ferguson, Palestine, and the Foundations of a Movement.

Davis was a long-term member of the Communist Party and an affiliate of the Black Panther Party. In 1970, she was accused of providing weapons used to take over a Marin County, California courtroom. Four people, including a prosecutor, were killed in an exchange of gunfire. Davis maintained her innocence, and became a cause célèbre before being acquitted two years later.

In the time since, she has taught and lectured at a number of American universities and has advocated for numerous radical causes, including abolition of the prison-industrial complex. She ran for vice president twice on the Communist Party ticket in the 1980s, and today holds the chair of Distinguished Professor Emerita in the History of Consciousness and Feminist Studies Departments at the University of California, Santa Cruz.

The talk explored the idea that the election of Donald Trump proves that America is not a post-racial society.

“Do you remember how it felt this time, last week?” Davis said once she reached the podium. “We all felt like we had the rug pulled out from under us. I remember hearing the news at 3 a.m., and trying my best to go to sleep. Because I remember the 2000 election when Gore had been elected, and then I went to sleep, and then…you know the rest.”

Davis suggested the method opponents of Trump should use going forward is “experiencing, and building, and rebuilding, and consolidating a community. Community is the answer. By recognizing that we will have to struggle over the coming years. . . Because freedom is a constant struggle.”

She acknowledged that liberals may have been complicit in Trump’s win, because “we were overconfident that there was no way Trump could win,” given his treatment of women and his racism.

Davis also blamed Hillary Clinton for failing to incorporate intersectionality into her ideal of feminism, and instead holding to an outdated notion based on white middle-class women.

“We need a complicated narrative that blends all forms of justice together,” she said. “And none of the candidates reflected a sense of the interrelationship, the interconnectedness, the intersectionality of our struggles.”

She went on to analyze how, within the Electoral College system, Trump could have won despite the fact that he was not preferred by a majority of those who cast their vote. After all, a majority of black and Hispanic women (and women overall) preferred Hillary Clinton, while nearly half of eligible voters did not cast a ballot at all.

“They don’t recognize that [Black Lives Matter] is not a statement of exclusion. It is the most inclusive possible statement,” Davis said to great applause. “If we reached a point that black lives really did matter, it would clearly mean that all lives matter.”

Davis also expressed solidarity with the Palestinians under Israeli occupation, warned against the alienation and inherent racism of global capitalism, and envisioned an America that provides free healthcare and free education and stands with its undocumented immigrants.

She holds hope that through widespread organizing and radicalizing our struggles, it will be possible to achieve a kind of intersectional justice.

“I always insist that movements have to be led by young people. That is the only way we’re ever going to change.”