Chicago is One of the Final Four 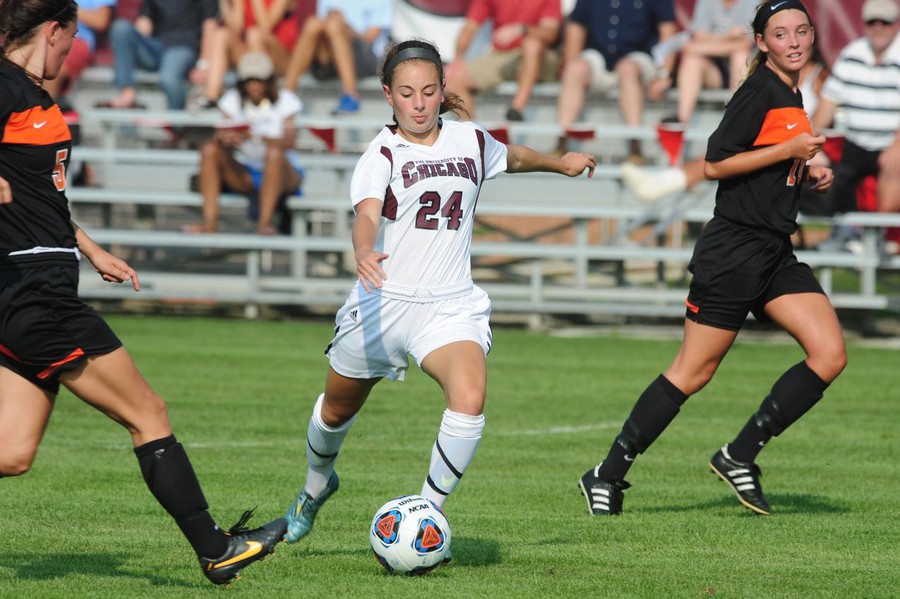 The No. 11 women’s soccer squad (18–3–1) is on its way to making history, winning two games this past weekend to propel them to the Final Four of the NCAA DIII Championships.

Playing in Whitewater, WI, the Maroons kicked off the weekend with an upset against No. 3 Thomas More by a score of 3–1 in the Sweet Sixteen matchup on Saturday. The Saints entered the match undefeated in the season, also having beat Chicago last year in the NCAA tournament.

First-year Hanna Watkins got the Chicago offense going, netting a goal in the 26th minute of play. Approaching the halfway mark of the match, second-year Sydney Mathis scored one of her own to put the Maroons up 2–0 going into the break.

In the second half, second-year midfielder and UAA Player of the Year Jenna McKinney scored the squad’s third and final goal of the game, also bringing her own scoring tally to 14 on the season. The Saints’ offense finally found a rhythm in the remaining 30 minutes of the game, but first-year goalkeeper Katie Donovan’s six saves in the second half proved to be too much for Thomas More, who was only able to net one goal in the 77th minute.

Next up was No. 18 Pomona-Pitzer (17–1–3) in the Elite Eight round of the tournament. Despite Chicago’s offensive control throughout much of the game, it was the Sagehens who scored first, just five minutes into the match. The Maroons had a 35–8 shot advantage with 15 shots on goal, but were unable to convert until two minutes before the final whistle would have blown, in the 88th minute.

Third-year Mia Calamari, who holds the Chicago record for career assists, did what she does best and put Watkins in scoring position. The first-year was able to find the back of the net to tally her second goal of the weekend and tie the score at 1–1, where it remained through regular and extra time.

The game then entered penalty kicks. Luckily for the Maroons, it was Donovan in net, which has been a clutch factor for the squad all season. In the round of PKs, fourth-year Sophia Kim made one for Chicago, while Donovan blocked Pomona-Pitzer’s attempt. From there, it was a battle, but Chicago came out victorious, 6–5.

“[On Saturday] despite being scored on early, our team never wavered in our effort or confidence in our ability to get the job done,” Calamari said. “From the moment the first goal was scored to the last PK save Katie Donovan made, our team fought for that win.”

After a short hiatus for Thanksgiving break, the South Siders will travel to Salem, VA to compete in the NCAA DIII Final Four against No. 5 Messiah College. This marks the Maroons’ fourth trip to the Final Four, all coming under current head coach Amy Reifert.

Final Four play requires maturity and composure, both of which Chicago has demonstrated thus far, despite the squad’s young age. “We will continue to fight to improve in practice and look forward to competing at the highest level in December,” Calamari said.

On the squad’s accomplishments, Calamari said, “I’m incredibly proud of our team, not only for this past weekend but for an entirely amazing season thus far. From our leadership to our freshman class, every single player has been committed to doing what it takes to win games.”

The Maroons will kick off against Messiah on Friday, December 2 at 5 p.m. EST.