"Electra"fying Performance at the Court Theatre 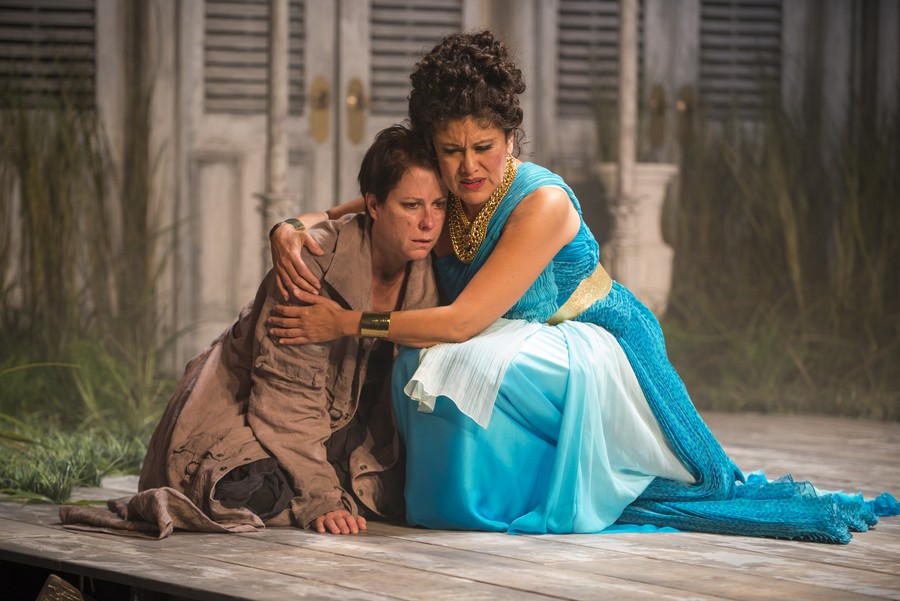 Electra (Kate Fry) and Clytemnestra (Sandra Marquez) are at the heart of this family tragedy.

I’m the first to admit that I know very little about Greek tragedies. I gained most of my Greek theater knowledge from a few brief high school readings (tragic in their own way). But, Court Theatre’s Electra, the final production in their three-year House of Arteus cycle, is stunning, thought-provoking, and accessible even to those who may not be well-versed in Greek tragedy.

The play is a continuation of last fall’s Agamemnon, in which Clytemnestra kills her husband Agamemnon in a fit of grief and vengeance over his murderous sacrifice of their daughter Iphegenia. Electra picks up with their other daughter, Electra, who mourns her father’s death as she lives under her mother’s unjust and tyrannical rule. She throws herself entirely into her sorrow as she awaits the return of her brother Orestes who will help her kill Clytemnestra and her new lover, Aegisthus. All the essentials are present: love, murder, and complicated family dynamics.

Electra’s cast keeps all of these charged emotions in excellent balance. “[T]he thing that I have learned about Clytemnestra over these three years is that she runs the gamut of human emotion,” said Sandra Marquez, the actress who plays Clytemnestra said. “She is so often thought of as simply a villainous angry woman, but…is more than that. She is a woman who would have been happy to be a mother loving her children and a queen enjoying her rightful place in the palace and polis, but life dealt her a different hand.”

With her strong will and intimidating presence, Clytemnestra, the powerful matriarch who has been the consistent point throughout this trilogy, clashes directly with the brute force of emotion within Electra (Kate Fry). Electra’s despair over her father’s death is just part of her commitment to justice. Electra’s sister, Chrysothemis (Emjoy Gavino), is the rational, prudent one, steady as a pillar in contrast to her sister’s turbulence. The intricacies of their relationships are drawn out by a seamlessly integrated three-woman chorus, blending rhythmic and movement-based elements in a haunting, ethereal manner.

Electra definitely asks more questions than it answers. Reflecting on her character, Fry asks, “[H]ow much of [Electra’s] grief is propelled by her sense of justice, making sure that all who live never forget what happened to her father?” Similarly, we wonder: Are her actions satisfying? After the final words of the play, is the cycle of violence truly broken? While deeply rooted in the Athenian theater tradition, Court’s *Electra* provides a lens through which modern viewers can confront these questions.

Court’s "Blues" Provides a Window Into a Renaissance