The University should have sent students a warning before the Halloween “purge.” 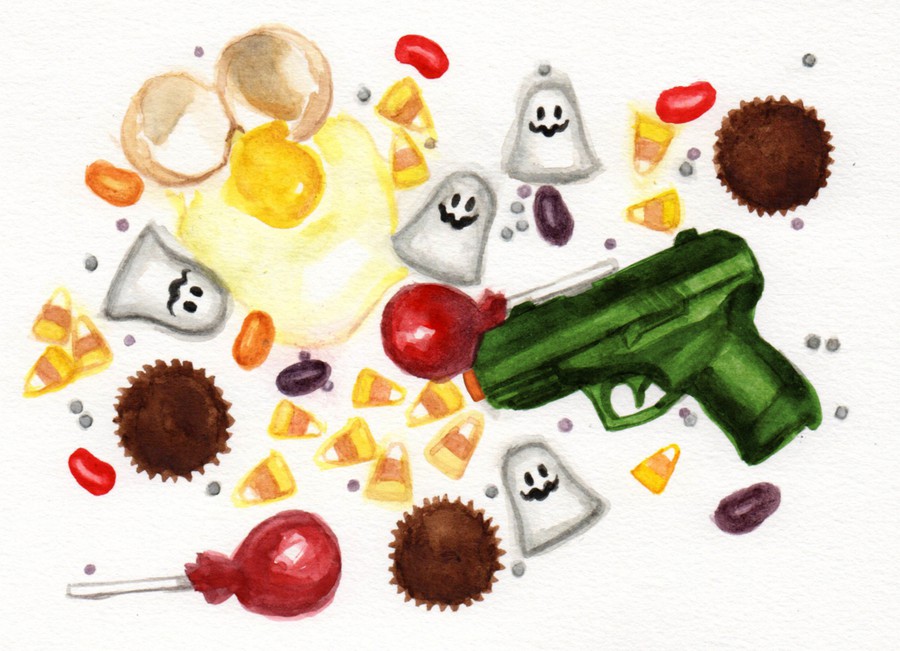 Last Saturday, 500–600 high schoolers from around Chicago came to Hyde Park. There were scattered fights, eggs thrown at businesses, and at least six bystanders shot with BB and paintball guns, including one UChicago student who was struck in the head by a metal pellet that drew blood.

On Monday, Kenwood Academy sent a school-wide e-mail informing parents that there would likely be a “Halloween purge” that night, and that administrators had notified the Chicago Police Department (CPD) and the University of Chicago Police Department (UCPD). “Please contact your student and inform him or her to go directly home after school,” read the e-mail statement in part. “Also, please inform your student not to visit 53rd street at dismissal,” and, “do not allow your student to ‘hang out’ tonight in the Hyde Park neighborhood.”

The Deputy Chief of the UCPD sent a similar e-mail, obtained by The Maroon, to some Hyde Park businesses on Monday afternoon, also warning them that “there again may be increased activity and disorderly conduct along 53rd Street this evening.” However, no such warning reached UChicago students, many of whom live on or around East 53rd Street in off-campus apartments. Considering the UCPD’s heavy involvement on Saturday, the University should have followed Kenwood Academy’s lead by sending a University-wide e-mail warning students to steer clear of the area. If the University thought that the area would be unsafe for businesses, it probably thought it would be unsafe for students as well. Although it is unclear as to why the administration did not send out a University-wide security warning, it seems clear that it should have.

Over Halloween weekend, two adults were attacked by teens, with one declining medical attention and the other reporting two black eyes, telling DNAInfo that his “life was damaged” from the encounter. The window front of a dollar store as well as the windshield of several parked cars were shattered. Teens threw eggs at officers, passersby, and police vehicles. One individual allegedly climbed into a police car and tried to take a phone from inside, while another allegedly tried to obstruct an arrest by kicking an officer. At least 10 people were arrested—most placed in custody for small offenses. Officers instructed parents out trick-or-treating with their kids on East 53rd Street to head to East 57th Street and told The Maroon’s reporter to leave the area.

It is wrong to use the events over Halloweekend to exaggerate the level of crime in Hyde Park, as one of the victims did, calling Hyde Park “straight up Somalia.” Of Chicago’s 77 community areas, Hyde Park is 46th in incidents of violent crime per person reported in the last year, according to CPD's CLEARMAP. As we reported in April, violent crime in Hyde Park continued its long-term decline into this year, and data doesn’t indicate a substantial change since that article was published. The events of last Saturday and Monday were unusual, but that’s exactly why they deserved unusual attention from the University with some form of announcement or warning.

53rd Street is the hub of Hyde Park and the center of off-campus UChicago activity, meaning that many students and faculty living in the area or getting dinner at any one of the dozens of restaurants on 53rd at the time found themselves stuck in the middle of a tense and chaotic scene. Though the news circulated slowly on social media, much of the community was in the dark for most of the night.

The University clearly suspected that this “purge” would occur, given the notice from Kenwood High School, its deployment of the UCPD to the area to aid CPD, and the e-mail statement to businesses in the area. Nevertheless, it chose to not share its knowledge with students either before, during, or even after the events. At the very least, the Office of Safety and Security could have sent an e-mail alert on Monday summarizing the activity of Saturday night and warning that similar activity was predicted for that afternoon and evening.

The University should have communicated updates to its students as part of its commitment to “providing a secure environment for the campus community.” If the area was dangerous enough for officers to advise families, store owners, and our reporter to leave, it was dangerous enough to warrant an e-mail to students.

By Pete Grieve and Jamie Ehrlich

On Saturday night, multiple individuals reported being shot with metal pellets and paintball guns in the same vicinity.

Violence and Vandalism in Hyde Park Over Halloween Weekend