The Time to Move Forward Is Mao

RevCom has officially overstayed its welcome. 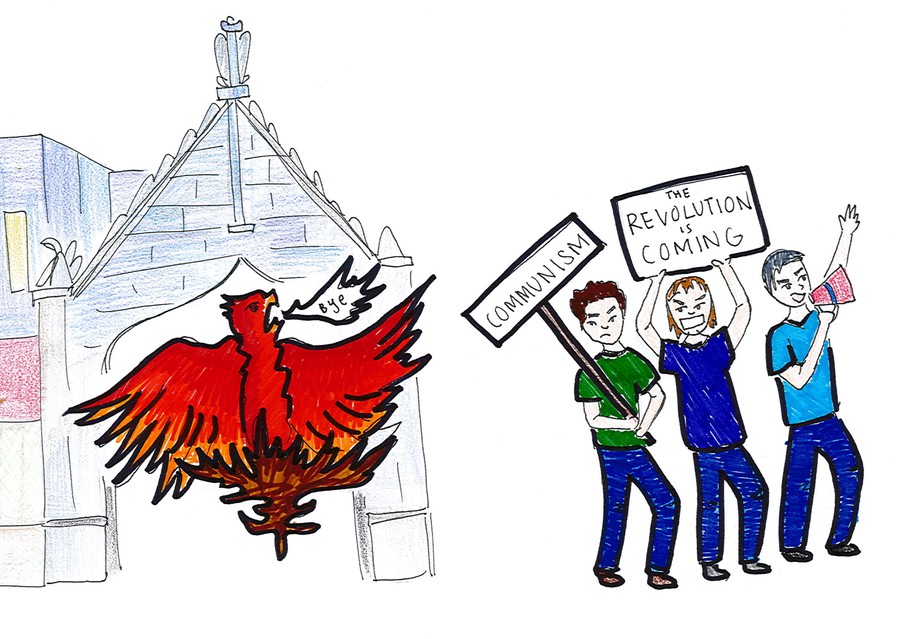 On the day of College registration during O-Week, I thought the communist presence on campus was pretty funny. I took Snapchats of their pamphlets and smiled at all of the middle-aged revolutionaries trying to draw in young, impressionable college students to their movement. This is not me anymore. I am exhausted.

It’s one thing to try to spread awareness for a cause, but it’s an entirely separate issue when disruption of everyday life becomes the primary intention. It doesn’t matter what the cause is; the only thing that matters at this point is how annoying they’ve become.

This marks the seventh week that Bob Avakian’s Revolutionary Communist Party (RevCom) has been on campus. The group espouses radical communist ideology, often calling for a complete overthrow of the American government in favor of a Maoist regime which would probably be headed by the cult-leader the group lovingly calls “Chairman Bob.” At this point, it’s impossible to walk through the quad without its members offering a pamphlet, all the while muttering about how their free speech is not protected. Being handed a pamphlet obviously is no tragedy, but after seven weeks it’s absurd to think that there are still people who could be convinced to join their cause or that their First Amendment rights are being violated. It’s clear that their intention is not to spread their message, but to push UChicago’s commitment to free speech as far as possible, even going so far as to commit illegal acts. If this was truly about just sending out a message of an ideology, then they should realize after seven weeks of little to no success that UChicago is a lost cause and it’s time to move on and spread the revolution elsewhere.

My initial moment of irritation with the RevCom demonstrators was when they stepped on the American flag in order to prove that “America was never great.” Although I fully disagree with standing on the flag, it is understandable that they would commit such an act as radical communists. However, there’s no reason why they need to stand in the path of students going to class and proceed to heckle them when the students don’t pay attention to their unpatriotic antics. Furthermore, they repeat the same tactics over and over again, receiving very little support, which, to say the least, is baffling. They are not achieving anything new by repeating this action at multiple times. All they are doing is proving themselves to be nuisances on campus. So why continue protesting at UChicago?

While standing on the American flag was frustrating, the RevCom demonstrators’ progression to trespassing in Baker Dining Commons posed a more serious problem. Not only do RevCom’s members somehow not yet understand that they have full exposure on campus, but they also believe basic laws do not apply to them because their protest was in the name of free speech. Following the arrest of Noche Diaz for trespassing and standing on a table in Baker, members of RevCom became outraged, not realizing that they were not being silenced, but rather were being held responsible for their illegal actions. The October 31 edition of RevCom’s Revolution newspaper falsely claimed that their protesting began “mid-October,” and that their presence led to “swift and brutal” action from authorities. RevCom is intentionally lying to prove that UChicago isn’t as committed to free speech as it says it is. Its members have been able to protest and organize on campus for weeks, with only limited action from the University of Chicago Police Department (UCPD) (telling the protesters to not block the public’s way) before the incident in Baker. UChicago has been more than accommodating to their ridiculous movement, so to say that their freedom is being attacked is ludicrous.

At first, RevCom’s presence was amusing, but now it’s anything but. While I see no reason why RevCom has any reason to stay on the UChicago campus, its members still have every right to be here. UChicago has been extremely tolerant of their presence despite what they may believe about the University engaging in a conspiracy to suppress their freedom of speech. Purposefully provoking the UCPD by engaging in illegal activity proves that they’re disrupting student lives just for the sake of disruption. They need to know that, as students, we are not supporting them and we have much greater concerns than their communist sideshow.