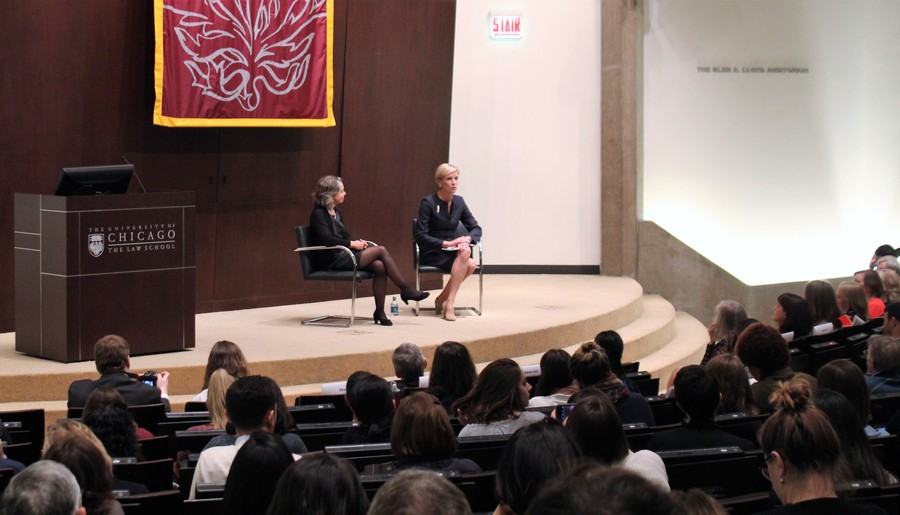 Planned Parenthood’s president visited campus Tuesday to speak about the future of reproductive rights after the 2016 election turned into an almost uncontested triumph for politicians opposed to her organization and its goals.

Cecile Richards spoke to an audience of about 300 at the Law School for the 2016 Ulysses and Marguerite Schwartz Memorial Lecture, hosted by the Law School and the Center for the Study of Gender and Sexuality.

Richards’s speech was by turns forceful, dispirited, and hopeful, calling the incoming administration “hostile to women’s health” while encouraging students to remain involved in grassroots organizing, particularly at the state level.

She began by outlining the history of Planned Parenthood, stating that the last hundred years of its existence show “the world doesn’t stop spinning,” and that, despite expected setbacks over the next four years, the organization would not give up on defending “reproductive rights and women’s health care.”

“In our second century, Planned Parenthood is doubling down on our commitment to building a future where access to health care, particularly sexual and reproductive health care, is a reality for everyone, and we aren’t going to let anything…get us off course,” Richards said. She called for a renewed focus on specific women’s stories and for solidarity among progressive organizations.

Most of the questions following the event asked what practical steps Richards would recommend pro-choice activists take over the next four years, although one question asking Richards to define the difference between a fetus and a baby prompted gasps from the audience.  Richards responded that “a fetus hasn’t been born yet, and as a mother of three I know about this intimately…. I’m not exactly sure what you’re getting after.”

Students’ reactions to the talk varied.  “I think we’re all really worried about what’s going to happen, and I wish there had been a little more detail about what’s happening with the law right now, but I think it was good to be in the same room with somebody who’s got a plan, is inspiring, and still trying to move forward,” Ashley Roybal-Reid, a student at the Law School, said.

Renee Winget, a second-year in the College, said, “A lot of advocates for women’s health are in a very distraught place, so I think she did a great job of being practical but also inspirational.”

By contrast, Malloy Owen, a third-year in the College, said, “The way that she wove the issue of abortion in with issues that aren’t intrinsically related to it, and implicitly made the case that an attack on one of them is an attack on all of them, I thought was misleading.”

A small group of anti-abortion protesters gathered outside the talk, holding a sign that read “Cecile Richards: What is His Future?” above an image of a fetus.

The daughter of a former Texas governor and a civil rights lawyer, Richards began her political activism at a young age.  Before becoming president of Planned Parenthood in 2006, she served as deputy chief of staff to Representative Nancy Pelosi, and founded several liberal nonprofits.  She also serves on the board of the Ford Foundation.