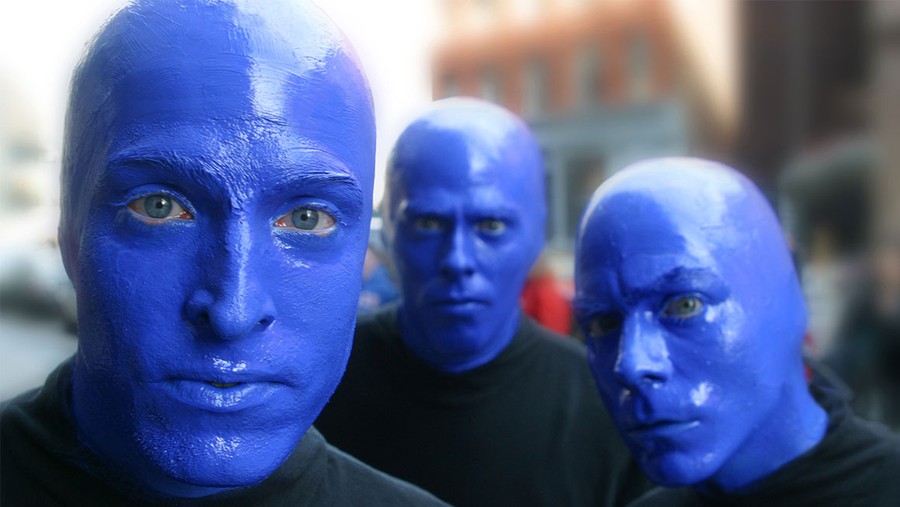 Well-established in cities across America, the Blue Man Group continues to draw crowds to their unique blend of performance art. The atmosphere of Briar Street Theater, home to Chicago’s Blue Man Group, is immediately different from that of Lakeview Street. The walls of the lobby are covered with PVC pipes and the music has a thumping bass. The lobby and the auditorium are bathed in blue light, transforming spectators into blue men too.

The first glimpses of the show’s apparent message (and quirky style) appeared in the form of a screen with red lettering sliding across it, commanding the audience in a list of zany tasks. We spoke, rather than sang, “Happy Birthday” in unison to a mysterious birthday boy. We instructed a woman with a headache to envision her cerebral ailment as a cheerful grazing cow, and then slaughter it. We all screamed together, and the curtain opened.

With their audience primed for unsettling silliness, three performers indistinguishable from one another and slathered in avocado-based cerulean paint appeared on stage. The center Blue Man beat out a rhythm on a large, upright drum while the other two poured on paint, which splashed rhythmically onto the stage and the first few rows of the audience. The percussion acts continued to impress throughout the show, done with unusual objects like PVC pipes and handfuls of cereal.

The band performing alongside was as skillful as the main act. Their smooth (and sometimes raucous) background music set the mood for the performance.  At one point during their riff, an audience member cried out, “Free Bird!” The band picked it up with such fresh energy that I was surprised and disappointed to learn later that the caller was an audience plant.

The Blue Men’s sketches played with some big ideas. The overarching theme was conformity, which we already experienced at the beginning when we chanted in unison in response to the red-lettered screen. The screen's decrees kept cropping up throughout the show. Later the audience uniformly performed “rock concert moves” like the “one-handed fist-pump” and the “raise the roof” as instructed by a digital stick figure,

The conformity call-out was driven to an uncomfortable extreme during an act entitled “The Feast,” during which the Blue Men brought an audience volunteer to the stage to eat Twinkies together. When the three Blue Men held up a bite of Twinkie on a fork held in their left hands, they looked expectantly at the volunteer until she held up her Twinkie’d fork as well.  Seeing that she was using her right hand, all of the Blue Men transferred their forks into their right hands to match. Later in the sketch, one of the Blue Men used a Shop-Vac to suck the woman off of the copy of Andrew Wyeth’s “Christina’s World” that had been hanging in the background, undermining a painting that has become a classic representation of an individual’s spirit. The audience roared with startled laughter.

While the conformity theme hit home, the Blue Men were less successful in exploring the theme of humans and technology. Eight-feet tall iPhone look-a-like devices called “GiPads” descended from the ceiling and displayed factoids meant to induce guilt about the amount of time modern Americans supposedly spend with technology at the expense of our interpersonal relationships. Besides being annoyingly preachy, the act and others that referenced modern technology felt hopelessly outdated. The GiPads looked like iPhones from around 2010, an unfortunate testament to how difficult it is to keep a critique of technology in a show up to date at a time when technology is changing at an alarming pace. The technology segment was a poorly executed part of an otherwise funny, weird, and thought-provoking show.

Blue Man Group is an art piece that is not only highly enjoyable at the surface level but also rewarding for viewers looking deeper. Throughout, the conformity motif was consistent and the percussion was tight. Despite occasional hiccups in execution, the Blue Man Group was an excellent way to spend a Thursday evening.