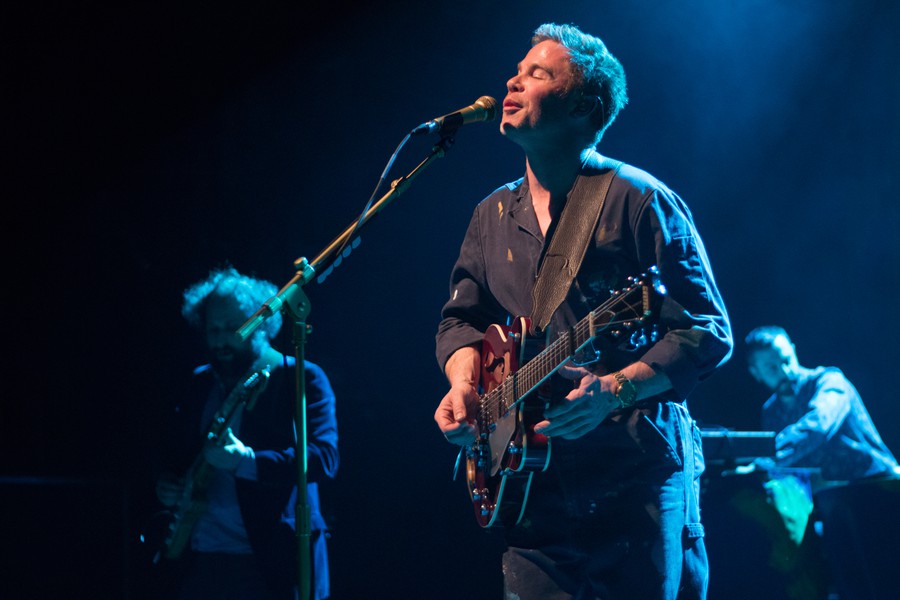 On Friday, January 29, the Riviera Theatre played host to both Elephant Revival and Josh Ritter, currently on his Sermon on the Rocks tour.

The street just outside the Lawrence Metrais is relatively unlit, but everything changes once you turn the corner onto Racine Avenue. The Riviera Theatre is stunning at night—its marquee beams brightly and the name of the night’s headliner stands out in sharp contrast, promising an evening of great music.

Last Friday, singer-songwriter Josh Ritter played at the Riviera as part of his nationwide Sermon on the Rocks tour. Opening the show was Elephant Revival, a five-piece folk band from Colorado that sounds just as good with their instruments as they do a cappella. They played on a range of instruments, from the washboard to the djembe to the violin. They were the perfect opening act for Ritter, who’s known for his diverse style.

As demonstrated on the Riviera stage, Ritter is an extraordinarily versatile artist. Some songs, like “Cumberland,” are distinctly bluegrass; others, such as “Right Moves,” are purely rock-and-roll. His unique brand of Americana fuses both electric and acoustic sounds, incorporating intense riffs and intricate finger-plucking on his guitar.

Ritter sang of home, opening and closing with songs about his hometown. He began with the gentle “Idaho,” during which the crowd whispered “Idaho, oh Idaho” with each refrain. He ended with the more upbeat and amplified “Homecoming,” singing decisively, “I’m headed home.”

An eloquent songwriter, Ritter is more than just a musician—he is a lyricist, a poet. For example, he opens “Kathleen,” one of his best-known songs, with the line: “All the other girls here are stars, you are the northern lights.” Toward the end, he sings, “I won’t be your last dance, just your last goodnight/ Every heart is a package tangled up in knots someone else tied.” In “Change of Time,” his first encore piece, he describes waking up to see his lover and thinking, “Your shoulder blade, your spine/ were shorelines in the moonlight.”

The best part of Ritter’s show was his infectious energy and optimism. He never seemed to stop smiling, not during his more poignant pieces or even when he flubbed the lyrics to a song. “That has never happened before in my life,” he said, laughing, as the crowd cheered. The audience constantly followed his lead, singing along to “Where the Night Goes” and clapping hard during “Getting Ready to Get Down.”

Throughout the night, Ritter always tried to engage everyone in the music. In many pieces, such as “Seeing Me ’Round,” he let the rest of the band have their moment on stage with extensive solos. During the last song, he raised the microphone high above the ground and pointed it at the audience so that everyone could sing along with him: “Homecoming, homecoming, homecoming.”

Near the end of the concert, Ritter performed a cover of “Engine Engine #9” by Roger Miller. Explaining what the song meant to him, he said that Miller made him feel like everything would be okay when he felt down. Listening to two hours’ worth of country, rock, folk, love, and pure fun, Ritter’s concert certainly did that for me.