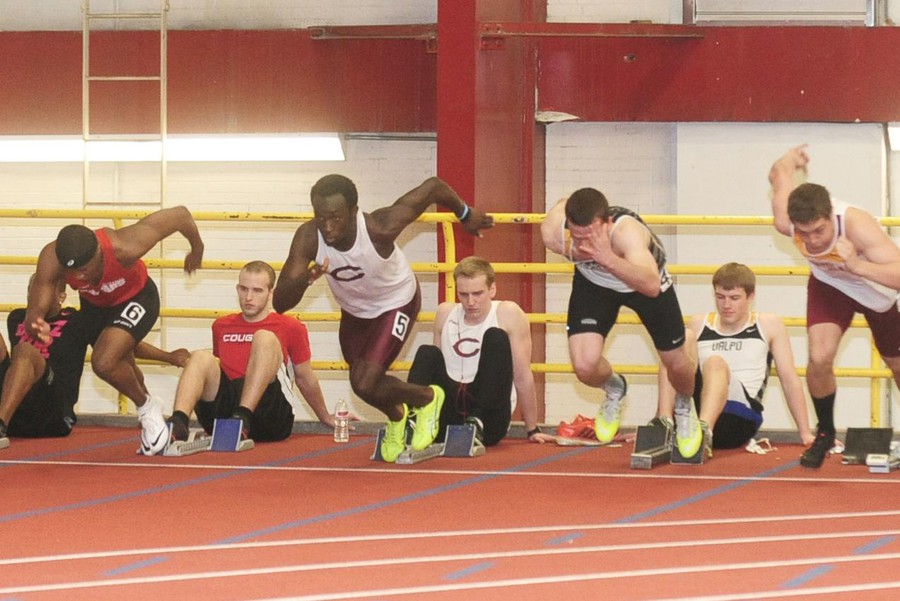 Third-year Temisan Osowa gets out to a quick start in the 2015 Windy City Invitational.

When the Chicago men and women showed up at UW–Whitewater this past weekend, they knew it would be their toughest test yet. The men entered the meet alongside six teams ranking in the top 10 nationally. The women’s event was not quite as loaded as the men’s: the No. 8 Maroons were joined by the No. 4 Titans of UW–Oshkosh. When the Maroons set foot on the purple track at Kachel Fieldhouse on Friday, they knew they would need to be at the top of their game.

Up against such stiff competition, second-year Nathan Downey understood the challenge. However, he noted that this level of adversity aligns perfectly with his own unselfish philosophy: “Go every time so others may every time.” He delivered, placing fifth in the 400-meter dash with a personal record of 50.08 seconds, and paved the way for a good Maroon showing.

Third-year Tima Karginov was a bright spot for the Maroon men who are still “putting the pieces of the puzzle back together…before [they] take another shot at a UAA title.” Karginov said, “racing at Whitewater is always a fun experience.” Every time Chicago races there, he “warms up outside: it’s 20 degrees, pitch black, the ground is covered in snow, and no one is braving the weather other than [himself] and [his teammates] preparing for the race.” During his victory in the 5K race, the serenity of his preparation and the atmosphere stayed with him. Karginov explained, “I felt calm and composed throughout and ran even splits right to the end.” The support from his teammates followed him through every lap and helped urge him on, but Tima admitted that at the end of the day he and his fellow runners are “really doing this for CHall.” CHall refers to the team’s head coach, Chris Hall.

The women must have felt similarly about the atmosphere, as they were the real story of the day, taking first place in the meet over UW–Oshkosh by half a point. The podium looks ever so sweet from its apex, and the Maroons got there with a handful of remarkable performances. Third-year Michelle Dobbs ran a sensational 800-meter, finishing in 2:14.27 and beating the next runner by more than five seconds. This was the fifth best time posted all season in DIII. In the mile, fourth-year Brianna Hickey was able to edge out Emily Paull of Aurora University for the top spot, and second-year Cassidy McPherson followed not too far behind to take fifth place. Neither of those races held a candle to the 5k, though. The 5K was instrumental in the Maroons’ clinching the top spot. Second-year Khia Kurtenbach (17:45.48), fourth-year Minnie Horvath (18:19.63), and second-year Claire Costelloe (18:36.23) took first, second, and fourth place, respectively. This single race garnered the Maroons 23 of 109.5 points and set the Maroon women up to shock the Midwest in the 4x400.

Coming into the 4x400-meter relay, the women of Chicago needed a first-place finish to take the meet from the seemingly firm grasp of UW–Oshkosh. Not only did the Maroons deliver, but the team of first-year Emma Koether, fourth-year Mikaela Hammel, first-year Nicole Vacaguzman, and third-year Michelle Dobbs ran an absurdly fast 3:56.12. That tie was good for the third best 4x400-meter this year. Their average split would have taken first place in the 400-meter dash earlier that day.

The starting runner for the 4x400, Koether joined high jumper Alex Thompson as a first-year standout for the meet. In addition to her participation in the blistering 4x400-meter relay, Koether also placed fourth in the 200-meter dash in a very quick 26.40 seconds. Thompson made a splash, winning the high jump with a clearance height of 1.65 meters (5 feet and 5 inches). If the two continue to develop and grow, they could make invaluable contributions this season and be Maroon mainstays for a long time to come.

Reflecting on the meet, 4x400-meter anchor and 800-meter champion Dobbs said, “Winning a high-caliber meet like this, especially over the fourth-ranked team in the country, we are definitely showing potential to shock the nation and earn a spot on the podium in March.”

Next up for the steamrolling Maroons is the Windy City Invitational, held here in Chicago. The meet begins at 11:30 a.m. at Henry Crown Field House.