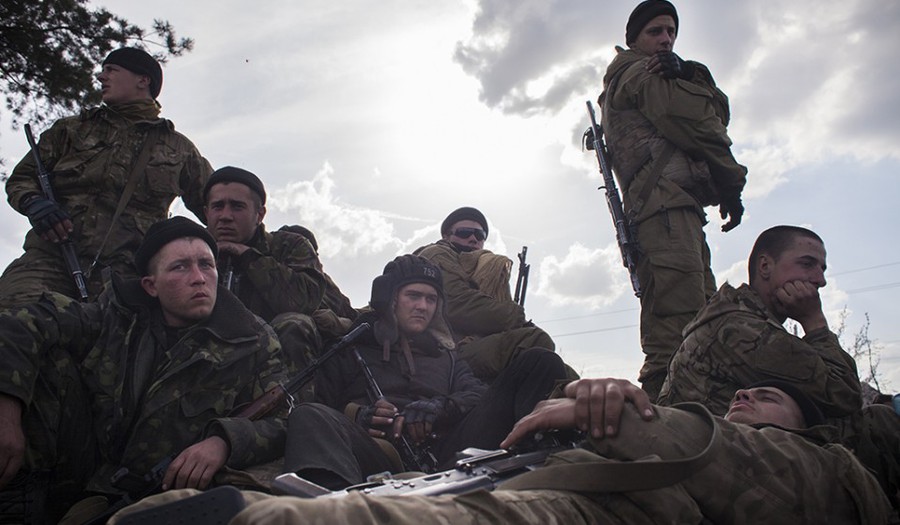 In early 2014, thousands of protesters converged on Kiev, the capital of Ukraine. They demanded the removal of President Victor Yanukovych and the cessation of his policies that sought to strengthen the former Soviet satellite’s ties to Russia. Although there existed widespread popular support for Ukrainian economic liberalization through agreements made between Ukraine and the European Union, Yanukovych’s presidency was a stark reminder of the Soviet occupation and Ukraine’s inescapable economic reliance on its Russian neighbor.

Documentary photographer Wil Sands, co-founder of the Barcelona-based Fractures Photo Collective, was in Ukraine as the protests—known as the Euromaidan—reached their chaotic, violent climax in central Kiev, during which a pro-Russian countermovement transformed eastern Ukraine into the site of a separatist insurgency. Speaking in the International House Assembly Hall on February 10 in advance of the opening of his exhibit, Waiting for Mother Russia – In Two Acts, Sands stressed the intricacies of the Ukrainian conflicts—nuance that he feels is neglected by a media eager to resurrect the Cold War narrative.

Beginning his presentation with sweeping photographs of the huge crowds in Kiev’s Independence Square, Sands described the idealism and fervor with which Ukrainians flocked toward the center of the revolution. According to Sands, the Independence Square protesters saw themselves as the revolutionary successors of the Orange Revolution protesters of 2004, who demonstrated against governmental corruption and electoral fraud. Sands also discussed the unlikely confederation of right-wing Ukrainian nationalists, trade unionists, pensioners, and disillusioned youths that formed the core of the Euromaidan movement.

“I couldn’t help but think of the historic Paris Commune,” Sands said as he described watching right-wing nationalists chopping firewood with anti-fascist punks in Independence Square.

Although some of Sands’ photographs of the Kiev demonstrations were stunningly visceral—like a picture of an older man lighting a Molotov cocktail to throw at state police, in front of a wall of flames—his most evocative portraits were those taken in war-torn eastern Ukraine. Coal miners in Donetsk loading the bodies of three of their coworkers into a truck after a mining accident; displaced elderly women picking up their weekly rations at a gaily decorated circus tent; a World War II veteran dressed in his Red Army uniform adorned with war medals at a pro-Russian rally—these are the scenes that made eastern Ukraine “the most visually stimulating place” that Sands has photographed.

To demonstrate the brutality of the situation in the East, Sands showed a photograph of the body of a slain fighter in Mariupol, describing how passersby lifted the sheet covering him in order to spit in his face. To acknowledge the Russian separatists claim that the Ukrainian government was planning a genocide of ethnic Russians in the East, Sands presented a picture of two pro-Ukrainian fascists, their faces shrouded in darkness, giving an impromptu Nazi salute to his camera.

Though he tried not to overshadow his human subjects with eastern Ukraine’s complicated geopolitics, Sands acknowledged that his collection was inextricably linked to the political and ethnic intricacies that continue to shape conflict. Nonetheless, Sands remained politically neutral, portraying both those rejecting Russian interference in Ukrainian affairs and ethnic Russians in eastern Ukraine who legitimately fear for their safety.

“It’s an incredibly complicated war, and I think that it’s going to go on for much longer,” Sands concluded. “There is no simplistic, sort of reductionist analysis…that is going to be able to resolve this. In terms of my own personal perspective…in order to reach a lasting peace, Ukraine is going to have to give up something.”

Just what that something may be, however, remains to be seen as fighting continues in Donetsk and as the fate of Ukraine, forever in Russia’s shadow, remains unclear.

Waiting for Mother Russia – In Two Acts will be on display at the ART WORKS Studio at 625 North Kingsbury Street through March 26.