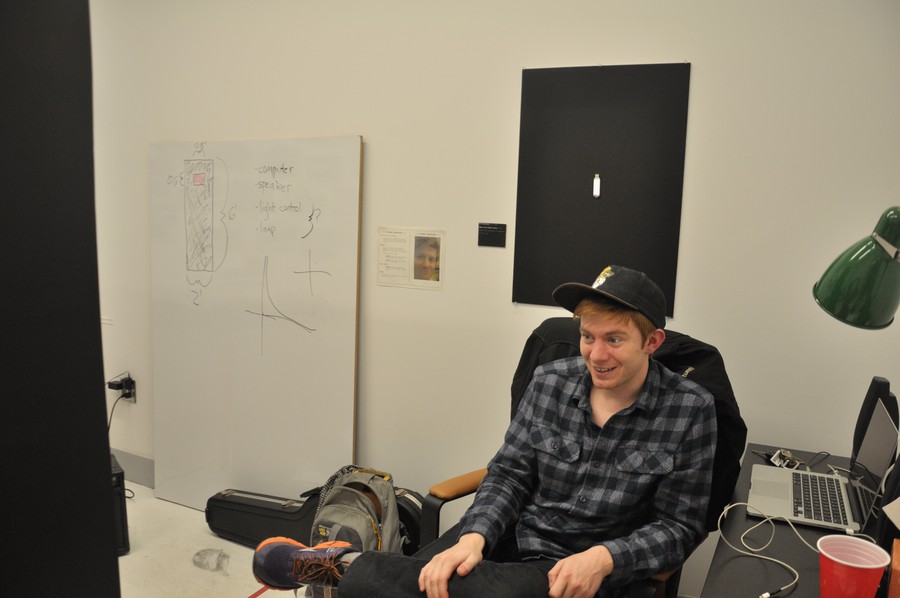 Looking at the artwork of New Hampshire native Benjamin Nicholson, which focuses on the intricacies of contemporary communications technologies, you would never guess that Nicholson grew up on a small-town farm with dial-up internet and modem problems. But being separated from his friends by miles of rolling fields and pastures drove him toward online forms of socialization.

Now a first-year graduate student in the Department of Visual Arts’ Master of Fine Arts (DOVA M.F.A.) program, Nicholson first became interested in digitally-mediated communication when he began to create “weird mixed-media things” in seventh grade. He later saw his own computer-oriented thought process reflected in the coding he did throughout high school. For Nicholson, art became a way to explore technologically-mediated relationships. He makes enigmatic art that ranges from unnerving to humorous, seeking to create pieces that evoke conflicted feelings. Some of his titles include, “CONTROL ROOM,” “black pixel,” “Glitch,” and “Mona Lisa Flash Drive.”

Because his artistic genre isn’t necessarily a popular or a common one, it was initially hard for Nicholson to find an arts program that was a good fit. Until, of course, he stumbled upon the DOVA M.F.A. program here at UChicago, which boasts an eclectic collection of artists with different backgrounds and interests. The only digital media artist in the program, Nicholson is constantly surrounded by people and art that he had no exposure to previously.

“It is frustrating at times to not be immersed in a discourse focused purely on digital art, or have another coder who I can bro down with,” Nicholson said. “But I am thankful for being able to gain feedback from people with experience in different disciplines and certain kinds of critical theory that I was never aware of before.”

Through his interactions with artists, he has learned that sometimes it’s better to make a physical object rather than present an idea on a screen, as Nicholson often does. As he continues to grow as an artist and create pieces that reveal how people use (or misuse) digital media, information technology systems, and software applications, Nicholson is looking toward future audiences. But with such a narrow concentration, Nicholson finds it hard to find a platform for his work, namely galleries or museums willing to display it. However, he hopes to continue searching for his niche.

Nicholson’s advice for aspiring artists? Try things that may not work out. Be mentally prepared for both positive and critical feedback from others. Relish the great field of study and work that is art. Form good relationships with the mass of great people in this field.

“Aspiring artists should never give up hope because, unlike for other careers, there is no coherent economic model. The success of one artist does not necessarily mean the demise of another. If you’re going to be in this field, love art and other people who make it,” Nicholson said.

However, if Nicholson were to pick up another job to sustain him while pursuing his art interests, he wouldn’t entirely mind becoming a teacher. In fact, he’d love it.

Ben’s future teaching aspirations reflect his deep-rooted interest in linguistic relationships between people—although this time on a more personal level. He considers it an engaging intellectual exercise to try and crack the communication code between himself and another person. Unsurprisingly, he’d like to teach something related to digital arts.

More surprising is the fact that Nicholson currently serves as the Interim Coordinator and Documentarian of The Cult of asdf. Do you ever just get overwhelmed while on the computer and asdfjkhkjfhsd? Well, Nicholson does too, as do the followers of this curious cult. “Asdf” is believed to be a cypher for all possible messages. Did you expect any less from a man exploring digital communication through art? Nicholson will surely continue finding different ways to explore his interests—if not through the origination of thought-provoking artwork, then through the organization of obscure cults. All hail asdf.

If you want to learn more about Nicholson, his work, or asdf, go to: http://www.brnart.com.