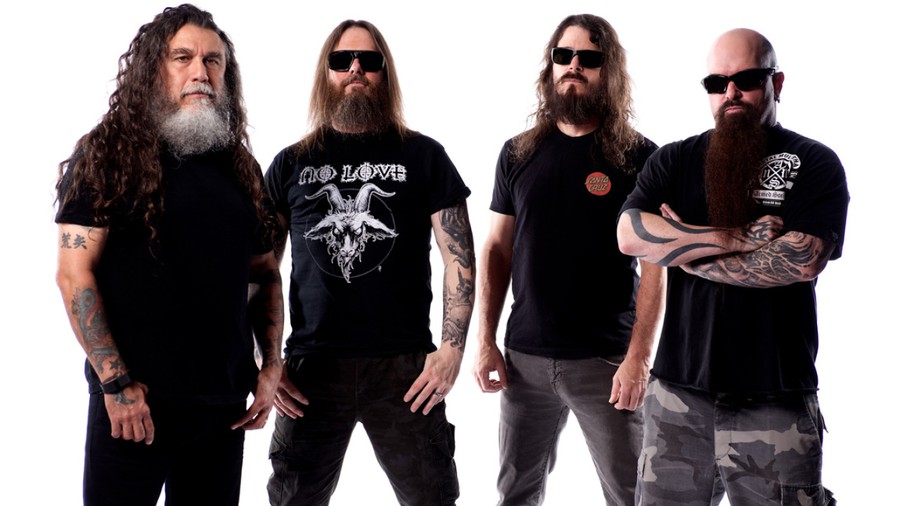 Though Tom Araya (far left) and Kerry King (far right) are Slayer's only remaining original members, they can still hold their own alongside newcomers Gary Holt and Paul Bostaph.

For old-school thrash fans, there was no metal tour as eagerly awaited this year as the billing of Slayer, Testament, and Carcass.  Throughout the late ’80s and early ’90s, these three bands paved the way for the contemporary metal scene.  Carcass led the development of the grindcore and melodic death genres, Testament spearheaded the second wave of thrash, and Slayer practically birthed extreme metal with their 1986 album Reign in Blood.  The momentous line-up called for a two-date stop at the Riviera Theatre to satiate fans.

At 7:30 p.m., Carcass took the stage and proved that the wild success of their 2013 reunion album Surgical Steel was no fluke. For 30 minutes, they riveted an enthusiastic crowd with classics such as “Corporal Jigsore Quandary” and “Heartwork.” The Steel numbers mixed in (“The Granulating Dark Satanic Mills,” “Captive Bolt Pistol”) were greeted just as ecstatically by fans. Guitarist Bill Steer pounded the audience with his multi-faceted guitar work—he performed both straight-up death metal and more harmonious songs—while front-man Jeff Walker’s guttural singing menaced his gory yet insightful lyrics.

In fact, my only complaint was that Carcass only had a half-hour set; they easily stole the show. I could have listened to the band play their entire back catalog for the rest of the night without losing any excitement for Slayer.

About 20 minutes after Carcass left the stage, Testament came on, opening with “D.N.R.” from 1999’s The Gathering. Testament, currently in the midst of writing their eleventh album, demonstrated the prowess of Bay Area thrash with songs like “Disciples of the Watch” and their ode to moshing, “Into the Pit.”

Singer Chuck Billy’s low register added thunder to the Riviera while the rest of the band slew their instruments.  Unfortunately, lead guitarist Alex Skolnick wasn’t in attendance due to scheduling conflicts; subbing in for him was ex-Megadeth and King Diamond axeman Glen Drover.  Drover did an admirable job on stage, but I missed Skolnick’s melodious soloing, Testament’s greatest strength.

Although Slayer is one of my favorite bands, I found last year’s Repentless disappointing—it lacked the originality and breadth of their ’80s output. This, coupled with the death of guitarist Jeff Hanneman, who wrote a majority of the band’s best songs, and the departure of Dave Lombardo, the lord of double bass drumming, made me more hesitant to see Slayer.

But the fact is that there’s no such thing as a bad Slayer show—when the band hit the stage, the fans went insane.  Slayer truly delivered, playing classics like “Mandatory Suicide,” “War Ensemble,” and “Die by the Sword,” although many members of the audience used the five songs from Repentless as time to refill their beers. To be fair, this is a problem most veteran bands face, but both Carcass and Testament have given fans new material as strong as their classic works.  Next to Carcass’s Surgical Steel or Testament’s 2012 release, Dark Roots of the Earth, Repentless pales vastly in comparison. The other two bands’ consistent setlists made Slayer appear uneven.

Yet despite the general indifference towards the Repentless material, the crowd went berserk for Slayer’s older material.  Few bands, if any, have fans as passionate as Slayer’s: that much was clear from the chants of “God hates us all!” from “Disciple” or the ape-shit atmosphere conjured by the opening notes of “Raining Blood.” Kerry King and Gary Holt (who has filled Hanneman’s place since 2011) ripped through the theater with beefy guitar solos, and while Paul Bostaph isn’t as showy with the drums as Lombardo, it’s tough to deny his technical ability. Though front-man Tom Araya can no longer headbang the way he did during Slayer’s prime, he is as formidable as ever onstage: his barking voice and blood-curdling lyrics can still spook the most relaxed of listeners.

Unlike peers like Metallica and Megadeth, Slayer still knows how to put on a hell of a show, even without half of their classic line-up.  With help from Carcass and Testament, Slayer proved that the spirit of heavy metal is as alive as it ever was.