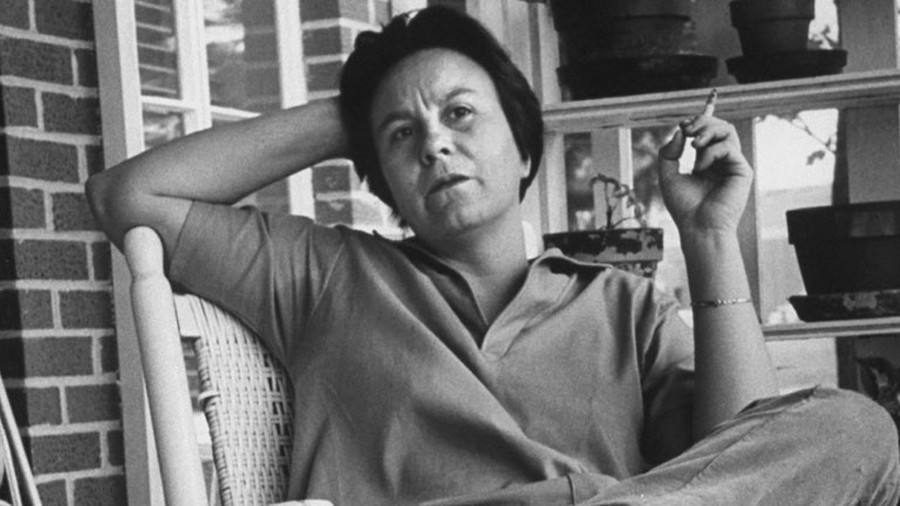 Harper Lee while visiting Monroeville, Alabama, her hometown and the setting which inspired Mockingbird's Maycomb.

Like almost everyone else, I read To Kill A Mockingbird in the course of my grade school education. Many of us wrote papers or crafted projects on this book, exploring its themes on Jim Crow, law, racism, judgment, and honesty. To Kill A Mockingbird became a favorite book of mine, much like it became the favorite of many modern readers. Scout, Jem, Boo, and Atticus became comrades in the course of the book each time I read it.

Unlike most everyone else, however, I share two names and a similar heritage with Harper Lee. Her first name, Nelle, is one of her grandmother’s names spelled backwards. My middle name is Ellen, which originates from one of my grandmothers. Ms. Lee’s middle name and pen name, Harper, became my first name because my mom thought it was pretty.

I, like her, grew up in a small town in the South. The nosy, neighbor-y, rocking-chair-iced-tea-front-porch nature of Monroeville, AL echoes in my touristy, friendly little train town in Kentucky. I’d been compared to her my entire life, so when I finally got to read her book for the first time in sixth grade, I searched for any connection that I could find. I remember thinking after a particularly tough day in English class, “If Harper Lee can write well, so can you.”

I thought of our identities as intertwined, using her as motivation to show that not only could I write, but I could do it as a strong woman. Lee became an independent, strong Southern woman to me. I didn’t care if that’s what she was or wasn’t. She represented a dissenting opinion against a wave of irrationality—a woman that, while making my name one of notoriety, lived in recluse and wore her reclusiveness proudly. Her voice rang loudly with the power of her words, not with the volume at which she said them. Who am I to not be awed by such a simple, striking presence?

I know that many of you reading this might not feel the same. Many of the classmates I asked about Lee said they didn’t have much of an opinion on her because they didn’t know much about her. While in agreement that she was a great author, most were confused when I asked their thoughts on her as a person. Take a look around at most of the news articles on her and you’ll find that most of them do not have matching opinions on her either. It seems as though most people don’t know what to make of her. Was she fun and feisty? Was she quiet and contemplative? Did she have a secret craving for chocolate-covered bacon?

While we could speculate all day on what Lee put in her morning coffee, let’s instead bring this remembrance to a close. Some people see her reclusiveness and lack of books as bad and selfish on her part. Some probably don’t have an opinion on the topic. I choose to see her privacy not only as a fantastic buffer but also as an escape for the imagination. Too often the private lives of authors can affect how we review or interpret a book. In keeping to herself, Lee allowed me to connect with her on my level exactly when I needed to.

As Lee wrote, “You never really understand a person until you consider things from his point of view...Until you climb inside of his skin and walk around in it.”

I couldn’t climb inside Lee’s skin because she didn’t lay it out for anyone. Because of that, my view of her probably isn’t the most truthful. But by not giving us her skin she made us weave our own perspectives into the book and her story as a replacement. In creating a memory of her, we strengthen her importance to us because we can more closely see ourselves in her and her characters. By existing solely in our minds and hearts instead of in the flesh, Lee made us think about, discuss, and interpret her writings and her memory so much, much more.  —Harper Graf

Harper Lee, Champion for the Unseen

Scout: Atticus, he was real nice.

Atticus: Most people are, Scout, when you finally see them.

—Scout and Atticus on Boo Radley

To Kill a Mockingbird was the first book my father read when he arrived in the United States from Jamaica in 1980. He’s probably read the book a hundred times since then, and he read it to me and made me watch the movie before I was assigned to read it in middle school. I’ll admit that I did not appreciate this masterpiece until I finished high school.

After learning of Harper Lee’s death, I revisited this quote in my own copy of the book. Looking back, I think my dad identified with Boo Radley the most. He attended a predominantly white high school in the suburbs of Chicago, where he immediately felt isolated and judged despite his quiet nature and deep intelligence. For the first time in his life, he realized how unintentionally threatening he could seem to people. The jolly Jamaican with a lanky frame soon found himself the victim of countless racial slurs and fistfights. Very quickly, he learned what it’s like to be a man of color in America, and he didn’t know if he could fight it any longer.

So, for a while, my father hid in his room and wrote letters to my mother, telling her of his experiences. He cut classes, thinking that it didn’t make sense to go to school only to be judged, assaulted, or killed. He isolated himself, like Boo. And he’d read To Kill a Mockingbird again, wondering if there were any other Boos and maybe one other Atticus out there. Still, he stayed in America and brought my mother to the States after they were married.

“The opportunities here are countless,” he once wrote, “but there’s a system to be fought.”

I think he used Lee’s book as a parenting manual, especially when I started high school. There, we realized the different underlying racist, classist, and sexist tensions that a woman like me could face. My few friends could not shield me from pointed questions about my family, about my “racially ambiguous appearance” as someone with Indian, Cuban, and Chinese ancestry, about many of my classmates’ purposeful segregation. I got tired of it and became a recluse in the basement at home, crying and doing homework. My dad saw it all, knowing that I too had become Boo Radley.

Before starting college, unknown territory to everyone in my family, my father offered some advice. “Yes, there are people who will look at you and instantly want to tear apart every inch of your innocence before they know your name,” he said. “But most people are nice. You just have to look for it. See the good in them, and they will see that you are good, too.”  —Cairo Lewis