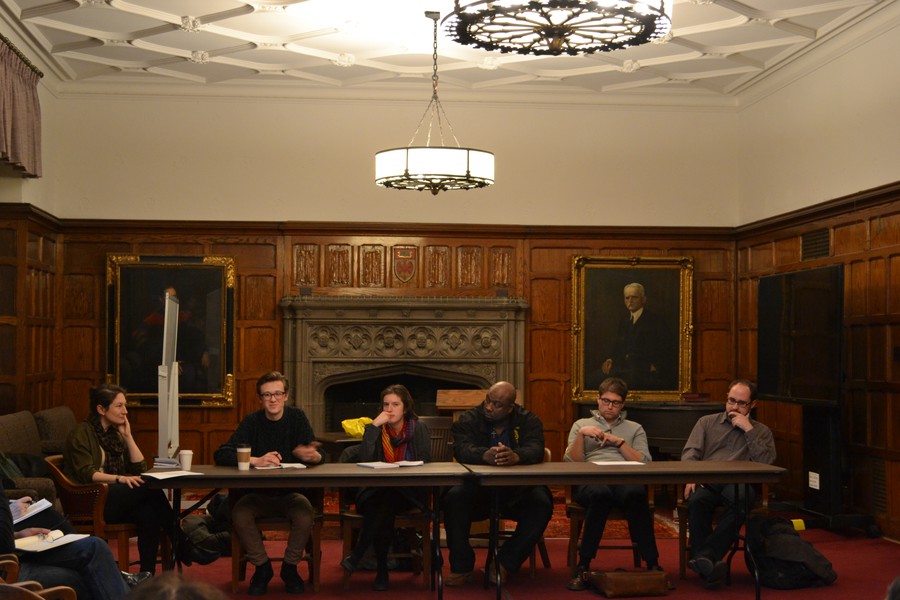 The panel, which included members of the University’s American Association of University Professors (AAUP) advocacy chapter, Graduate Students United (GSU), Trauma Care Coalition, Faculty Forward, Teamsters Local 743, and Fair Budget UChicago, was the second event in the AAUP’s Democratizing the University series, which began in the fall. Approximately 25 people attended the event, the majority of whom were graduate students or professors at the University.

The panelists briefly introduced themselves and the recent achievements that their groups have accomplished through organizing efforts. They also shared their reasons for joining their respective organizations, and why they believe efforts like theirs are essential in improving campus life.

Third-year Natalie Naculich, representative for the Trauma Center Coalition, talked about the importance of organizing on campus and in the community.

“I think victories like [the trauma center] are really important for campus, and especially undergrads...for kind of realizing the power of organizing...so we’ve really been thinking how we can like make sure people know that [the trauma center] is a victory that came from organizing,” Naculich said.

Some graduate students in attendance expressed frustration at the lack of coordination between organizing efforts on campus, as well as the lack of open support from campus organizations for one another.

In an attempt to begin resolving these issues, panelists asked audience members to share their vision of democratization at the University. Several audience members suggested creating a resource for students and faculty with information on the achievements and goals of various organizing efforts on campus.

AAUP President and Divinity School professor Willemien Otten discussed the importance of developing these kinds of organized groups on campus and of coordinating efforts between campus organizations.

“What I’m seeing is sort of a theme of how to sort of consolidate all these initiatives somehow and sort of integrate them better...I also don’t want to lose sight of our purpose of giving some form of support—moral support or other support—to you guys, you know, Faculty Forward, Harper-Schmidt, at the bargaining table, and GSU as their initiative is getting underway,” Otten said.

Panelists and audience members also involved in organizing efforts explained the strength that coordinated campus organizing could bring to each movement.

“We’re all here because we’re interested in democratizing the University, and one of the major obstacles to that is the perception that our interests are not aligned, right, that’s one of the main themes of anti-unionization of the graduate student level, that it pits students against professors, when in fact I think nothing could be further from the truth,” GSU member Madeleine Elfenbein said.

As the panel concluded, the panelists passed around a sign-up sheet to those in attendance to start a coordinated effort between those interested in continuing efforts to democratize the University. Many of those who attended also expressed the desire to hold additional panels in the future.