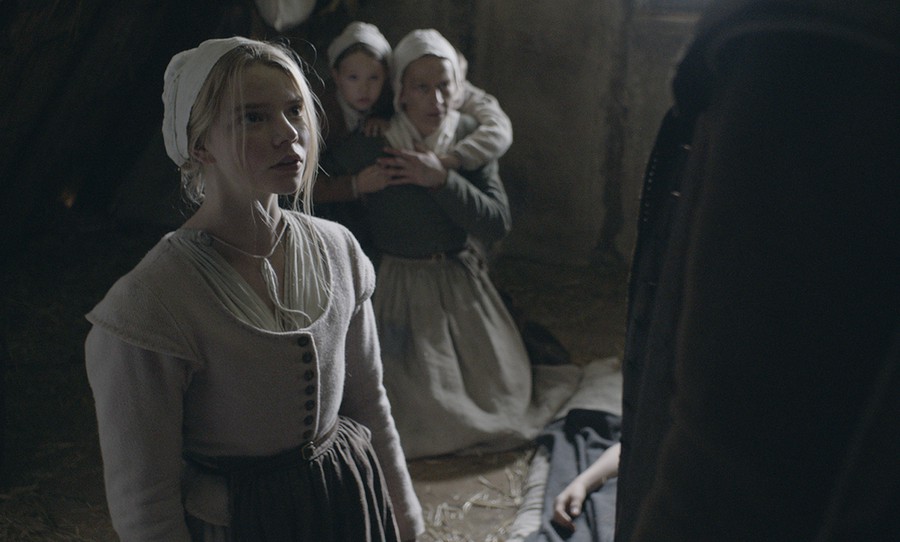 Horror films often exploit some subconscious, societal fear, like the way zombies are said to embody our anxiety about over-population. The Witch, American director Robert Eggers’s ambitious debut feature that garnered awards at the 2015 Sundance Film Festival, returns to a looming unknown, one older than human history: the wilderness.

This is where the the family at the center of The Witch lives: Banished from their colonial New England village for some unspecified heresy, they set up a farm in a clearing surrounded on all sides by the woods. Their gravel-voiced patriarch promises, “We will conquer this wilderness,” but things start to go wrong immediately. The family’s infant is spirited into the forest by a red-cloaked figure, crops fail, and children act strangely. Suspicions that members of the family have dealt with the Devil drive wedges between them. Eldest daughter Thomasin emerges as a protagonist, trying to maintain sanity even as her blossoming sexuality stokes her parents’ distrust.

There’s a refreshing simplicity to the movie’s embrace of the fantastic: witches want unbaptized babies, Satan wants your soul…and that’s about it. But this isn’t to say the movie is dumb. Eggers trades in heady concepts about the relationship between the individual and the collective, the collective and the wilderness, and sex and society.

Thomasin’s story in particular turns The Witch into a striking commentary about gender politics. The movie’s witches aren’t only witches; they’re women who live as outsiders for their “deviant” (read: unsubmissive) sexuality. For a strong-willed woman in a Puritan society, witchcraft looks like the better option.

The tension between simple text and rich subtext is mediated by Eggers’s capable directorial talent. Using only natural light, Eggers makes interior scenes look as menacing and unearthly as Goya’s black paintings, and he directs the tensest exorcism scene since, well, The Exorcist. There aren’t too many big scare moments in The Witch, but there’s plenty of atmosphere—Eggers has discovered the uncanny results of children talking in elaborate, Elizabethan English and uses it to great effect. Taken all together, The Witch is a careful and creepy look into the heart of America’s fundamental anxieties.

In Conversation with Director Robert Eggers

Chicago Maroon: Did you have a particular horror touchstone you drew from in making The Witch?

Robert Eggers: I tried really hard, when constructing the story, to really stick to the source material, fairy and folk tales, and the historical accounts of witchcraft as much as possible. But, sort of embarrassingly, the film reeks of The Shining—though I don’t think it would be as successful if it didn’t. It’s one of the few horror movies that I really love. In my early-mid 20s I spent a lot of time watching it and dissecting it and figuring out what makes it tick, so it was bound to show up.

CM: You have twins in there…

RE: Well that’s just random. I have twin brothers significantly younger than me who creeped me out as a child. I had nightmares that I accidentally killed them and all this stuff, so that’s why there’s twins [in the movie]. But that’s just surface stuff. [It’s] a kind of cabin fever story, sure. But I think that’s what I was looking for in The Shining, trying to discover what was so effective—that sustained feeling of dread. I think Kubrick, in his genius, was clever because he dispenses with any visual horror atmosphere. He’s taking advantage of what is clunky and artificial about cinema to make something especially strange, which is definitely something I wanted to do with my film. But, y’know, do a slow dolly in on anything and people say you have good technique.

RE: Well, no. One thing is you gotta play all the characters when you’re writing. And I think “teenage girl” is probably a larger part of my personality than I’d like. I didn’t want to make the film with an agenda. I was simply trying to tell this story about this family the way they might have believed it to be realistically manifested. However, feminism just rises to the top; there’s absolutely no ignoring it. Any other reading you want to give, I think you can pick and choose—but the feminist thing, I think you can’t ignore it.

CM: As a casual observer of the movie industry, there seems to be a kind of indie horror, art horror wave. Do you think that’s a real thing and, if so, are you a part of it?

RE: Yeah, I’m happy to be a part of that. There’s this idea, “make a genre movie, make a horror movie as your first movie because even if it sucks you can sell it,” and there’s some truth in that. But I was thinking, how do I make a genre film that’s personal? If I can do that, it might actually not be shitty. I think that that’s what these other filmmakers were doing, as well. I think that’s why we’re getting these people saying, “Man, the market’s so tough. It’s not like the ’70s where The Godfather is a Hollywood movie, Serpico is a Hollywood movie. I gotta do this, I gotta do genre, and how do I make it good?”

CM: Is there a particular scene or moment that you’re proudest of?

RE: Yeah, there’s a scene where William wakes up—that’s a oner, and is just great. The problem is there’s a big shock in the scene before so no one ever sees it, but it’s my favorite moment in the film. Just in general, the two things that I am proud of: the performances overall, and—this is kind of a lame thing to be proud of—the production value, [given] how meager our budget was.