"Ma played the concerto with the extroverted passion that has become his near-trademark, though it proved to be something of a double-edged sword in his interpretation."

Discussions of musical “modernism” can be a thorny business. It is sometimes discussed as a concrete musical era, which spans from the turn of the century to roughly the interwar period, and encompasses the era’s disillusionment and chaos. But others argue that modernism is less aesthetic than it is ethos. In other words, any composer whose work heralded a clear departure from the conventions that preceded them can be considered, under this broad definition, “modern.”

The concert opened with Beethoven’s overture to August von Kotzebue’s play King Stephen, an orchestral work commissioned for the 1812 opening of the Hungarian Theatre in Pest. Though his strategic courting of aristocratic patrons gave way to works like King Stephen, the famously-headstrong Beethoven considered himself a musical revolutionary whose star would long outshine those of his royal employers—a 19th-century modernist, if you will.

But even this connection seems fraught in the context of the program. King Stephen seemed thrown in as a novelty to complement the modernity of the pieces to follow, not because of any particular programmatic merit. Though a curious appetizer, the overture was played with brilliance and tight inner cohesion by the CSO. 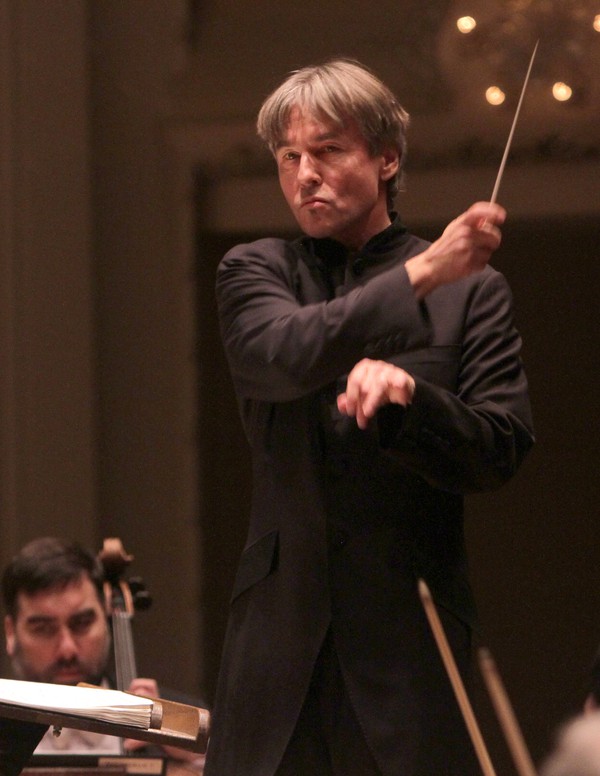 Lutosławski’s Symphony No. 3 was programmed as a part of the CSO’s retrospective season, which spotlights works premiered by the orchestra in its 125-year-long history. The CSO premiered the piece in 1983 to great acclaim; during a brief introduction before the piece, Salonen asserted that it singlehandedly “restored faith in the symphonic form.”

The palindromic piece begins as it ends, with fortissimo attacks on a unison E in the winds and percussion. What happens in between is truly symphonic in scope, in the Mahlerian sense: mercurial changes of character abound, from enigmatic to chaotic to gorgeously lush.

This technically difficult work was given a watertight performance by the CSO; in particular, the woodwinds deftly handled the birdlike solos that reemerged throughout. One might have wished for a less sluggard emergence of the penultimate section’s beautiful ascending harmonies, but on the whole, the piece was passionately played and expertly led by Salonen.

Salonen’s own Foreign Bodies followed. Though the CSO has co-commissioned and premiered the conductor-composer’s works in the past, Thursday’s concert marked the orchestra’s first performance of Salonen’s 2001 piece. “Body Movement” and “Dance,” the opening and concluding of Bodies, respectively, are egged on by propulsive grooves, backed by the power of a formidably expanded orchestra: The work is scored for quadruple woodwinds and six horns (the CSO had seven), as well as unconventional instruments like the bass and alto flutes, maracas, and electric bass.

The CSO played Salonen’s work with a rich, hefty sound, injecting the same energy into the work that Salonen did in conducting it—a refreshing and compelling first interpretation by the CSO. Percussionists Cynthia Yeh, Patricia Dash, and Vadim Karpinos deserve special commendation for traversing their section’s expanded instrumentation with finesse and flair, as do the baby-faced Civic Orchestra musicians who were sprinkled throughout the orchestra as substitutes. Most impressive were young trombonists Charles Dieterle and Prapat Prateepphleepon, who held their own alongside CSO veteran Jay Friedman.

Ma, incontestably the evening’s biggest draw, was saved for last. He joined Salonen and the CSO onstage for Shostakovich’s Cello Concerto No. 1, preceding his appearance in March 2017 with the same collaborators for the world premiere of Salonen’s Cello Concerto.

Ma played the concerto with the extroverted passion that has become his near-trademark, though it proved to be something of a double-edged sword in his interpretation. He played the concerto’s fervent outer movements so forcefully that his sound quality was occasionally compromised, and the dry acoustics of Orchestra Hall, which tend to be unforgiving to solo strings, did little to help.

However, Ma played the concerto’s more exposed, lyrical inner movements with an aching, time-stopping beauty that did much to redeem these blemishes. The third movement, essentially an extended cadenza for solo cello, represented the best of Ma’s intensely emotive style, trading kinetic power for raw honesty.

In a program that might have been a tough sell to stodgier classical music fans, the combined magnetism of Salonen and Ma drew a nearly packed house to Orchestra Hall. At the end of the day, Beethoven knows as well as Lutosławski and Shostakovich that their music waits for no man—but filling seats doesn’t hurt.