Coping With Sexual Violence Through Art 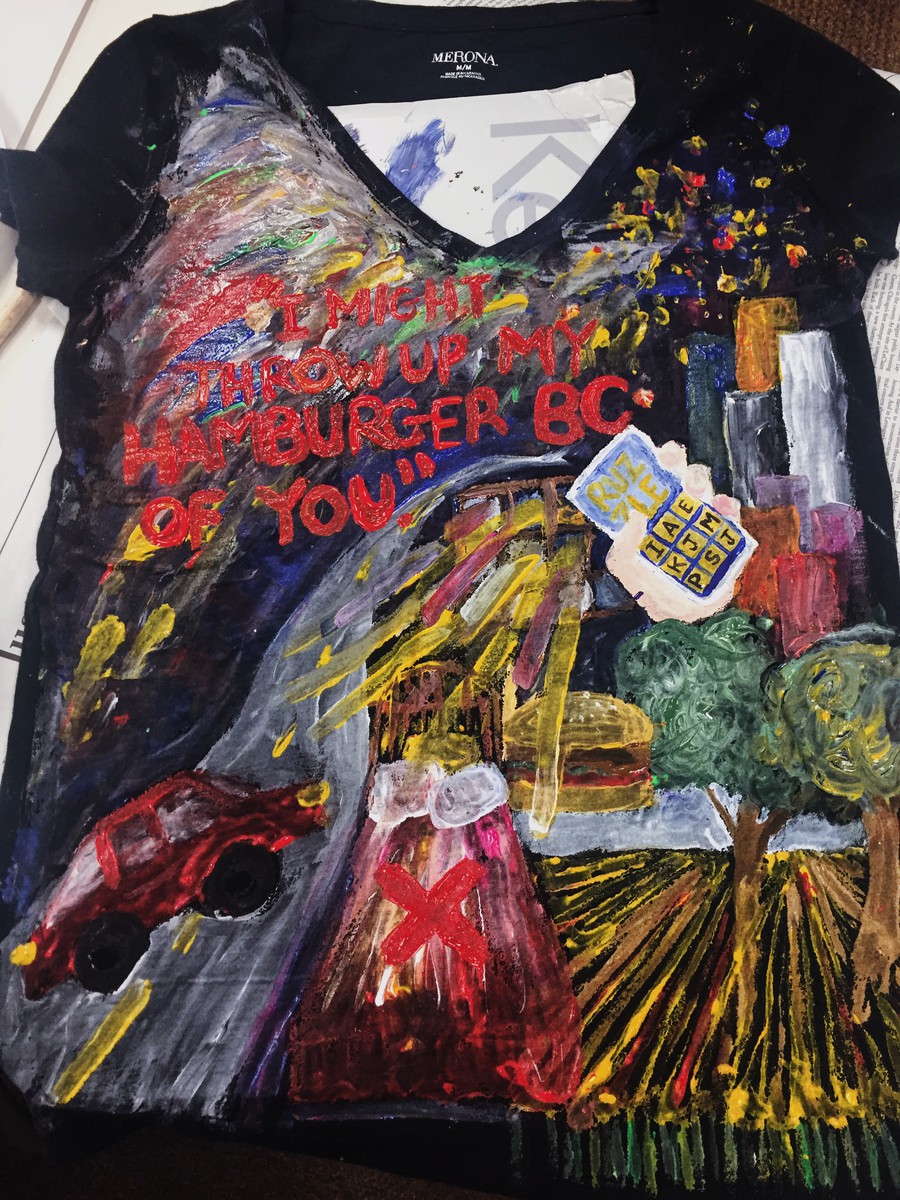 Last Tuesday was the first T-shirt-making session for this year’s Clothesline Project, set to debut in the spring.

Harper Room 140 has exactly 92 seats, stacked in rows and curved around the back of the room. During the day, light pours through windows behind them, but on the evening of January 26, the curtains were closed. The illuminated screen opposite the seats glowed even more strongly in the absence of afternoon light.

When I walked in, the seats were decently full. The room swelled with conversation as attendees served themselves the complimentary pizza and popcorn. After a few minutes, a member of the campus RSO Amnesty International stood up at the front of the room, quieted the chatter, and offered a brief introduction for their club-sponsored event. Thus began the scheduled screening of The Hunting Ground, a documentary about sexual assault on college campuses in the U.S.

The documentary opens with a series of relatable narratives: the college admissions process. One by one, young men and women face the camera to remember their admission to college as a moment of euphoria, recounting their journeys to campus, their move-in days, and the instant friendships they formed along the way. It’s all very uplifting and nostalgic. Then, one of the students finally cuts to the chase, accompanied by dramatic music: she and another friend were both sexually assaulted “before classes had even started.”

From there, the documentary becomes both disturbing and heart-wrenching as director Kirby Dick chronicles the experiences students have with sexual assaults—and identifies the measures that universities take to cover them up. In response to such administrative tactics, two female survivors take to the road, creating a network of young survivors across the country. It quickly becomes clear to them that hushed-up cases of sexual assault are endemic to universities. The message of the film is clear: sexual assault is a scarring, traumatic experience, and university actions (read: inactions) make the aftermath even more destructive.

In order for The Hunting Ground to fulfill its intent as a “call to action,” it needs to be memorable, and it is. The juxtaposition of student narrative and animated facts creates a meaningful contrast between abstract numbers and very real experiences. In a scene following a survivor interview, university logos are displayed in quick sequence on the screen, representing the colleges under Federal Investigation for violating Title IX rules for handling cases of sexual assault. The University of Chicago’s phoenixed seal flashes right in the middle.

Following the film and subsequent discussion, many viewers packed up to head home, but I, along with a few others, headed straight across the hall. Here, we addressed the significance of our time under the phoenix seal through a Clothesline Project T-shirt painting session.

The Clothesline Project by its own description is “a student-run and survivor-driven initiative that amplifies the voices of survivors of sexual violence through art installations.” These installations consist of painted T-shirts and written stories. Maybe you saw them last spring, hauntingly hanging in Hutchinson Courtyard? Through the Clothesline Project, survivors can paint one of these T-shirts to reflect on or write about their assault.

“Options for expression are important for survivors because our trauma revolves around having no option. The difficulty sometimes lies in confronting the trauma in the creation of the work, which can be really scary,” Ortiz said.

After getting the run-down, I headed to the back of the room to the piles of neatly organized T-shirts and paints to make my selections. Sitting down in front of a blank canvas is always difficult, and this was no exception. Just as was cautioned, I found it hard to decide what to include when depicting my assault; considering different artistic possibilities just made me remember certain moments all too well.

Slowly, however, as other students and I worked at these newspaper-covered tables, our own stories began to develop on the T-shirts. Some students chose to write particular phrases, while others focused on images.

It was a heavy night, but a meaningful one. I witnessed two creations identical in subject, yet opposite in methodology; while The Hunting Ground projects the ideas and stories of others through film, the Clothesline Project allowed participants to project and process their own experiences through art. As Olivia puts it, “I think both passivity and activity are important in recovering from sexual violence. You get to be validated by other stories when experiencing someone else’s creation and take charge of your own story when you create something.”

After watching The Hunting Ground, I was grateful for the opportunity to find my own empowerment through the Clothesline Project. Over the course of the evening, my shirt became encoded with small moments—different objects, scenes, and phrases from my experience were woven together in one colorful blur. Though an onlooker may not be able to make sense of the finished product, the process gave me more clarity than I’ve had in a long time.