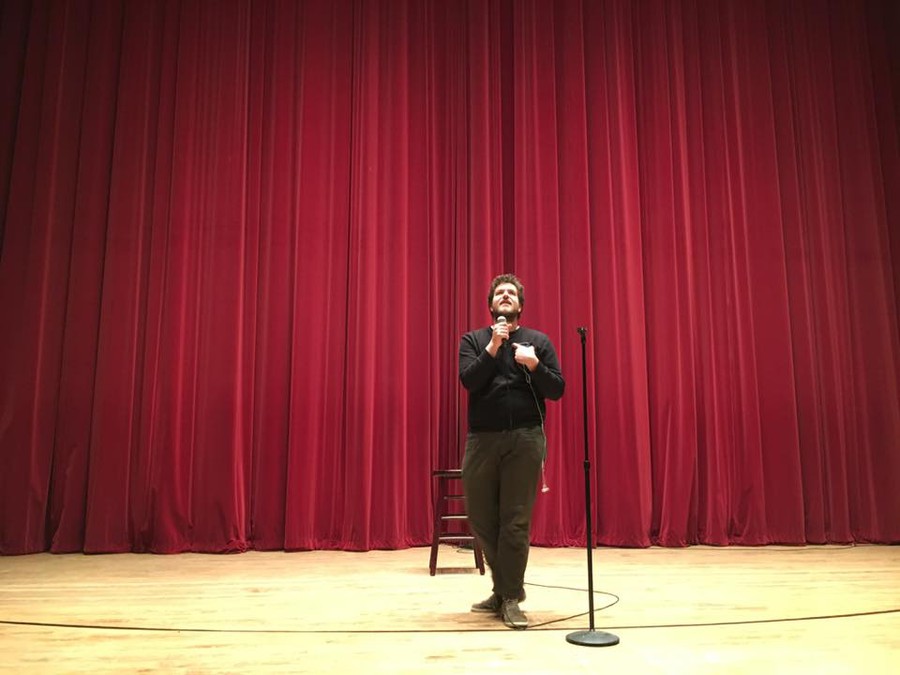 A college student, a single dad, and a middle-aged stoner walk into a comedy show—stop me if you’ve heard this one.

Moller kicked things off, beginning with a self-aware routine about doing stand-up on a big stage. Before talking about his mother’s obsession with posture and the UChicago’s undue emphasis on math, Moller shared the rules he set out for himself for the show: first of all, don’t be nervous. Compared to the years of experience Funches and Torres bring to the table, Moller was a definite newcomer to stand-up, but he managed to use his lack of experience to his advantage. Not only were his jokes about flubbing lines and not knowing what to do onstage quite funny, but he also created an endearing brand of comedy that masked any real nerves he might have been feeling.

Toward the end of his set, Moller delighted the crowd with some UChicago-specific comedy. “Clap if you’ve been to the Reg! Clap if you’re a senior! Clap if you’re in AEPi!” This last joke ended up receiving some of the biggest laughs of the evening.

Compared to the bundle of energy that Moller brought to the stage, Torres was as cool and calm as a late autumn breeze. He never rushed his stories, and his experience really shined when he interacted with the crowd (mostly to comment on how weird we all are). He was particularly merciless when making fun of homeschooled kids and improv comedians, the “homeschooled kids of the comedy world.” Of the three acts, Torres’s ended up being the least memorable, but he consistently got big laughs and warmed up the crowd for Funches’s more rambling comedic style.

When talking about the joys of being newly rich, he outlined a conversation he would have with his new neighbors who have real jobs. “I just get high on pot and mumble into a microphone. You did not realize that was a lucrative profession.” Based on how much he did mumble that evening, it follows that the first part was also true during his UChicago set.

Recreational drug use aside, Funches was always completely in control of his set, and of the crowd. A lot of his material seemed off-the-cuff because he was so natural onstage and laughed so hard at his own jokes. I’m all for professionalism, but his mental state arguably added to the relaxed atmosphere in Mandel.

This year’s show had the strongest lineup of any MAB comedy show so far. Funches was the most memorable performer and brought the biggest and most consistent laughs, but Moller and Torres held their own and worked well together. Each built on the others’ comedy and periodically referenced the previous performers during their own sets. It was a far cry from two years ago, when Chicago rapper Calez opened for Hannibal Buress (for whatever reason). Even last year—which featured two solid comedians leading up to Sasheer Zamata—was somewhat disjointed compared to this year’s group.

While this will probably be the only time we see these three performers on the same comedy slate, Moller, Torres, and Funches were a comedic force for the evening, leaving attendees with faces and chests burning.