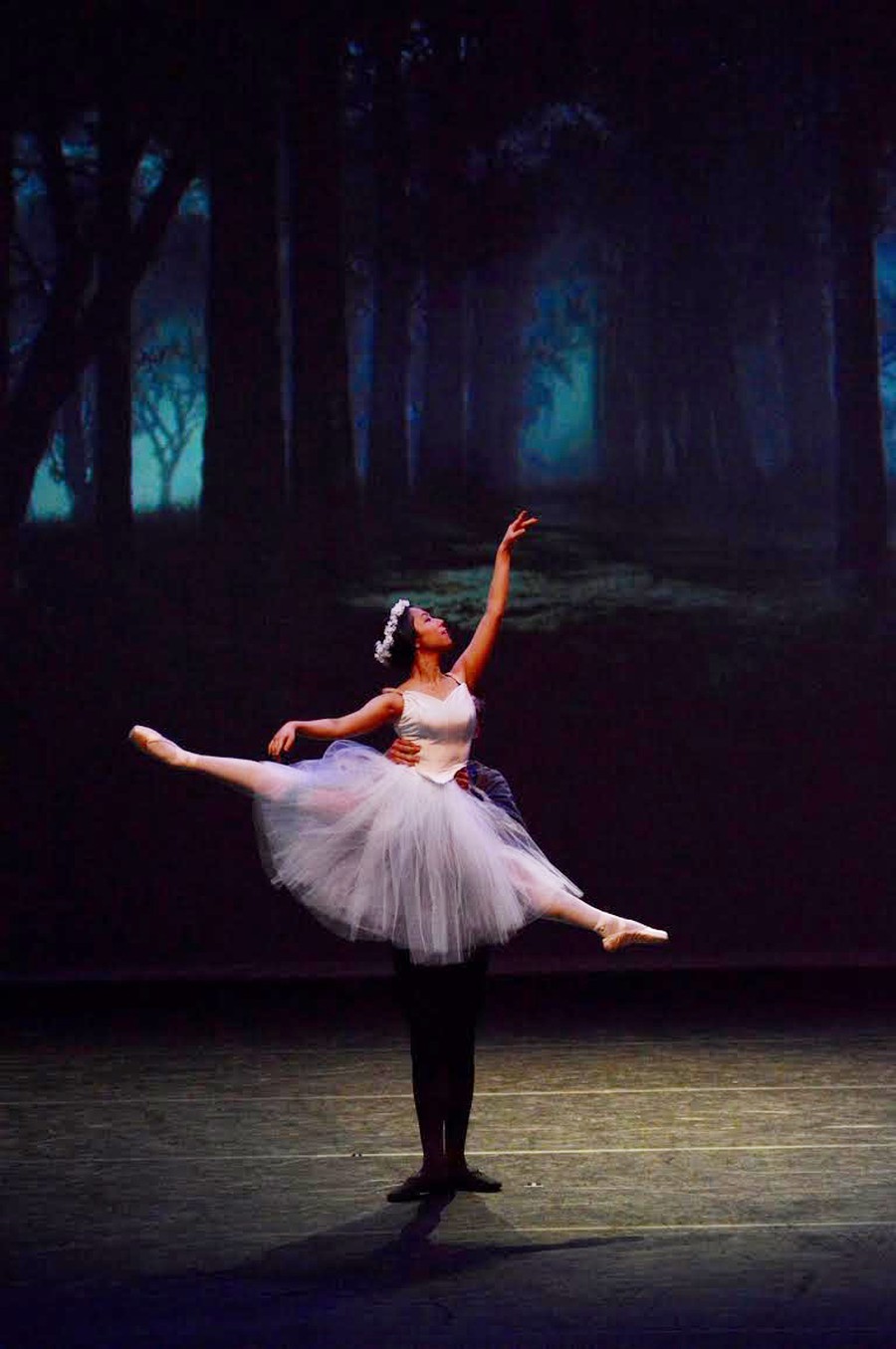 Wordless speech, timeless emotions, endless nuance: ballet is an art form like no other. Little compares to the precise yet melancholy flock of swans in Swan Lake dancing in unison to a fluttering Tchaikovsky score or the heart-wrenching tragedy of Juliet draping her limp body across Romeo’s.

UBallet—the only ballet RSO on campus—presented its winter production, Giselle, on January 30 and 31 at the Logan Center Performance Hall. The audience ranged from small children who whispered loudly as the lights dimmed to parents who quietly shushed them in anticipation of the performance.

A study in contrasts, Giselle balances a light-hearted, climactic first act with a haunting, mournful second act. Giselle is a village girl who loves to dance. Although Hilarion wishes to marry Giselle, her heart belongs to Duke Albrecht, who disguises himself as a common peasant. Hilarion is suspicious of Albrecht, so when a group of nobles, including Albrecht’s fiancé, stop by the village, Albrecht cannot deny his true identity. Giselle—despite her mother’s warnings not to exert herself due to her weak heart—dances herself to death in a fit of passion.

In the second act, Giselle joins the ranks of the Wilis—the spirits of women who have died of broken hearts that dance for eternity in the woods. As Hilarion comes to mourn Giselle, the Wilis overtake him, forcing him to dance through the night until he, too, dies of exhaustion. Albrecht also comes to visit Giselle’s grave and nearly endures the same fate, but Giselle intervenes with Myrtha, the Queen of the Wili. Although they dance through the night, Albrecht is spared as the morning sun rises.

The large cast of over 50 dancers—comprised of undergraduates, grad students, and other members of the Hyde Park community—was directed by fourth-year Emma Tehrani and artistic directors Elizabeth Smith and Chris Chen.

The group is committed to its dual mandate of both performing ballet and introducing it to first-time audiences and dancers. Thanks to a no-cut audition process, dancers come from a wide variety of backgrounds; some have never danced before while others have danced with pre-professional companies. In addition to promoting ballet within the UChicago community, UBallet offers free weekly classes from basic to advanced levels, and its shows are open to the general public.

What sets UBallet apart from many other dance groups is its inclusive and supportive atmosphere in spite of its huge membership. “The nature of UBallet is that dancers with more training and experience guide newcomers into the ballet world and help intermediate dancers improve technique and performance quality,” said Natalie Genz Jerkins (AB’ 10), who danced as a Wili and has remained involved with the company post-graduation. “Our organization would collapse under the weight of our own egos if we couldn’t channel training into education and inclusion.”

Some of the more experienced dancers also served as stagers and choreographers. The collaborative atmosphere ensured that there was “a feeling of camaraderie within the cast,” observed first-year Khephren Chambers, who made his first foray into ballet with Giselle.

The support extended beyond improving technique and practicing choreography. “People are lending each other makeup, moving set pieces, helping out with props and costumes,” said third-year Chris Chen, UBallet’s co-artistic director, in an e-mail. “The other dance groups on campus I have been a part of don’t have that level of involvement outside of the actual dancing.”

Sunday’s performance was marked by the enthusiasm of its female lead, first-year Riko Kanaida. “I found out about UBallet at UChicago [and] wrote about it in my application essay,” she wrote in an e-mail. Her coquettish playfulness brought Giselle’s youthful charm to life as she spun around the stage—a teenage girl giddy with her first love. The lifts of the pas de deux with the Duke, played by second-year Keegan Morris, were sometimes slightly unsteady but executed with flair.

Unfortunately, technical difficulties dogged the production. As the lights dimmed for intermission, the curtains would not close, and Giselle’s “dead” body was eventually dragged away by Hilarion, who was played with panache by second-year Kyle Wickham. The large ensemble cast of villagers dancing in the background crowded the bare stage, breeding blunders as a result. The mediocre lighting detracted from the sunny mood of the first act, but it was rectified in the second act when a loud fog machine set the eerie tone for the menacing Willis.

The precarious balance UBallet attempts to strike between putting on quality performances and introducing ballet to a wider audience is not unlike that of a more hesitant novice dancer, but what the production sometimes lost in the chaos on stage was counteracted by the enthusiasm and exuberance of the dancers.

UBallet will be performing Sleeping Beauty on May 21 and 22 in Mandel Hall.