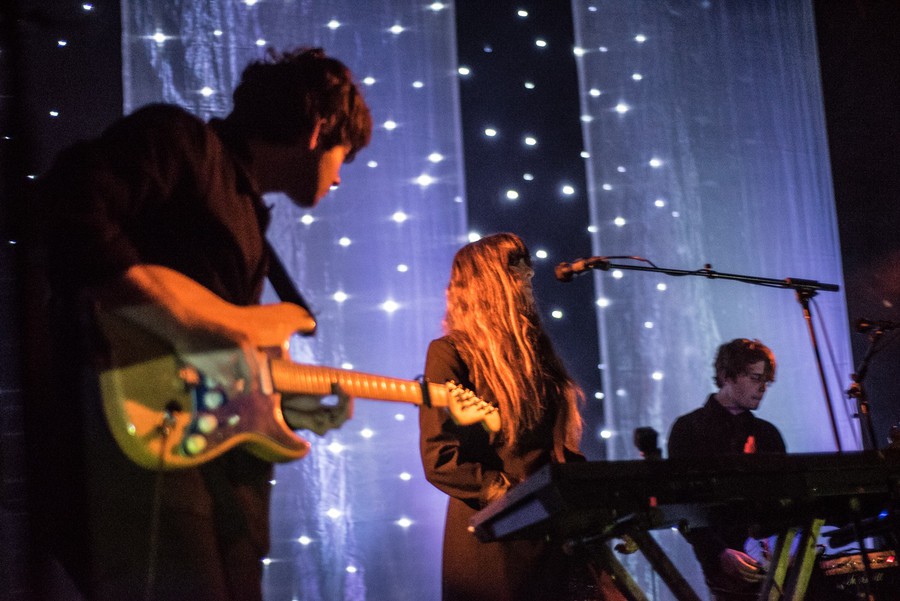 This past Tuesday, I was faced with a difficult choice: spend my night on campus, again trudging through the ice and snow, or head to the Vic Theater in Lakeview to spend the evening listening to the dreamy tunes of the Baltimore-based band, Beach House. Somehow escaping the siren call of the Reg, I chose the concert.

Outside the Vic, several signs read “Sold Out!,” fending off optimistic passersby. At 8 p.m., the opening act, Wume, walked on stage and began playing. An unusual combination of synths and drums, its music was relatively well-received. After a quick set change, Beach House emerged.

The duo, composed of vocalist/keyboardist Victoria Legrand and guitarist Alex Scally, walked on silently, covered in shadowy lighting. They were followed by Skyler Skjelset and Graham Hill on the bass and drums respectively, who are accompanying the pair on tour. Unlike most bands who launch into long introductions and banter with the audience, Beach House simply began its set.

Despite its carefree name, Beach House doesn’t release upbeat, Top 40 songs you might blast on the radio in the summer as you pack your trunk with towels and coolers of Bud Light. Characterized as a “dream pop” band, this duo is better known for its swirling textures and melancholic melodies. Its songs are dominated by breathy vocals and a blend of organ, slide guitar, synths, and drums.

Shrouded in darkness and visible only from the backlit stage, Beach House began playing. A single chord sounded, and Legrand’s haunting voice broke the stillness. In a downtempo fashion, the band played “Levitation,” a song from its new album, Depression Cherry, as the crowd stood in a daze. The lyrics fell into a repetition, reflecting the atmosphere of the show: “There’s a place I want to take you / Where the unknown will surround you.”

A beautiful balance of light and shadow, the set design could not have suited the mood of the music more perfectly. Hazy lighting bloomed behind a soft curtain adorned with delicate lights, providing a stunning backdrop for the show. The colors alternated between deep reds and bluish purples as the tone changed from song to song.

The band members swayed to the beat of the music, creating a wavy motion on stage as they played throwbacks like “10 Mile Stereo” and “Gila” (my personal favorite). Legrand stood with her hair in her face, distant and unreachable, and only occasionally spoke to the crowd, giving a quick hello and thanking the venue for hosting them.

“Myth” and “Elegy to the Void,” the final songs of its official set, blended into each other, building to a dramatic end. Legrand sang sadly, “What comes after this / Momentarily bliss / Consequence of what you do to me,” as Scally plucked the rhythmic bassline on his guitar. Skjelset and Hill kicked it up a notch, launching into the final song which built to a loud, almost cacophonous crescendo of bass and percussion. The audience exploded into thunderous applause as the band exited the stage.

For the encore, only Legrand and Scally returned. They finished with “Saltwater,” a song about unrequited love, and “Take Care,” which Legrand introduced as “another kind-of love song.” They played a wide selection of songs from various albums throughout the evening rather than focusing only on their newest albums, Depression Cherry and Thank Your Lucky Stars, which enhanced the audience’s appreciation of their performance.

One of the most striking features of the show was the inclusion of a sign language interpreter, who stood on the balcony signing rhythmically to the beat. Scally mentioned that this was the first time they’d received such a request from an audience member. I then realized that the performance, with its aesthetics and acoustic vibrations, would have been a beautiful thing to experience even without sound.

The audience left quietly, and everyone seemed to be stuck in a sort of dream, calmed by the soft synths and steady beats. And I think that’s one of the most unique features of Beach House—its ability to elicit an implacable feeling of nostalgia, one that is somehow not personal or localized, but capable of capturing a shared experience.