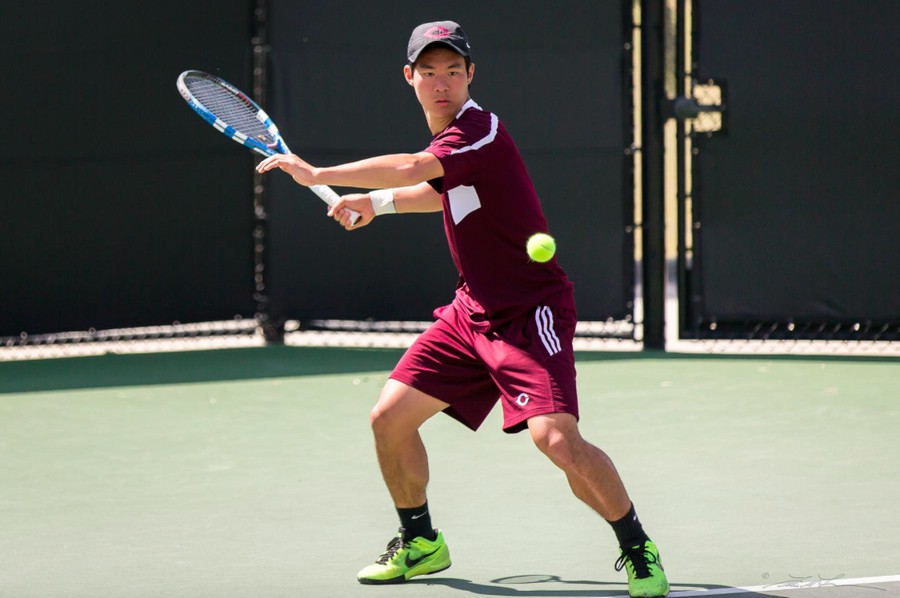 While brisk winds whirled across Hyde Park during spring break, the UChicago tennis teams were able to escape to the warmer skies of the West Coast for their annual spring break trek to Claremont, California. There, the No. 4 men faced a quartet of top teams in the nation, and were able to return to Hyde Park with a trio of wins (No. 25 Stevens, No. 30 UC Santa Cruz, No. 22 Tufts), and a lone loss against No. 2 Claremont-Mudd-Scripps. Meanwhile, the No. 15 women split a pair of matches, winning against No. 25 Whitman and losing against No. 22 Tufts.

The men’s trek began with a face-off against Stevens. Holding a 9–1 record, the Maroons entered the match as a heavy favorite against the 5–2 Ducks. The Maroons faced a formidable challenge from their New Jersey–based foes, but were able to escape with a 5–4 victory. One of the major keys to the Maroons’ victory was first-year Charlie Pei, who won at No. 2 singles by a match score of 6–4, 6–2; and at No. 2 doubles alongside second-year Peter Leung by a score of 8–3.

Following their opening victory against Stevens, the Maroons faced UC Santa Cruz and Tufts. The Maroons made quick work of these lower ranked opponents, as they defeated Santa Cruz by a score of 7–2 and Tufts by a score of 8–1. Following this trio of victories, the then No. 4 Maroons found themselves with a 12–1 record and a face-off against one of the other top teams in the nation: No. 2 Claremont-Mudd-Scripps.

Despite the momentum from their three victories, the Maroons were unable to topple the Stags as they dropped the match 7–2 and left Claremont with a 12–2 record. Against Claremont-Mudd-Scripps, the Maroons garnered their two victories in singles, as second-years David Liu and Luke Tsai both defeated their opponents in straight sets. Meanwhile, the Maroons dropped four singles matches, and were swept in the three doubles matchups.

“At the end of the day, they were simply a little bit tougher than us and won lots of close matches,” said Pei. “The loss gave us extra motivation and we look forward to the chance to play them again, hopefully in the post-season.”

On the women’s side, the team only had two matches during its time on the West Coast. However, the level of competition was just as strong as that which the men faced, as the women faced a pair of top 25–ranked opponents.

First-year Rachel Kim stressed that the team didn’t look at the rankings of the teams they played, but instead focused on their environment. “These were our first matches outdoors so that was something new we had to overcome, but we did a really good job handling these other factors,” she said.

The then No. 14 Maroons entered their first match against No. 25 Whitman with a 4–2 record and a three-match winning streak. Showing that they are a force to be reckoned with, the Maroons clobbered their opponents from Walla Walla, WA by a match score of 8–1. The match dropped Whitman’s record to 9–7, and the Maroons garnered their fourth straight victory, giving them a 5–2 record on the season.

On the doubles side, the Maroons won a clean sweep in the three matches, as all three pairings won by at least five games in a super set that required eight games to win. Meanwhile, the Maroons won five of the six singles matches.

Two days after their triumph against Whitman, the Maroons had a date with No. 22 Tufts, who were undefeated on the year at the time with a 2–0 record. While the South Siders were the higher ranked squad heading into the match, they encountered trouble across the board as they eventually lost to the Jumbos by a score of 8–1.

The lone victory for the Maroons came at No. 3 doubles, as the pairing of fourth-year Stephanie Lee and third-year Tiffany Chen won 8–5. While the Maroons may have lost, they put up a valiant fight against the Jumbos. In singles, first-years Kaela Bynoe and Kat Stevanovich both forced their opponents to three sets, a strong showing for a pair of rookies that will likely prove integral to the Maroons’ championship hopes later this season.

With the West Coast trip wrapped up, the Maroons have since returned to Hyde Park for spring quarter and the continuation of their outdoor season. The men’s season continues next Friday, when they will take on the No. 5 Case Western Reserve University at home. Meanwhile, the women get things started again today at the Midwest Invite, where they will have three matches through tomorrow.