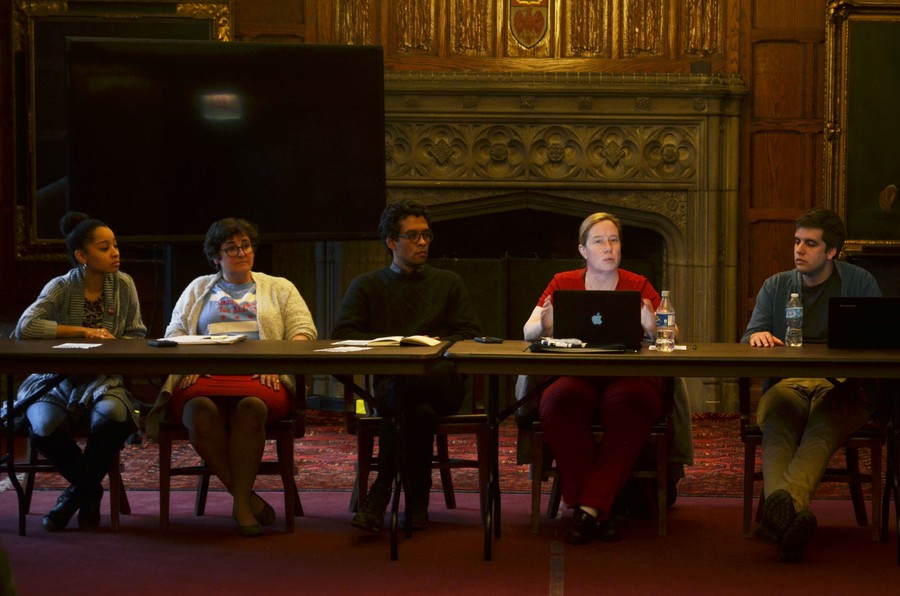 The event, which coincides with the Chicago Teachers Union’s (CTU) April 1 “Day of Action” strike, centered on a panel featuring representatives from the CTU and various supporting community organizations.

The CTU’s “Day of Action” is a citywide event involving a strike and protests by union members and supporters. “The strike is a call for increased revenue for Chicago Public Schools and its students, and a direct response to continued attacks and efforts toward union-busting,” according to a press release on the CTU’s website.

Anton Ford, a University of Chicago professor and member of the American Association of University Professors who moderated the discussion, opened by describing the events scheduled for Friday.

Gabriel Sheridan, a CTU Associate Delegate and a teacher at Ray Elementary School in Hyde Park, outlined the budget difficulties she and her colleagues face in terms of class sizes and basic building maintenance. Sheridan criticized the idea that public school teachers are overpaid, arguing that inexperienced teachers may not be prepared to handle challenging classroom environments and that attempts to replace long-time teachers are actually intended to weaken unions.

Peter Malonis with UChicago’s Graduate Students United organization highlighted the University’s role in the citywide processes behind the issues the CTU is protesting. Malonis named members of the University’s board who financially support establishment politicians including Governor Bruce Rauner and implicated the University in taking advantage of public school closings to expand its own charter school initiative.

Johnáe Strong, a member of racial equality activist organization Black Youth Project 100 and a UChicago graduate, explained that the ongoing violence against African-American and Latino Chicago residents is not merely physical, but is part of a system of economic abuse and racial prejudice driven largely by corporate and political greed.

Finally, Elizabeth Lalasz, a National Nurses United steward and a Stroger Hospital employee, discussed her experiences during and after the 2012 CTU strike. Lalasz argued that funding to Chicago Public Schools (CPS), Chicago State University, and Northeastern Illinois University has since been intentionally decreased, but that Friday’s strike offers a new opportunity for change. The discussion was then opened to members of the audience.

“I’m hoping that connections between human workers get made and that we come away from this with some sort of victory in each other, but a sense of tentative unrest that our work is not done,” Goldbaum said.

Goldbaum also suggested the possibility of future follow-up actions by the CTU. “I think that tomorrow the empowerment we’re going to have from the different working groups is going to be so awesome that we will be ready for another definitive, long-impacting action in the near future.”

As part of the protests, supporters will host a “Speak Out in the Quad” event at 2 p.m. Friday’s event is intended to allow students and UChicago staff to gather in support of the CTU’s broader efforts.