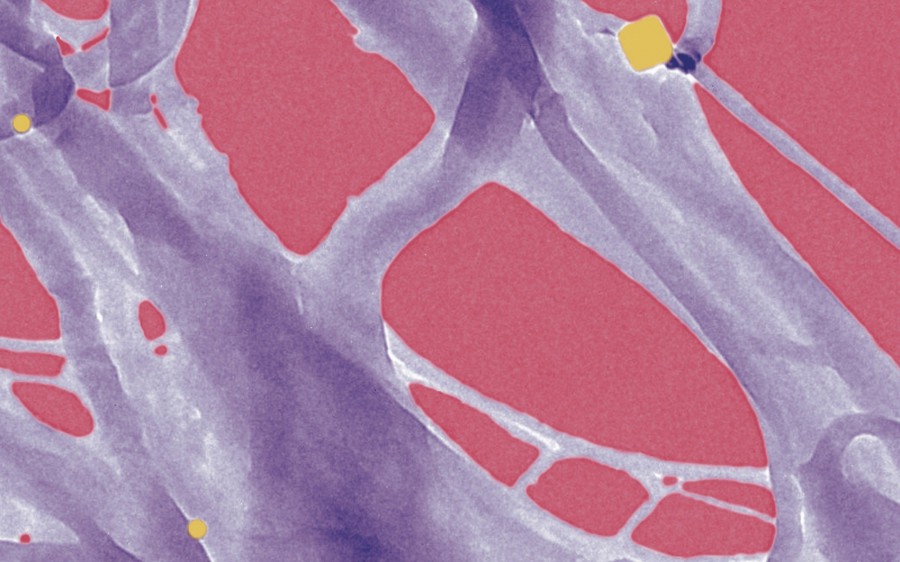 At this weekend’s Second Fridays in Pilsen, the Chicago Arts District’s galleries featured a show called The Art of Science, an artistic collaboration between scientists from the University of Chicago and Northwestern University. The University of Chicago’s Graduate Council partnered with Northwestern’s Science in Society research center to display artwork inspired by the research of—and created by—graduate students and post-docs at both schools.

Adam Brown, a Ph.D. candidate in computational neuroscience at UChicago, and Kevin Song, a Ph.D. candidate in biophysical sciences, reached out to their counterparts at Northwestern to coordinate the event. Since 2010, Science in Society has held an annual scientific images contest titled “Capturing the Beauty of Science.”

“I find that there’s a great disconnect between the scientific community and the public, and there are some scientists that have trouble explaining their work to the public without using jargon,” Song said in an e-mail. “I thought this would be a great way to reconcile the two communities.”

The gallery effectively merged scientific objectivity with artistic subjectivity. Scientists are usually trained to be objective: they go to great lengths to ensure that any claim they make is grounded in fact. However, this event gave them the opportunity to subjectively express what they feel is beautiful about their work.

“One of the reasons I chose to do my Ph.D. training in the Biron lab was the striking visual aspects of the research,” Brown said in an e-mail. “We work with a tiny nematode worm called C. elegans and almost 100 percent of what we do involves microscopes and cameras. I started making ‘art’ in the lab to share what I was seeing with my friends and family and whomever else might be interested.”

The Art of Science displayed not only research, but also the artistic influences of the scientists behind it. There were paintings, drawings, and a vast range of digital media ranging from pop art to abstract expressionism. The personality of the researcher acted as a lens for interpreting scientific research, adding a very human aspect to a field that too often gives little opportunity for personal expression.

One particularly remarkable piece of art was Practice Makes Perfect by Christine Laramy, a researcher in Northwestern’s Department of Materials Science and Engineering. The photo from her transmission electron microscope was well-balanced with a lightness reminiscent of a watercolor. The way she colored the originally black-and-white photo was bright and comforting. The title was a reference to the many weeks she spent perfecting the process of separating gold nanoparticles from soap: she captured the image after many weeks fine-tuning a new nanoparticle measurement software.

Presenting scientific research through art benefits both the art world and the scientific community. University-level research provides not only new subject matter to art, but also tools such as high-powered microscopes, through which most people would never otherwise look. Scientists receive a way of presenting their research to a wider audience with their own unique flare. But the audience benefits most of all, seeing the beauty of the physical world.