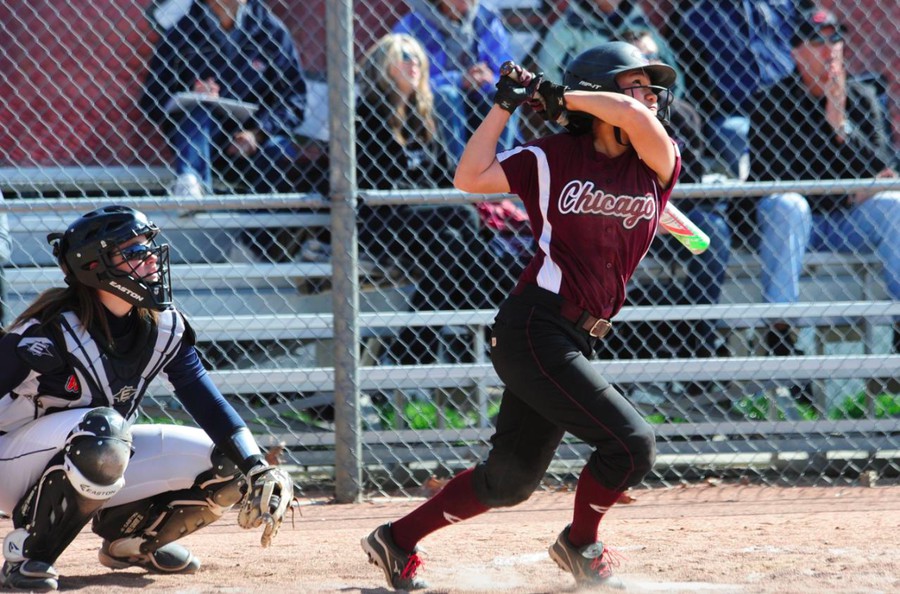 The Maroons dominated this past Monday, totaling an impressive 20 runs in their doubleheader against Mount Mary University at home.

The squad defeated the Blue Angels 8–0 in the first game and 12–2 in the second, bringing its record to a solid 13–4 on the season.

In the first game of the day, first-year Jordyne Prussak impressed on the mound, bringing her record to a perfect 6–0. While Prussak had a shaky start, with a walk and a double in the first inning, a strikeout to end the first put her back on track. From that point on, the first-year only allowed one more batter to reach base, and amassed a career-high 11 strikeouts.

On the offensive side of the plate, Prussak contributed an RBI double in the bottom of the second, to drive in a run by first-year Maeve Garvey. Fourth-year Devan Parkinson added a bunt to drive in Prussak from second, bringing the score to 3–0 in favor of the home team at the end of the second.

In the fourth, a series of defensive errors by Mount Mary handed the Maroons a total of five runs, carrying them to victory. Thanks to two strikeouts by Prussak and a play in the field, a 1–2–3 inning in the top of the fifth brought the game to an end due to the mercy rule.

Despite key errors by the Blue Angels, impressive hitting certainly propelled the Maroons to victory. Prussak went 2-for-2 from the plate, fourth-year Kristin Lopez went 2-for-3, and Parkinson went 2-for-3 with three RBI.

The Maroons’ offensive prowess carried over into the second game of the day, in which they were victorious 12–2 in another five-inning duel. Lopez kicked off the game with a double in the first inning, the first of an impressive 10 total hits in the first two trips around the batting order. At just the end of the third, the South Siders led 8–0.

On Chicago’s offensive success all season, third-year Alexa Hanelin said, “So far this season, the team has done a great job at stringing hits together to put runs on the board. When we have a base runner in scoring position, the energy rises to another level. Hits are incredibly contagious and our powerhouse offense allows our defense to exhale.”

Defensively, Chicago saw three of its pitchers take the mound in the second game. Second-year Molly Moran pitched the first two innings with five strikeouts and only one hit allowed. Hanelin threw the next two innings, and was relieved by fourth-year Jordan Poole in the fifth to close out the game.

The Maroons will play North Park on Friday, followed by North Central on Saturday.  While North Park has a record of 6–21, Chicago is not taking these looming games lightly.

“In the coming weeks, our team is playing four back-to-back doubleheaders,” Hanelin said. “The biggest challenge will be maintaining energy and stamina until the final inning of the final game. Knowing our team, and the way we pick each other up when needed, I’m confident we can pull off the wins.”

Chicago’s doubleheader against North Park will be at home on Friday. The first game will start at 3 p.m., and the second at 5 p.m. The squad will remain at home for its doubleheader against North Central on Saturday, with games at noon and 2 p.m. The UChicago Women’s Athletic Association will provide free burgers, hot dogs, and bratwursts throughout the games on Saturday.