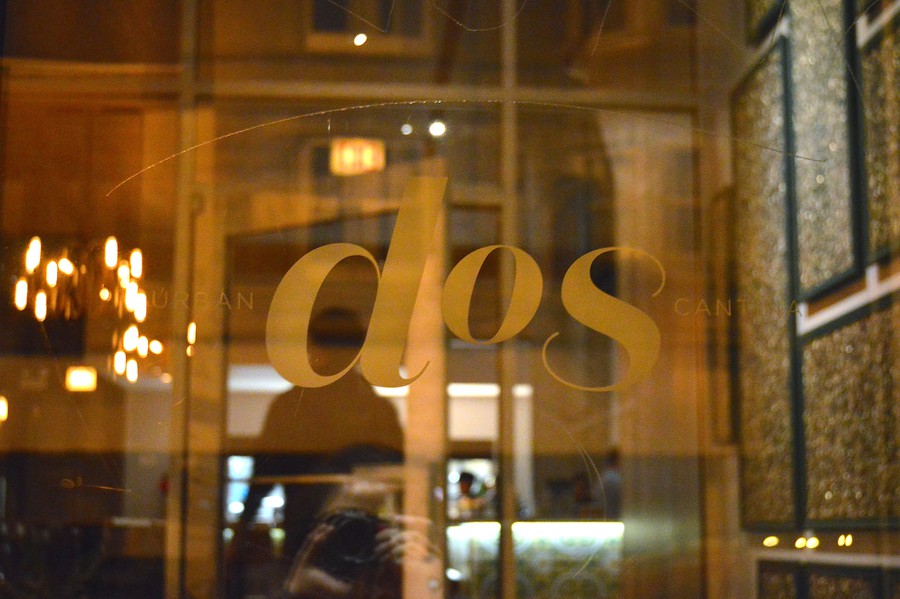 Westernization and fusion of traditional cultures are pursuits filled with the potential to fail. More often than not, we find that “Asian fusion” establishments will add soy sauce and miso to as many menu items as possible in an ill-conceived mission of cultural exchange. Customers are faced with higher price points, and sometimes neither the trend-chasers nor the traditionalists are satisfied. Many try. Few succeed.

Logan Square is known for its eccentric, hipster food culture, with South American, Mexican, and Japanese flavors scattered throughout the neighborhood. Headed by Frontera Grill alumni and couple Brian and Jennifer Enyart, Dos Urban Cantina takes the spotlight in an otherwise sparsely populated block on Armitage. Together, the couple present Mexican flavors in a modernized shared-plate format.

We were met with two warmly-lit dining areas, the first featuring a lit glass bar, tables for two, and communal setups, and the second lined with booths for larger parties. The brick walls contrasted with sleek wooden furniture, reminiscent of Mexican food’s humble, rustic nature. Come with a party of four or five to best enjoy the variety of dishes designed for sharing.

Raw Scallops ($13): While photogenic, this dish was unbalanced. Chia seeds, pickled onions, and chopped cilantro added extra texture, but the delicate scallops, furthered by the roasted sweet potato purée, were ultimately overpowered by the bright, stinging aguachile: a dressing of lime, oil, and chile peppers.

Shrimp Taquitos ($12): Pronounced, meaty shrimp met sweet pickled vegetables and subtly tart tomato broth, all of which were mellowed out with buttery avocado. This dish demonstrated control over a combination of delicate flavors. My personal favorite of the first round.

Salmon Belly Tartare ($12): The fatty salmon belly was overwhelmed by the bed of guacamole. Ponzu, a citrus-based sauce, added a nice, acidic contrast, but this dish was ultimately an unadventurous pursuit of Japanese-Mexican fusion. My personal modifications would be to use less guacamole and add hot, crisped salmon skin and fresh salmon roe in order to highlight the centerpiece of the dish.

Goat Albondigas ($13): I really looked forward to these traditional Mexican meatballs but was ultimately disappointed. The albondigas were charred well but dry. Biting into the perfectly chewy masa gnudi (ricotta cheese rolled in corn flour) salvaged this dish—a creative take on a corn-based staple of Mexican cuisine. With pungent notes of cloves, cinnamon, and peppers, the black mole could be overwhelming for some (my dining companions included). 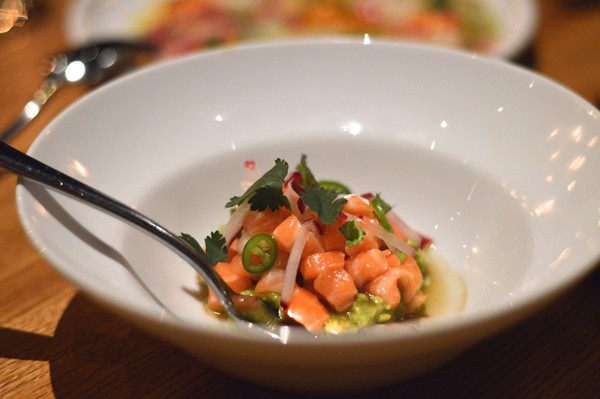 Smoked Trout ($17): Made with charred chiles, peanuts, and oil, the salsa macha was evocative of Lao Gan Ma, a Chinese chile sauce always stocked in the pantry during my childhood. Charred cauliflower and broccoli accentuated the smokiness of the falling-apart tender trout, while the butternut squash purée offered a sweet, nutty, creamy neutralizer.

Beef Pibil ($19): The cochinita pibil is a traditional Mayan cooking technique that involves taking large cuts of pork and cooking them in an underground oven with banana leaves. The result is a fork-tender, succulent roast that melts in the mouth. Unfortunately for this interpretation, most of the marbling in the beef was rendered out, leaving behind a lean, stringy, salty portion of braised beef. The collard greens were tasty and tender, but the grainy black beans only emphasized the lackluster meat.

Carnitas ($17): While not mind-blowing, Dos’s take on carnitas was evocative of the Mexican-American festivities of my early childhood and satisfied my craving for Mexican food. The tender shreds of pork and buttered potato combined with tomato broth and stewed cabbage made for a hearty mouthful that put the beef pibil to shame. The dish was nostalgic and pleasant, but could have used something crunchy.

Grilled Mushrooms ($14): While the deep, smoky umami of the shiitake and shimeji mushrooms had an affinity with the red mole, their pairing with the chestnut cornbread was one-dimensional. Not worth the price. 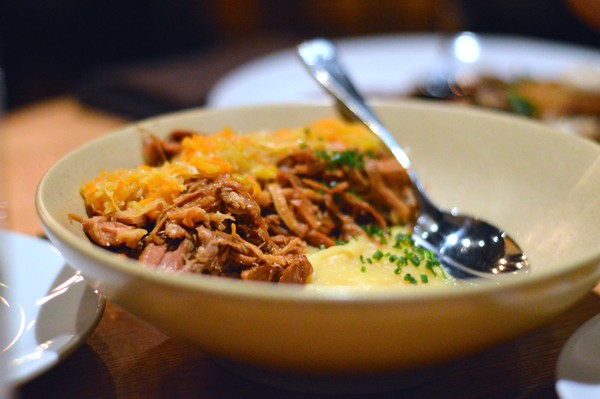 Date Pudding: Melting vanilla ice cream trickled through the crevices of this dark, decadent dessert consisting of a thickened, sticky tamarind paste atop a warm date bread pudding. This dessert will coat your mouth in a dark, viscous syrup, so I recommend washing it down with a hot latte. A unanimous favorite amongst my companions.

Sugar Pie: The dense, daunting appearance of this slice of pie was intimidating, but was actually met with a light but smoky brown sugar filling and buttery, flaky pâte brisée.

Coconut Tres Leches: This dish paled in comparison to the other desserts simply because the other three were so impressive. Crispy coconut shards and spongy, moist tres leches cake lacked dimension but certainly did the job in exhibiting the substitutability of coconut milk. 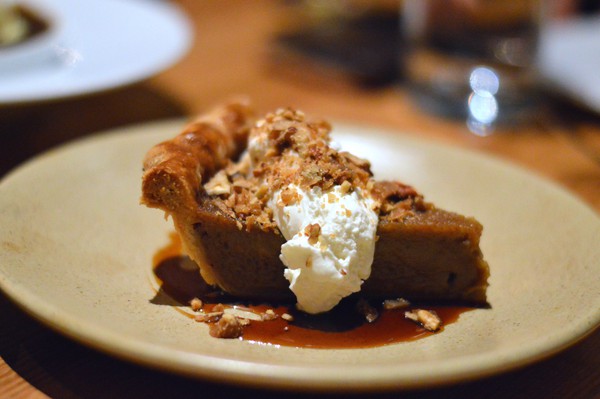 Dos is certainly not the solution to a craving for the economical fare you’ll find at the taquerías or mom-and-pop shops in Pilsen. Rather, its progress toward executing its mission is worth following—that is, if you have the palette for Mexican flavors, the extra dollar to spend, and friends to share the experience with. Dos has yet to succeed in creating a menu that both unchains it from the rich, vast Mexican tradition and exhibits consistent excellence in quality and creativity. It is trying to fill a tall order, but has a vision that merits another visit.