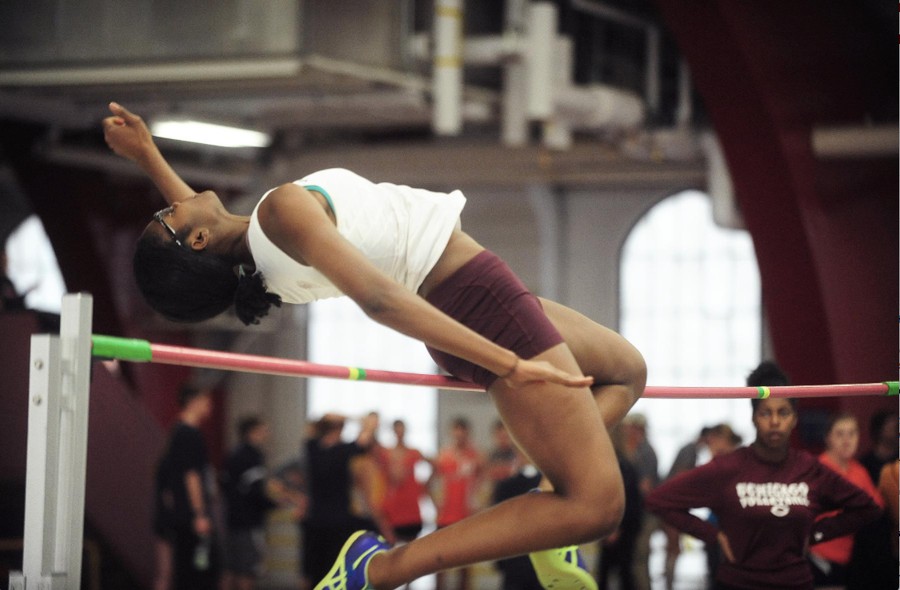 Second-year Ade Ayoola competes in a track meet on February 6, 2016.

This past Saturday, the Maroons made a relatively short trip to Wheaton College to prepare for this coming weekend’s UAA Conference Championship. While neither team won the meet (the men’s team taking fifth place and the women’s team second), the individual and relay results are deserving of optimism heading into next weekend’s event in St. Louis.

The Wheaton Twilight Meet was highlighted by its glorious conditions. Third-year runner Minnie Horvath noted that “the weather was fantastic,” calling it “probably an all-time top 10 day for weather in Chicago in general.”

Fourth-year Ryan Manzuk joked that the weather conditions played a huge role in some of his teammates’ successes. “Jatan Anand and his 115-pound frame really took advantage of some hurricane-force tailwinds to capture a couple of impressive performances,” he said. Third-year Anand took sixth and eight place in the 100 and 200-meter races, respectively.

The men’s squad had a trio of great performances in the 3-kilometer race, in which second-year Peter Kreuch, third-year Timofey Karginov, and third-year Eyal Hanfling took second, third, and fourth place, respectively. The throwers also more than held their own in contributing to the Maroons’ fifth-place finish as second-year Cristen Bublitz and third-year Joey Gary took second and fourth in the javelin toss, and third-year Andrew Maneval captured third in the shot put. Though the men had a slew of great performances, none were able to reach the top of the podium.

The women had no such problems, as the team had six different first-place finishes. Second-years Megan Verner-Crist and Cassidy McPherson took the top two spots in the 800-meter race, while second-year Aleksandra Majka and fourth-year Theo Kassebaum took first and fourth in the 100-meter hurdles, respectively. The women’s 4x400 team dominated the meet en route to the third best time in the country this year (3:49.59), and third-year relay runner Michelle Dobbs earned the top position in the individual 400-meter race with a sensational 56.93 second time, which is good for 14th best in the nation. The accolades extended to the distance runners as well, with first place finishes in both the 3k and the 5k from second-years Claire Costelloe and Khia Kurtenbach, and the second and third spots from fourth-year Brianna Hickey and third-year Minnie Horvath, respectively, in the 1500-meter race.

Horvath said of her performance, “My PR in the 1500 is exactly what I needed this past weekend to go into the steeplechase at conference with confidence.” The other runners feel similarly about their results and believe that they will be able to do some damage at the conference meet, as well.

Both squads will look to make improvements from their finishes at the UAA Championship for this year’s outdoor season. The men finished fifth while the women took second, but this meet provides an opportunity for the South Siders to close the overall track season in a better place from where they started. The two-day conference meet will begin this coming Saturday and conclude on Sunday in St. Louis at Wash U’s track and field complex.