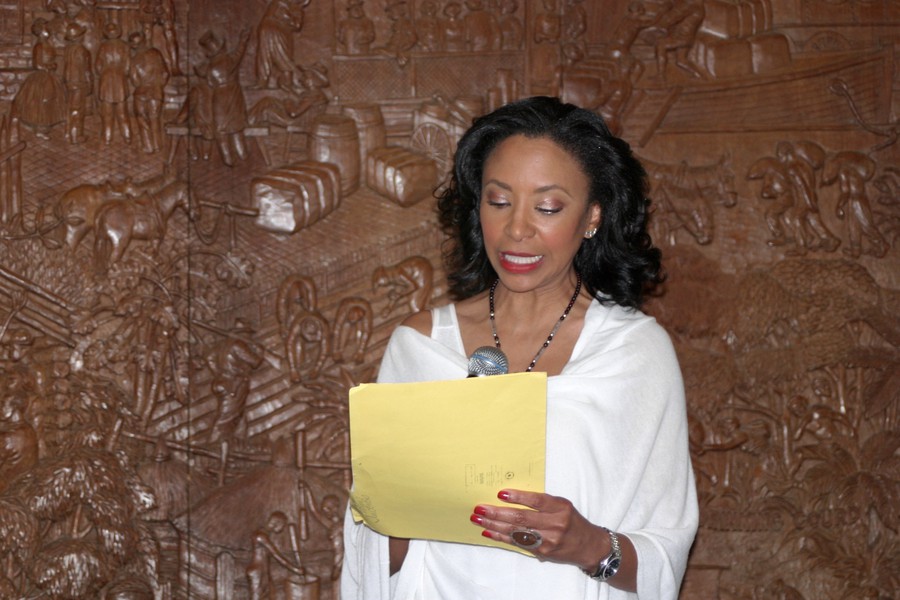 The event, titled “The Black Composer Speaks: A Roundtable Discussion on Diversity, Inclusion, and Access in Experimental New Music,” welcomed a slew of renowned musicians, composers, educators, and artivists. Although the Ames Auditorium stood virtually empty, the small but ambitious group took a diagnostic of modern music and prescribed solutions to underrepresentation and inaccessibility. 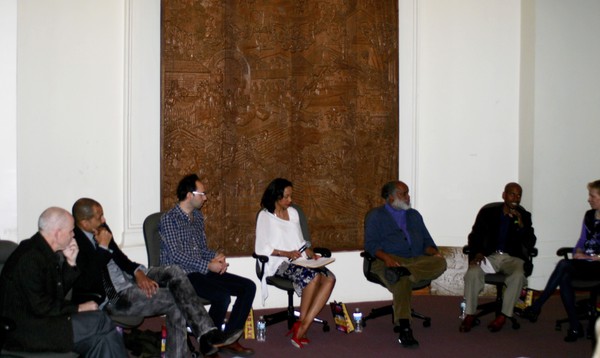 The discussion began with the basics: “This country has a conflicted relationship with contemporary culture,” Mumford said. “There’s plenty of contemporary music that a lot of orchestras completely ignore, and it’s a real shame. So I think there needs to be a higher consciousness of people on the board, of people on the artistic-administrative level, all the way down through the audience level. People need to understand that this music doesn’t exist in a vacuum—there’s context.”

Mumford furthered his discussion of the crisis of diversity by explaining exactly what he meant by “context”: “If people come to the orchestra and see people that look like them—either in or at the orchestra—I can assure you they will come. I had the opportunity to conduct the Cleveland Orchestra on Martin Luther King’s birthday, and that’s a very particular context. The audience was packed with people of color. They don’t always come back to other concerts. Funny thing about that; if there was serious, conscious, mindful effort about that programming concept, then that could be addressed in a major way,” Mumford said.

El’zabar lent a bit of background to Mumford’s assertions, explaining why artists—often undervalued for their intellectual currency—lie at the mercy of administrative whims. In the past, they wielded far greater autonomy.

“Up until the 1980s, an artist could get an individual grant of up to half a million dollars either through the National Endowment for the Arts or through the National Endowment for the Humanities,” El’zabar said. “Then government felt that it had the right to the intellectual sanction of the arts. And the first way it happened was to take away the choices individual artists could make for their own projects. You had to work with a regional organization or established institution with a 501(c)(3), so artists then got censored through the institution before they even got censored by the individual boards. Today, artists themselves are completely disempowered.” 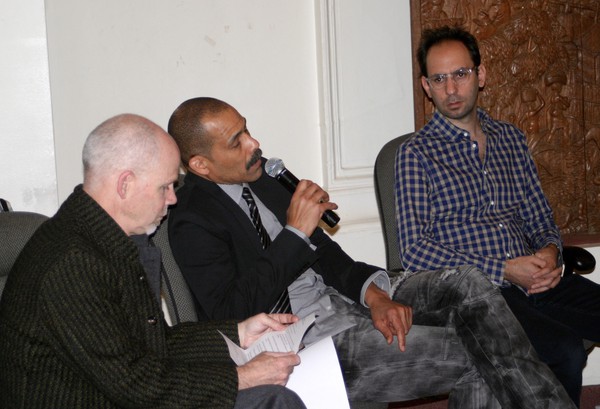 Kahil El’zabar, Artistic Director of the Chicago Academy of Music, spoke to the historical defunding of independent artists.

Beyond the artists themselves, panel members argued that school-age children are also disempowered, and robbed of the tools of music education. Many of the speakers—educators and parents as well as musicians—spoke to their classroom experiences.

“Some of these kids, they haven’t been exposed,” Quinones said. “A kid from the West Side, he’ll listen to Bach, and he’ll say ‘wow.’ Especially when they play it, they ask, ‘Can I play it again?’ There are no racial barriers. It’s just about exposure. What we’re trying to do is really set up a home base where we have all these master musicians, and make them accessible to the community in one location by giving free master classes where we invite as many people as possible.” 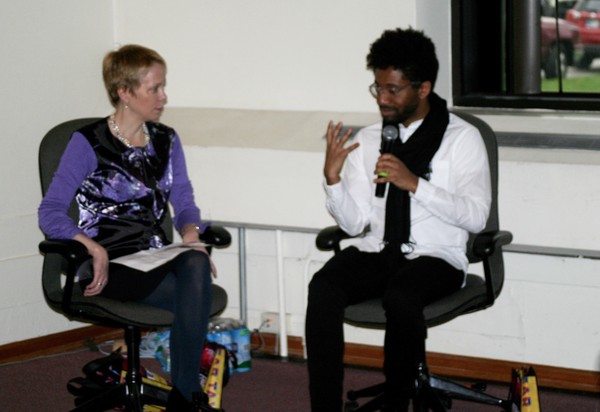 Seth Parker Woods, an internationally renowned composer and cellist, spoke to his experience working in Switzerland and identified the reasons for the primarily Western programing of the U.S.

The panelists asserted that exposure, when achieved, crosses cultural boundaries. With a medium so universal, how can we not find a way to make it more inclusive?

“We all suffered a loss last week, but we also notice that globally, everyone was touched by the transition of Prince,” Davis said. 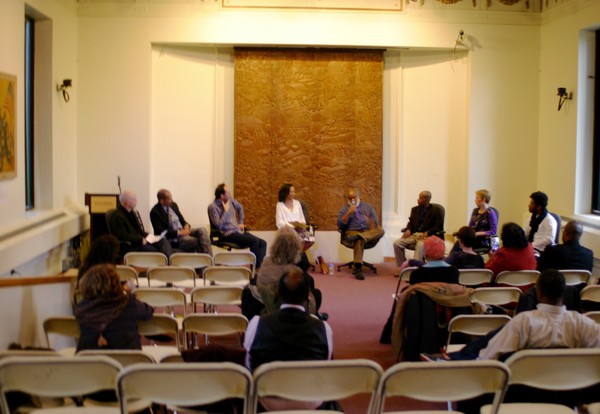 The conversation took an unexpected turn when two audience members—a former math teacher and a composer—forwarded the notion that art and music education should be incorporated into the studies of math and language, favoring STEAM over STEM. They spoke of the steady decline of formal music study, which influences what composers feel they can compose.

Rami Gabriel grew up with the tradition of classical Middle Eastern music. He plays the oud, an Iranian progenitor of the lute (and its descendant, the guitar).

“I have this issue: what do the musicians know of the tradition? What can I write that they can play without a five-hour lesson on the history and tonality? And the secondary issue is: what kind of education does the audience have? Will they hear the subtleties? And that’s the problem with new traditions. How do you make new traditions that people will hear? What can you hear if you don’t have education? Am I just talking to the three other oud players in Chicago?” Gabriel said. 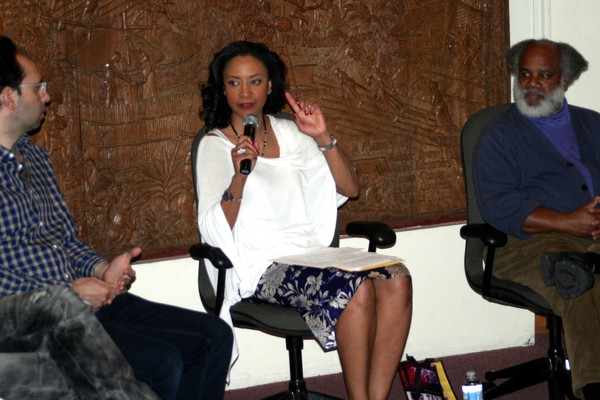 The crisis of diversity in music isn’t just about racial diversity; it extends to music genres as well. The panel suggested that a lack of music education degrades and stifles the evolution of music. To better assess the validity of that line of thought, the speakers worked backwards to track the progression of genres and identify the origin of underrepresentation.

“Every year we threw a peace concert because we couldn’t figure out what to do with experimental music during [the holidays]—because it’s so much about tradition,” Burns began. “And yet when we look at music, whether it’s jazz, classical, or 20th-century, it is a constant river, evolution of style. What people seem to forget is that when the great African diaspora happened, they brought this tremendous tradition, and America has benefited from it. And that tradition is changing, from ragtime to blues to jazz, and it keeps on going. We wouldn’t have hip-hop, we wouldn’t have jazz, if it weren’t for that great diaspora. When Beethoven was writing his Fifth Symphony, after he wrote it, they wanted his next one. Because culture is about innovation. People want the next steam engine, the next fashion.”

The DuSable Museum of Art and Fulcrum Point New Music Project collaboration culminates with a 7:30 p.m. concert tomorrow night at the Promontory: PROCLAMATION! The Black Composer Speaks, featuring Kahil El’zabar and his quartet. 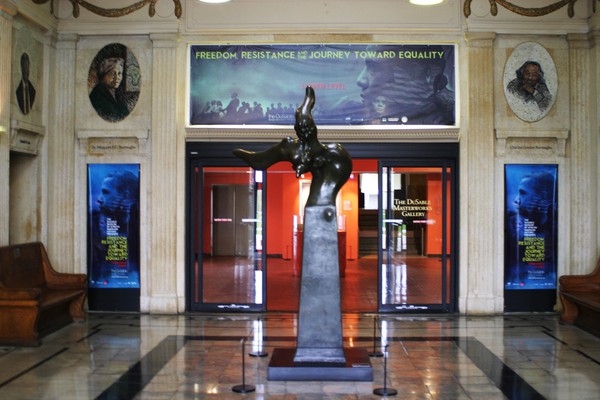 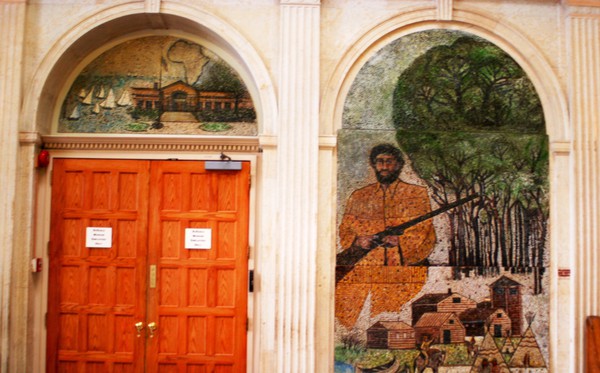 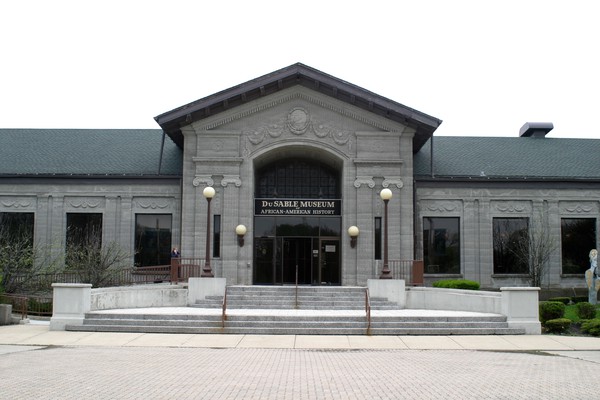