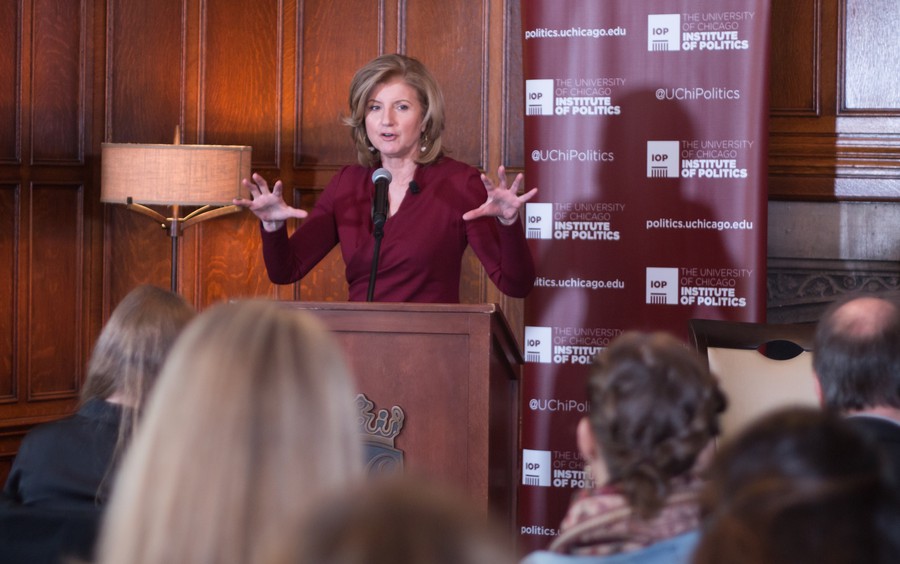 Last March, Arianna Huffington, the editor-in-chief of The Huffington Post, announced that she would visit universities across the country on a “Sleep Tour” to discuss her newest book, The Sleep Revolution, published this April. Since then, Huffington has hosted speaking events and sleep fairs at over a dozen colleges, planning to hit over 100 by the end of her tour. Bearing free pajamas and alarm clocks, Huffington hopes to transform the unhealthy culture of sleep deprivation on college campuses.

In advance of her engagement at the Quadrangle Club just yesterday, Huffington spoke with The Maroon on the phone about her book, the tour, and the feasibility of her revolutionary proposal.

CHICAGO MAROON: Can you tell me a little about the Sleep Revolution Tour thus far?

Arianna Huffington: We’ve talked to many students about how to change their habits and be happier. I have been to the University of Denver, the University of Nevada, USC, UCLA, Dominican University, Belmont, and, tomorrow, Chicago.

CM: At the University of Chicago in particular, is there anything that you’re looking forward to talking to students about?

AH: I think really two things. One, students are very data-driven, so I want to talk to them a little bit about the latest science, which is very conclusive: when we don’t get the sleep we need, every aspect of our life is affected—our immune system, decision-making, grades. Our happiness. I think once we realize that we have been living under a collective delusion, and that we are now ready to create a culture shift around sleep, it’s going to make such a difference in students’ lives. And then it becomes contagious: you see your friend getting enough sleep and doing better—being happier, less anxious or depressed—and you want more of that yourself.

CM: In your announcement of the Sleep Revolution Tour, you talked about the trifecta: between social life, grades, and sleep, you have to choose two. For students who don’t want to sacrifice for sleep, especially if it’s not feasible, what do you suggest they implement in small ways?

AH: Yes, this is the model at many colleges. But it’s not about what I suggest—I didn’t just come up with a number. This is a universal consensus. So unless you have a genetic mutation where you can function very well on four or five hours, the majority of us need seven to nine hours. Somewhere in between there.

CM: You cited some University of Chicago research in your book too, yes?

AH: Yes, and I’ll go over it tomorrow. I think it’s important to see that if students want more information, it’s right there on your doorstep. I think the key thing to recognize here is that when we get enough sleep, we do everything faster, more efficiently. We don’t get sick. You know when you’re exhausted, your immune system is distressed. And you’re more likely to catch colds, which take you out of commission.

CM: Is that something you ever experienced as a student at Cambridge?

AH: Absolutely. Yes, I’ve done everything wrong. That’s how I know, from personal experience, that I’m so much different now—when I’m actually getting enough sleep and what a difference it makes.

CM: When you were in college, do you think you would have sacrificed any significant experiences to get enough sleep?

AH: No, not at all! That’s what’s so interesting. Obviously, FOMO is a big part of a student’s life—the fear of missing out. But the truth is that when we walk through life like a zombie, we are missing out on life.

CM: When did you finally come to that realization?

AH: Well, you know, the book starts with my own wake-up call. I was completely exhausted. I collapsed and hit my head on my desk and broke my cheekbone nine years ago. I had a painful wake-up call, which is what started it.

CM: What do you plan to do next? After the Sleep Revolution Tour?

AH: We are very committed, and we want to pursue this project. We are having sleep fairs at over a hundred colleges.

CM: Do you see this sleep culture playing out at The Huffington Post or other media publications?

AH: Well, at The Huffington Post, we are very careful to encourage our reporters and our editors to get enough sleep. We have two nap rooms. When reporters and editors are off work, they are not expected to be on their phones. If there’s an emergency, we’ll call them, but they’re not expected to be on reserve. We are very cognizant of creating a culture that is supportive of people’s time to sleep and recharge.

CM: Did that become any more difficult to achieve with the institution of the 24-hour news cycle?

Huffington’s assistant, Margaux McGrath, the researcher for the Sleep Revolution and Huffington's senior editor, followed up on our conversation to flush out some details.

MM: We started with 15 schools that we wanted to bring fairs to, scaling it to 50 by sending sleep tips to another 35. And then, when Arianna actually announced the tour, we essentially doubled our exposure—from parents, students, administrators saying there’s such a problem on our campus, and we want the tools to make it better. Now we’re at over 100.

MM: Yes, on our original list! We wanted to have a pretty broad reach of schools—geographically and demographically (in terms of size, student population) and also doing our best to have as much involvement from administrations and students as possible so it would feel really organic. We were actually in contact with the University of Chicago through writing the book because of the amazing sleep center [the Sleep, Metabolism and Health Center at the University of Chicago]. It was a school we came back to again and again looking for the latest research. We worked with the health center on campus, and they have some amazing resources for students. It just looked like a great fit.

CM: When you were going through school, and now with such a busy work schedule, how do you deal with FOMO? Or not having the opportunity to do all the projects you want to do?

MM: Well, I think in college, I can certainly relate. I was a student at Georgetown, and I absolutely loved it. But certainly every campus has its own culture of the “pick two” model. In addition to classes, you’re also likely leading clubs and organizations. I found that, when I was a student, it came down to recognizing that it really isn’t a choice. There’s no, “I’ll sacrifice sleep so I can do it all” because when you’re living that model, you’re not really present in anything that you’re doing.

It’s a false dichotomy—just cut sleep and I can give my all to my academics and social life. Your grades suffer. You’re not as focused in class. Your productivity’s limited: you’re in the library, and you can’t get anything done, and that’s why. With social life, everything just feels like one more obligation—one more thing to go to. It loses the joy because you’re exhausted. Like a zombie walking around campus.

The earlier you learn that, the easier it is to implement later in life. That’s why Arianna wanted to work with college students: you build these habits in college. Then you graduate and start a demanding job. You’re trying to make new friends. You take those habits because that’s what you know, and you bring that into the “real world.” It can get really, really dangerous. It’s not sustainable.

CM: So what has the student response been like at the campuses you have already visited?

MM: It’s amazing how many students say, right off the bat, “I so need this.” That’s what I’ve heard again and again. It wasn’t even a conversation about trying to teach people that sleep is important. We’re actually getting a lot of college students recognizing its importance but not having the tools to make the changes.

The other thing we hear a lot is: roommates. Maybe you really prioritize sleep, but you have a roommate who is nocturnal—with the lamp on until the sun rises. So there’s things in your dorm room like noise and light and your roommate’s schedule. So we hear a lot of questions like, “What do I do?” or, conversely, “I’m the nocturnal one!” So how do I shift my life so that I get on a schedule that is sustainable and productive? And ultimately be happier?

CM: How do you help students make those changes? If everyone knows that they need more sleep, but they just can’t seem to do it?

MM: For us, it’s about taking micro-steps. If a student comes to us and says, “I’m nocturnal,” we’re not going to say, “Okay, tomorrow night, go to bed early, and sleep for eight hours.” The goal is not to change habits overnight. What we talk about is micro-steps, and the biggest one with college students is smartphones and laptops. For us, it glows blue light; it slows melatonin. And then there’s social media. You want to scroll and refresh, and it keeps you awake. One of the best things we can do is, before we go to sleep, to turn off our electronics. Arianna says to escort it out of your bedroom or dorm room. Do whatever you need to do. Put your phone on a shelf.

We bought Pottery Barn alarm clocks that are pretty inexpensive that students can buy. Most people say, “Well, my phone is my alarm!” You just need to take that one step. So Arianna does thirty minutes: thirty minutes before she goes to bed, her phone is off and out of the bedroom. For some people, that’s a really big jump—to go from being on your phone seconds before falling asleep to thirty minutes. So try five. Try five tonight. And let us know how it goes. If you’re drinking coffee at 6 p.m., we know you shouldn’t be drinking coffee after two o’clock, you know… shoot for four.

So proud of my friend, @ariannahuff for her incredible book, The Sleep Revolution It's beyond insightful chock full of knowledge on how sleep affects literally EVERYTHING. #SleepRevolution