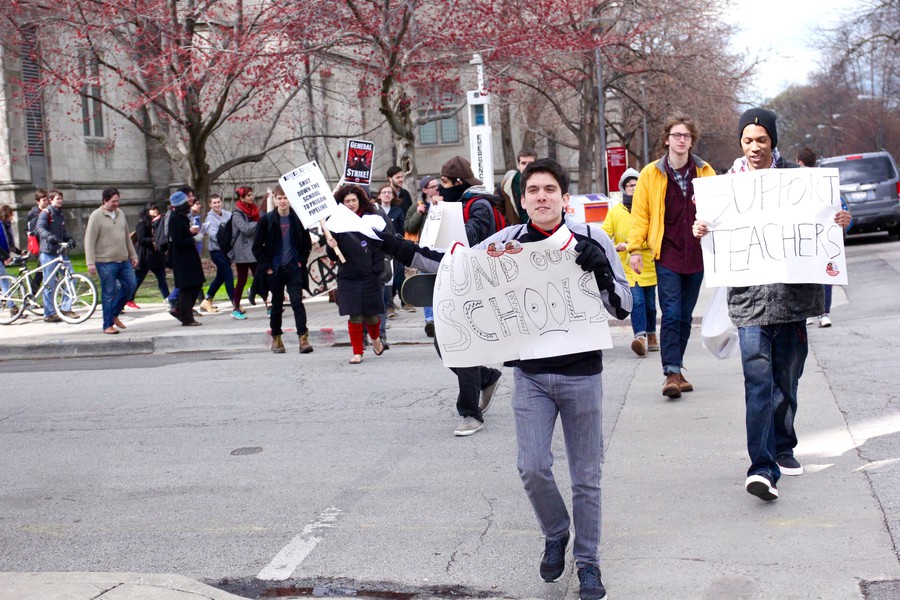 The group of protesters, made up primarily of teachers, students, and parents from Ray Elementary, demanded that Mayor Rahm Emanuel, Governor Bruce Rauner, and other area politicians increase funding to Chicago Public Schools (CPS) and address other issues such as institutional racism and tax rates for top-income citizens.

Participants in the strike held signs displaying messages such as “CPS: Broke on Purpose” and “Shut Down the School to Prison Lifeline.” They also chanted various slogans, including: “We need teachers, we need books, we need the money that Rahm [Emanuel] took.” Some protesters also made noise with tambourines and small drums, and passing cars occasionally honked repeatedly in support. After finishing the protest at Ray, the strikers moved to the nearby Bank of America on 53rd Street, which was targeted along with other banks due to the strike’s focus on “toxic swaps,” financial deals made by the city of Chicago that the CTU argues are unnecessarily draining money that could be going to CPS.

Also as part of the Day of Action, University of Chicago student groups supporting the CTU strike held a speak-out on the quad at 2 p.m. Friday. Starting at the center of the campus before marching to several other targeted locations, participants from various organizations chanted and gave speeches expressing solidarity with the CTU and its demands.

Although the protesters had brought a bullhorn, they were asked by UChicago deans-on-call, who introduced themselves before the protest and shadowed the event throughout, not to use any loudspeakers on the quad in compliance with University rules.

Gathering in a circle at the center of the quad, the protesters alternated between prearranged and on-the-spot speeches, messages of support, and chanting. Two participants held a large banner reading “Workers of the World Relax.”

“Austerity increases the cost of tuition, decreases pay for graduate workers, and overworks the people who make education possible. I think that we at this university have every reason to join the CTU, because universities are not only places of learning, they’re also workplaces,” he said.

Other speakers at the event voiced support on behalf of organizations including the Midwest Workers Association and UChicago student groups such as Campaign for Equitable Policing, The Fight for Just Food, and Fair Budget UChicago. After spending just over half an hour on the main quad, the protesters began marching around the UChicago campus, eventually finishing with a gathering in front of Saieh Hall, targeted by the protest’s organizers as a symbol of the economic systems they argued to be responsible for many of Chicago’s financial issues.

After the protest, participants marched as a group to a nearby CTA train station on their way to meet up with the rest of those involved in the CTU’s day-long strike at a rally at the Thompson Center in downtown Chicago. The rally, which was attended by thousands of people, was intended to be the central event of the strike.

The rally at the Thompson Center concluded a day of coordinated protests across the city, beginning with strikes at CPS buildings in the morning and continuing with events at universities citywide, local protests, and a press conference at noon. Protesters came together to listen to speeches by CTU President Karen Lewis, leaders of various supporting organizations, and CPS teachers, and to march along Michigan Avenue and through other prominent public spaces.