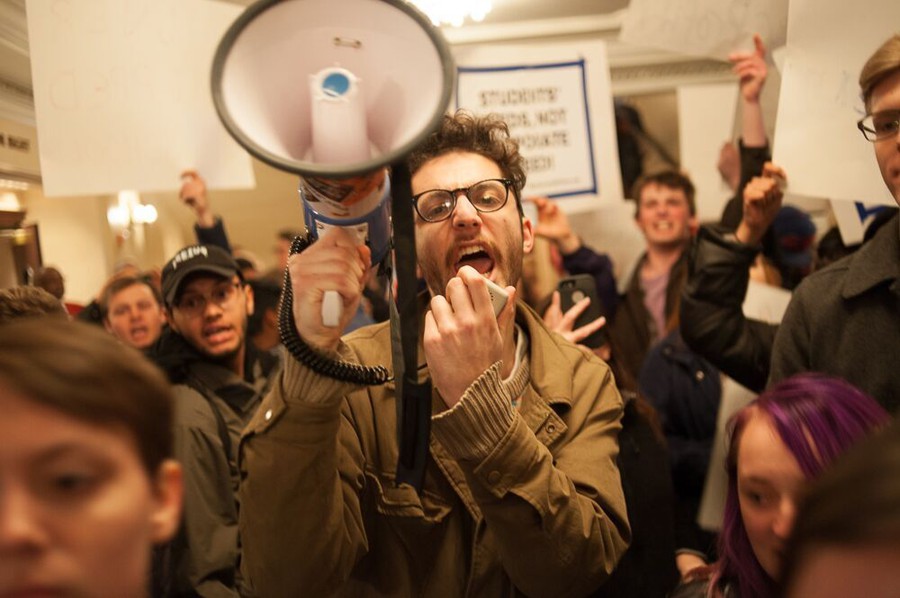 Alex Peltz, a second-year organizer with Students for Disability Justice, protests at the Chicago Symphony Orchestra.

Protesters meant to gain the attention of Sam Zell, James S. Crown, and Kenneth C. Griffin, large-scale donors to Governor Bruce Rauner’s super PAC. All three also donate to the CSO, though the protesters did not know whether or not they were at the symphony Saturday. The protesters urged Zell, Crown, and Griffin to advocate for higher education funding. They also sent a letter to the president of the CSO.

Second-year Anna Wood, an organizer with Fair Budget UChicago who participated in the protest, said that people are suffering because of the cuts. “These billionaires like Sam Zell and Ken Griffin are actively using their money to make that happen, so I don’t think they’re going to respond to polite requests for them to change their mind,” Wood said. “They’re only going to respond if we’re taking the crisis to them and things they care about, like the CSO.”

Fair Budget UChicago also hoped the protest would advance its cause of a $15 per hour minimum wage for workers on campus, as Crown and Griffin are University trustees. Fair Budget UChicago has previously targeted the University’s trustees in its campaigns by demanding the opportunity to make its case to them directly.

According to Wood, about 250 students and activists entered the CSO at 7:45 p.m. A performance of Debussy’s Gigues, Bartok’s Violin Concerto No. 2, and Rimsky-Korsakov’s Sheherezade was meant to start at 8 p.m. “We didn’t want to actually stop that performance from happening,” Wood said. “Our point was to target the donors rather than the CSO itself.” The performance went on as planned after the protest.

Most protesters concentrated themselves in the first- and second-floor lobbies, rather than in the performance hall. There, activists introduced their causes, chanted, and gave speeches. One of the speakers was Esau Chavez, a junior at Illinois Institute of Technology, who shared his experiences with higher education cuts.

Due to state budget problems, Monetary Award Program (MAP) grants that are due to 130,000 Illinois students haven’t been given out this year, according to ABC7 News. “For me in my situation, the fact that the MAP grant was cut really didn’t help at all. I had to take a semester off because of that,” Chavez said in an interview. “Luckily I was able to find an internship at a political campaign this past semester, but still I wish I would have been able to be in school and doing that.”

Five protesters who had purchased tickets to the CSO show entered the performance hall and dropped a banner from the second-floor balcony. The banner read “Sam Zell, Ken Griffin, Tell Rauner: Don’t Cut Colleges.” Security and audience members quickly moved to take the banner down, according to Wood.

IIRON Student Network has yet to receive a response from Zell, Crown, or Griffin, but the organization hasn’t given up. “If they don’t respond, this isn’t just a one-time thing,” Chavez said. “When election time comes around, we’re going to be ready to make sure our demands are met.”

The Maroon reached out to the CSO for comment but did not receive a reply before publication.