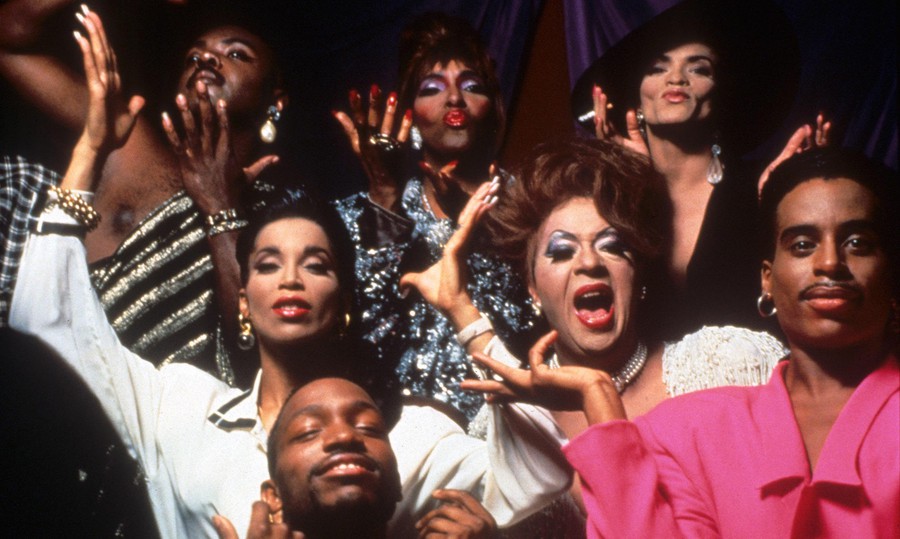 Paris is Burning offers deeply personal portraits of New York City “ball-walkers,” who have found a home in the city’s vibrant drag subculture.

So begins Jennie Livingston’s Paris is Burning, a tantalizing glimpse into New York City’s ball (drag) scene in the late ’80s. It lent mainstream America such colloquial gems as “shade,” “voguing,” and even “YAAAS”—the Internet credits that last one to some excitable twink on Vine (“YAAAS GAGA!”), but, then again, the Internet sucks at due diligence.

Yet the documentary is so much more than a mine for cultural tidbits. It boldly and thoughtfully explores the intersection of race, queerness, and inequality along the margins of white society. Ball-walkers featured in the film are predominantly working-class black and Latinx individuals: in a sense, balls represent their fantasy of belonging to a mainstream that rejects them on the basis of racial, sexual, and economic orthodoxy.

“In a ballroom, you can be anything you want,” says Dorian Corey, a legendary figure in the ball circuit, in the film. “You’re not really an executive, but you’re looking like an executive. And therefore you’re showing the straight world, ‘I can be an executive. If I had the opportunity, I could be one.’”

Most powerful are the questions Paris is Burning raises about the closet. Central to the film is the concept of “realness”—not an imitation but a becoming of what the straight world expects, what the white world enjoys. We get a taste of realness in its many forms, or categories, from haut-bourgeois (“Town and Country,” “High Fashion Eveningwear”), to pedestrian (“Schoolboy/girl”, “Banjee Boy/Girl”), to tongue-in-cheek (“Butch Queen First Time in Drags at a Ball”).

But underneath pageantry lies the paradox of conformity. “If you can pass the untrained eye—or even the trained eye—and not give away the fact that you’re gay, that’s when it’s realness,” says Corey. “It’s really a case of going back into the closet.”

Do balls ultimately celebrate or deny? The film never answers this question conclusively, but shows us a little bit of both. “It’s like crossing into the looking glass in Wonderland. You go in there and you feel 100 percent right being gay,” says David Xtravaganza, another interviewee in the film. But the realness with which ball-walkers compete suppresses their racial, sexual, or economic reality in some form. “Going to school,” the ballroom MC announces. “School. Elementary, high school, college... not here.”

Through Paris is Burning, however, we witness a ritual in which imagination triumphs over circumstance. “O-P-U-L-E-N-C-E! Opulence! You own everything!” he barks, and we believe.

It is difficult to imagine a world where realness was a method of survival, accustomed as we are by ever-greater LGBTQ+ acceptance in the U.S. (North Carolina aside) and the comforts of a liberal campus. The murder of Venus Xtravaganza, a transgender woman in her teens, stands in the film as a jarring reminder of when realness meant life or death.

At a screening of the film at Logan Center last Thursday, art critic and Ph.D. candidate Solveig Nelson touched on the more problematic aspects of Paris is Burning, its immediate and continued academic influence, and its connection to South Side history. She noted that despite the $3.8 million in profit earned by the film, participants received only $55,000 as a group; she mentioned the commercialization of “voguing” by popular culture, most notably through the song “Vogue” by Madonna; and she explored the dialogue between its characters and Chicago’s queer culture.

Most rewarding was the post-screening discussion, in which members of the local ballroom scene participated as members of the audience. I was struck by how Channyn Parker, a social worker, explained realness in terms of her own experience.

“When I look at Paris is Burning, what I really see is a crushing effect of social injustice,” she said. “Realness is basically survival. If I am seen as cisnormative, if I am seen as heteronormative, then I am better able to secure some modicum of decent opportunity that all of us should have. As a trans woman, if I am perceived to be anything other than that which I am presenting, that could essentially cost me to not make it home. Even though it’s a playful expression [of realness] that they’re doing [in the film], it’s really growing the melon and eating the rind—a painful way of making something beautiful out of something that should be guaranteed.”

Or, in terms more familiar to the average University of Chicago student: “We say ‘all the world’s a stage,’ in this case, ‘all the world’s a ballroom.’ We all know what it means to be selling our realness, to be selling our selves,” Parker said. “When you are going for your college interviews... when you are going for job interviews, you are selling your self. You are telling this judge, this interviewer, ‘I am real, I am the realest person for this job. I will get this effect [requirement] done.’ Whether you will or not, that remains to be seen. All that matters is you got through the category. You got employed.”