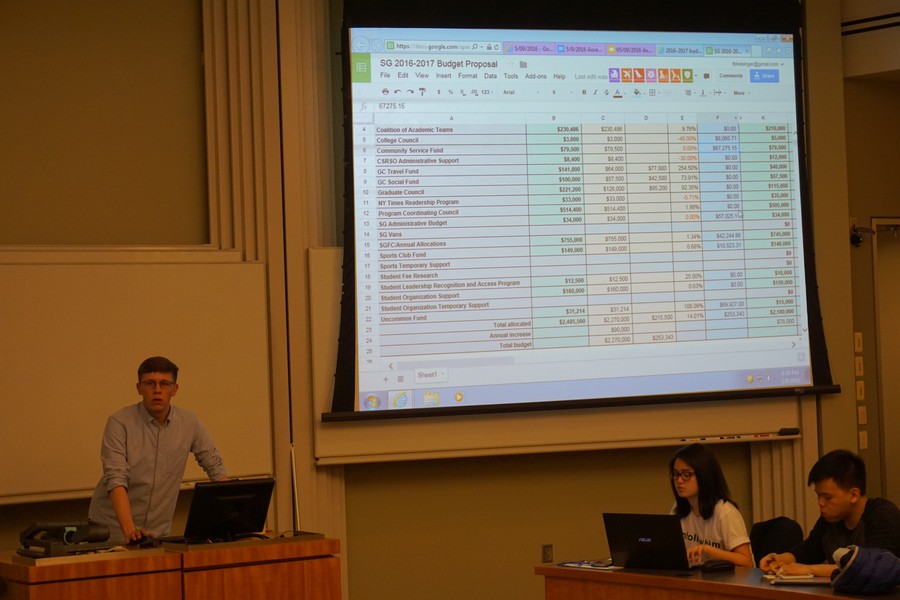 The Student Government Assembly discusses the budget on May 9.

SG President Tyler Kissinger began the meeting by stating two objectives for increasing graduate student support, one of several goals for the budget: to increase support and initiatives where there is high demand for graduate students and to increase funding for programs through GC.

Kissinger explained that the utilization of rollover funding, or unspent funds from previous years’ allocations, is the “unique” way SG plans to address budget concerns.

Undergraduate and graduate item increases were paid for in part by increases in receipts from the SLF, while rollover funding was put exclusively toward graduate increases. Kissinger told the Maroon in an email that this would make the undergraduate program increases sustainable.

“The use of rollover funds provides us with the flexibility to not substantially impact existing programming,” the memo stated.

“Given that this is a pretty substantial increase for GC, it’s nearly a 120 percent increase, I think there is a chance we may find that not all of that money will be spent. It’s a pretty large increase in a given year,” Kissinger said.

GC members voiced disagreement with Kissinger’s forecast. Haley Stinnett, chair of the GC Travel Fund, stated that her committee had used all funding for this year and had no rollover. The GC Travel fund will experience a 254.5 percent funding increase, which Stinnett affirmed would be put to use.

The Coalition of Academic Teams (CAT), which includes College Bowl, Mock Trial, Model U.N., and other competitive student organizations, requested an increase of almost ten percent to make up for cuts made in the 2015-2016 budget. In CAT’s budget request, CAT Chair Cosmo Albrecht said the cuts had caused CAT’s teams to stagnate over the course of the school year, and might restrict access for low-income students if they were not rectified. CAT received its funding request.

Annual Allocations and Student Government Finance Committee (SGFC), which funds most RSOs, and Program Coordinating Council (PCC), which funds the RSOs behind major campus events each received at least their minimum budget requests. The Uncommon Fund (UF) was given $31,214 despite asking for $45,000, and the Community Service Fund did not receive the $5,000 increase it requested.

“In short, Uncommon Fund received an increase of 108% increase in its budget–ultimately, we rely on input from the chairs of the funding committees that we oversee (UF included), but are not always able to meet the full extent of requested funds,” Kissinger told The Maroon.

“We were able to allocate the remainder of the increase to the graduate funds from our annual budget and then what was remaining was made of rollover,” Kissinger said during the meeting.

In their explanatory memo, Slate estimated that, in the 2015-2016 budget, graduate students benefitted from 29.9 percent of SG spending, but paid a substantially larger portion of the student life fee, despite increases in that year’s budget. Kissinger noted that 36.7 percent of the annual budget will be directed toward graduate programs, more than the 33.1 percent graduate students paid in.

A GC member in the back of the room responded, stating that graduate students do not feel equally represented at the University. Citing the fact that the updated budget was emailed by Slate at 2 a.m. the morning of the meeting, the GC member questioned why numbers had changed. Kissinger explained that there was a typo in the original budget that miscalculated leftover UF funding. Once it was corrected, more money could be spent on GC's pilot funding.

Kissinger said he does not think all rollover will be exhausted. With the overall increase in the annual budget and an anticipated increase in discovered efficiencies over the next year, Kissinger said that there will be no issue in continuing to fund budgets not assigned out of rollover.

Another graduate student questioned how Slate determined the budget. Kissinger explained Slate decided allocations based upon what they deemed was a reasonable buffer of funding for major funding pots. The student then asked GC Chair Casey Anthony to comment on the budget proposal.

“And I think that moving forward next year we’ll really get to look at is it necessary to fund New York Times Readership program or is that something that the library should be doing, is the Uncommon Fund the best use of resources in a student leadership program, are these things that are successful or are they not,” Anthony said.

In their memo, Slate called for an increased portion the SLF to go to the SG budget. Slate suggested that revenue from the University's Inquiry and Impact capital campaign could be used to support Student Counseling Services and other programs currently funded through SLF.

"The University of Chicago is unique in the vibrancy of our extracurricular opportunities and the role of Student Government in shaping campus life, but it is not clear that the amount of resources with which we have been provided has kept pace with the funding obligations expected of SG," Slate's memo read.