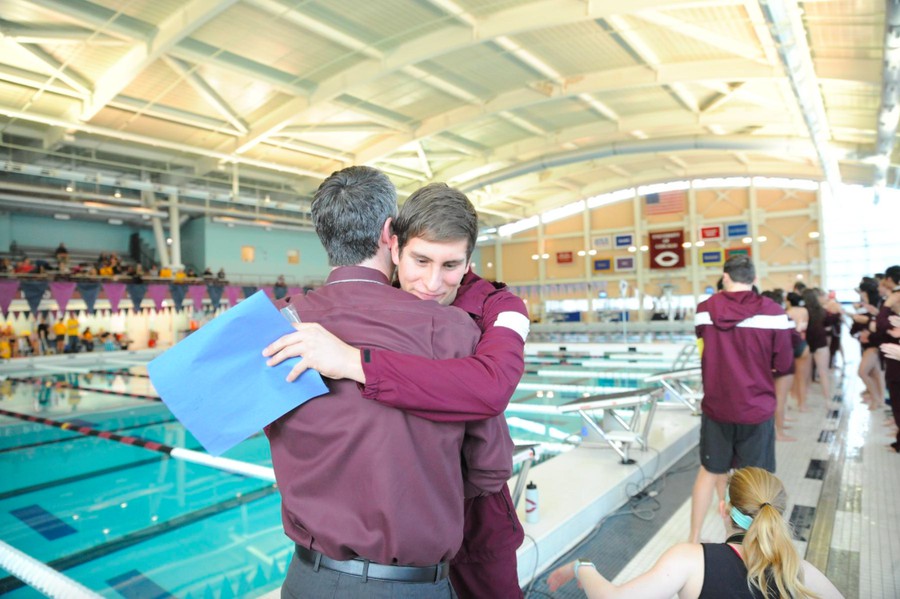 It is occasionally difficult to discern which sports team Brian Weisbecker is part of, mainly because there are very few home games that he doesn’t attend, no matter which sport is being played. Weisbecker has been a mainstay in the athletic community for all four years of his undergraduate experience, displaying his passion and love for the Chicago Maroons every step of the way. Not only has he gone out of his way to make a mark on the swim and dive team, but he has made a mark on every sport in this program.

Although one might think that Weisbecker spends all his time at Ratner, he was actually drawn to UChicago for other reasons. “I remember listening to a student explain for a half hour how, linguistically, music could be considered a language,” he said of his recruiting trip. “The other campuses I visited didn’t seem to have that same general passion to discuss anything people were learning about.”

Weisbecker is perhaps the perfect example of this interest in others and their thoughts, both in and out of the classroom. He never fails to ask other students how their days are; he constantly provides a smile and a warm “hello.” He is also an economics major with a Spanish minor, a University Scholar, and an Honorable Mention Scholar All-American. To say that the fourth-year takes his learning seriously would be an understatement.

As unbelievably bright as Weisbecker’s career has been at Chicago, it certainly hasn’t come without hardship. “I had to get two surgeries my second year and then a third in my third year, effectively barring me from two years of competitions,” he explained. “It was a frustrating and stressful experience, but my friends, teammates, and athletic trainers really helped me stay positive.”

It is shocking to look at the all-time swim and dive records and think of what might have been for Weisbecker. Even with his two years of injury, the fourth-year is No. 9 in school history for the 200-meter butterfly and No. 8 on the 400-meter individual medley list.

Although the journey was rocky, Weisbecker stayed positive, as usual, and was able to return for his last year of competitive swimming. “With everyone’s support, I was able to make it back. My struggle with injury definitely made every moment of this year so meaningful and fun,” the fourth-year said. This year was especially meaningful for the whole team, as the squad managed to secure 14th place at the National Championship this year.

Out of the pool, Weisbecker’s passions don’t stop with academics. He is also a World Sport Chicago Athlete-Ambassador, part of the Maroon Key Society, and a member of UCIB. However, these other organizations pale in comparison with the work he has done with The Order of the C (OOC), the male student-athlete advisory board. “From my first year I was blown away by the quality of our student-athletes, in all their different activities,” he said. “I also saw that the atmosphere, and even knowledge, of athletics was not at the level that the achievements of my peers warranted.”

“For the past four years I’ve worked to help OOC have a bigger impact on campus and to change the perception that athletics is not also something that we can be proud of at our university,” he said. He has led the charge on events such as National Student Athlete Day, cook-outs for the outdoor sports, and Neon Night, making good on his promise to bring athletics to the forefront.

However, Weisbecker would tell you that the OOC helped him more than he helped the organization. He said, “My participation in the OOC enriched my athletic experience because I was able to enjoy my team and sport while also having an opportunity to help improve the infrastructure supporting our student-athletes.”

The Maroons will certainly miss the cheering section Weisbecker always brings, as well as his fearless leadership at the helm of the Order of the C, but he won’t be too far away next year, as he is working in Chicago at a consulting firm. Hopefully he will come back for some games every now and then, although it would also be understandable if he never wanted to set foot in Ratner again after all he has given to it.