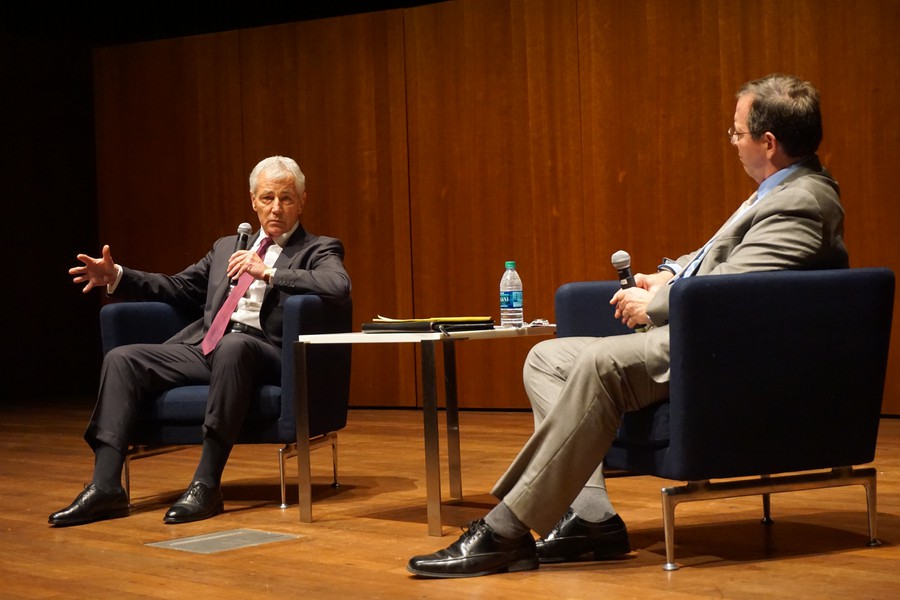 Chuck Hagel, former Secretary of Defense, visits the university at the Logan Performance Hall on May 12.

On Thursday, former Secretary of Defense Chuck Hagel visited campus to discuss the major challenges of American foreign policy and his faith in the American people.

Robert Pape, professor of political science and director of the Chicago Project on Security and Terrorism (CPOST), moderated the talk at the Logan Center for the Arts.

The event, sponsored by CPOST, began with Hagel’s assessment of the current political situation in the United States and his view of America’s security architecture. His remarks were followed by a conversation between Hagel and Pape and a Q&A session with student audience members.

Hagel began by speaking about the post–World War II system of alliances and international institutions, acknowledging its imperfections but emphasizing its overall success. “No World War III. That’s pretty significant. We take that for granted…. Every leader that helped build this world went to their graves very concerned about a World War III and a nuclear exchange. There’s been no nuclear exchanges,” Hagel said.

A former Senator from Nebraska, Hagel also spoke about the unprecedented nature of the past year in domestic politics. He highlighted his concern about the disillusionment much of the American public feels about large institutions, citing Gallup polls and votes cast for Bernie Sanders and Donald Trump.

“When a society starts to feel that way about its most important societal institutions, that represent the functioning of a society, that’s a very dangerous thing if it’s not corrected. And that’s where we are,” Hagel said.

Despite the turbulent primary season, Hagel emphasized his faith in the American constitution and the unique political processes that guide the country. “Process is important. I know that is often disregarded by a lot of people, but you need a process. You never get to any…objective without process. It can’t happen any other way, especially a sophisticated, free nation of 320 million people.”

Pape then asked Hagel about his view on the conflicts roiling the Middle East and what strategy the U.S. should adopt to help, citing the Balkans as an example of U.S.-assisted peace between rival ethnic groups.

Hagel stated that the foremost priority of the U.S. must be to formulate a political strategy, using trade, diplomacy, and intelligence-sharing to achieve its goals, instead of solely focusing on military tactics. “The military strategy…has to come within the framework of a larger political strategy because the political strategy is required to set an objective. An objective of destroying ISIS is an objective, but for what reason? Just to rid the earth of bad guys? We’re not going to end it with ISIS, I assure you.”

Pape and Hagel then discussed the continuing importance of America’s global alliances and the danger of abandoning or fundamentally altering them, as suggested by Trump.

Hagel commented that, while it may be tempting to shrink American commitments overseas when the middle class is struggling domestically, alliances are worth the investment. “Are these alliances still in our self-interest? And I would strongly argue that they are. They are because…one, those alliances multiply our influence in the world. They don’t weaken our influence…second, they help us do things that without alliances we couldn’t do, we couldn’t afford to do.”

In addition to discussing the foreign policy issues of today, Hagel also offered words of advice for the future foreign policy experts in the audience. “You’re moving into a world of immense complications. All the more reason that we have to be wise, steady, and manage through these crises…. We cannot continue to ricochet from crisis to crisis. There are too many uncontrollables in the world, especially for America, so much of this we can’t control, as powerful as we are we can’t control,” Hagel said.

After a Q&A session covering nuclear modernization, the U.K.’s potential exit from the E.U., and Hagel’s Senate confirmation, Pape concluded by praising Hagel’s commitment to honest intellectual dialogue in the political sphere.

“He’s somebody, as Secretary of Defense who’s confronted Obama with serious problems of the country, and...over and over again, [Secretary Hagel is] providing us something that really we just have so little of, which is true independent intellectual leadership,” Pape said.