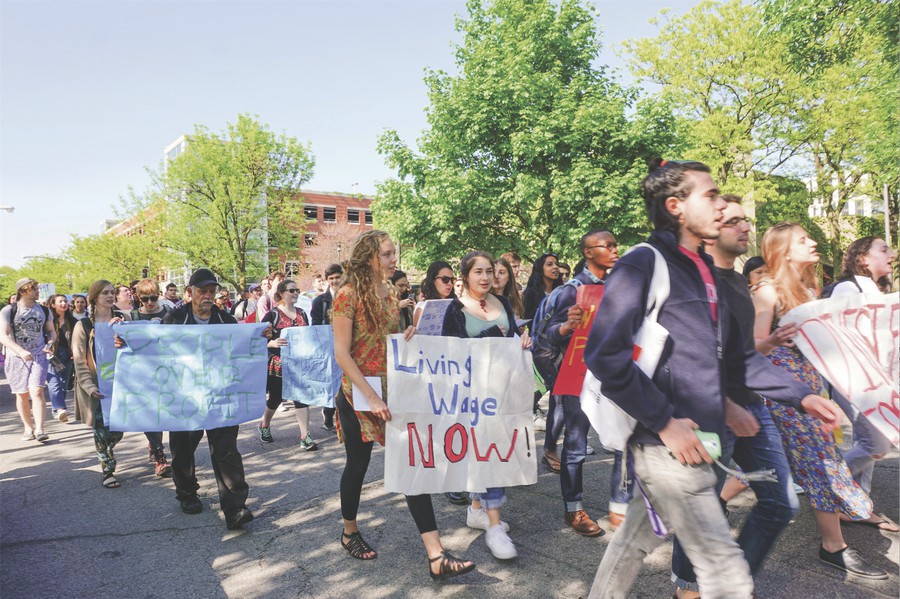 Students, staff members, and alumni joined in protest on Thursday to express concern about a range of issues from equitable policing to the University’s divestment from fossil fuels. The protest called for increased accountability and democratization of the University. Protest organizers said more than 150 people showed up in support.

The protesters gathered outside Ratner Athletic Center and marched across the main quad to Edward H. Levi Hall. Before the protest, a group of 34 students and alumni had gathered to occupy Levi Hall until a meeting with the administration was arranged. They joined the crowd when the UCPD escorted them out of the building.

Fair Budget UChicago (FBU), the Campaign for Equitable Policing (CEP), Students for Disability Justice (SDJ), and UChicago Climate Action Network (UCAN) organized the march and action. These four campaigns are a part of the IIRON student organization. IIRON Student Network (ISN) has a base at University of Chicago and coordinated the protest.

The rally was organized in response to the administration’s lack of attendance at a public meeting of various RSOs. IIRON invited administrators including Provost Eric D. Isaacs, incoming Provost Daniel Diermeier, and Dean of Students in the College John “Jay” Ellison to a meeting during fifth week at which students planned to present their concerns and propose changes. The administrators did not attend the meeting.

Second year Hannah Breslau, an organizer with ISN and a member of its media team, said that local and national news agencies were contacted to report on the rally. According to Breslau, the University turned the press away with threats of trespassing charges (Breslau did not herself see any reporters turned away). Student Body President and fourth-year Tyler Kissinger and Class of 2018 College Council representative Cosmo Albrecht wrote on Twitter that TV news reporters were denied access because the campus quadrangle is private property.

“Juhi Gupta, who was the Media lead for this action, was told by [NBC] Channel 5 that they could not enter the quad. The cameraman was on the other side of Levy Hall (on Ellis). He could not see anything where he was stationed. [Gupta] asked me to help escort the cameraman to a place they could get better footage. When [Gupta] and I got to where they were, I was immediately told by a communications office representative that if the cameraman tried to enter the quad he would be asked to leave,” said organizer Sofia Butnaru.

She added that she tried to find an alternative location for the cameraman to film, but the communications representative rejected the options suggested. Gupta filmed the action, and she sent the recording to the cameraman,

“The people who entered Levi Hall for today’s demonstration left without incident when the building closed at 5 p.m. TV crews are free to film from public sidewalks, but to be on campus they need prior permission from the University,” University spokesperson Jeremy Manier said.

According to the UChicago News website, the University’s policy regarding visiting journalism is that “Journalists who wish to visit the University of Chicago campus, which is private property, should notify the News Office...before arriving. Special arrangements may need to be made for camera-carrying journalists.”

First-year Juhi Gupta, the FBU and rally’s media liaison, said the four campaigns collaborated in hopes of attaining shared governance and democratization of the University. She said that the campaigns have tried to contact the administration and establish a forum in which they could communicate their concerns to the University, but that the administration has been unresponsive.

At around 4 p.m., before the protest, 34 students and alumni entered Levi Hall when the locked doors were opened as someone was exiting the building. The group sought to meet with the administration and present its demands for accountability. The individuals gathered in the waiting room on the fifth floor outside of Provost Eric D. Isaacs’s office. After waiting for more than an hour they were escorted out by UCPD. They then joined the crowd outside Levi Hall chanting, “We’ll be back.”

The group had originally planned to sit in the administrative lobby until a meeting with the University was arranged. Students and alumni were equipped with adult diapers, blankets, and clothes, but were forced to exit after a little more than an hour. Officials told the students that if they remained, they could face disciplinary action or arrest by administrators and the UCPD.

"Besides arrest, those of you who are students also face the real possible consequence of discipline. They have various outcomes related to discipline, up to and including suspension or expulsion. So I want you all to be aware of the options that are available," said Associate Dean of Students in the University for Student Affairs Belinda Vazquez.

Kissinger was among the group.

“I was just kicked out of the admin building that my tuition dollars go to pay for. I was kicked out with 33 other people, students and not students, because we wanted to talk to some people….  The same people who live in this locked castle are people who make decisions about our endowment, that make decisions about if we invest money to support people with disabilities, if we invest money to support survivors, and they make bad decisions,” Kissinger said. 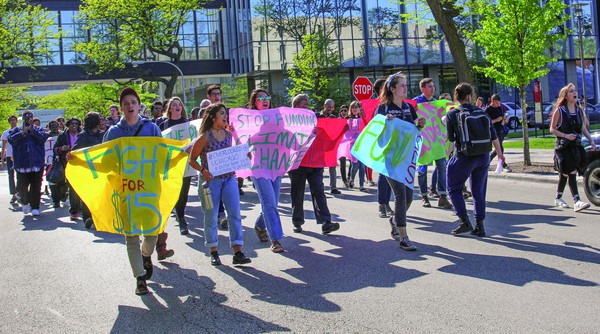 First-year Marielle Ingram, a representative from FBU, reiterated the campaign’s demand that the University raise the campus minimum wage to $15 per hour. FBU also calls for the administration to ensure a fair and equitable transition and affordable health insurance for dining hall workers as UChicago Dining brings in a new catering company, Bon Appétit.

“Working under the University, I just started working minimum wage recently, and it isn’t enough, especially living in Chicago.... Many of the students who actually need the money aren’t given work-studies and there’s nothing subsidized for them. There is a notable lack of accountability and transparency from the University admin,” Ingram said.

Several members from UCAN, a campaign pushing for the University to divest from fossil fuels, also spoke of the difficulty and inefficiency they encountered while presenting their concerns to the administration.

Graduate student Mathilde Gerbelli-Gauthier, a representative from CEP, criticized the UCPD’s lack of transparency and accountability. She argued that as one of the largest private police forces in the country, the UCPD is supposed to serve the entire community, but only answers to the administration as complaints are reviewed internally by a committee of faculty, staff, students and community members.

On behalf of SDJ, fourth-year Nora Helfand said that the campaign demands that the University provide more funding to expand and revitalize Student Disability Services and ensure that all the buildings on campus are physically accessible. She discussed the University’s history of noncompliance with disability laws, and the Department of Education’s lawsuit against the administration. She added that the University has rejected a proposal to add another special access button to a campus building.

Members of PSA, Local Teamsters 743, and Student Government then took the floor to criticize the administration’s lack of accountability and to express support for the IIRON campaigns.

Protesters chorused a series of chants as they marched from Ratner and gathered outside Levi Hall:

“What do we need? Living wages. When do we need it? Now.”

Gupta said, “The goal of the protest should not even be ambitious. It is ridiculous that this has to be ambitious. Getting a meeting with the University to discuss implementing these demands should not be an ambitious goal. But it is, because they refuse to meet with us countless times in the past. Regardless of even getting them to agree to some of the demands we are putting forth, they won’t provide us with a public forum in which to discuss our concerns.” 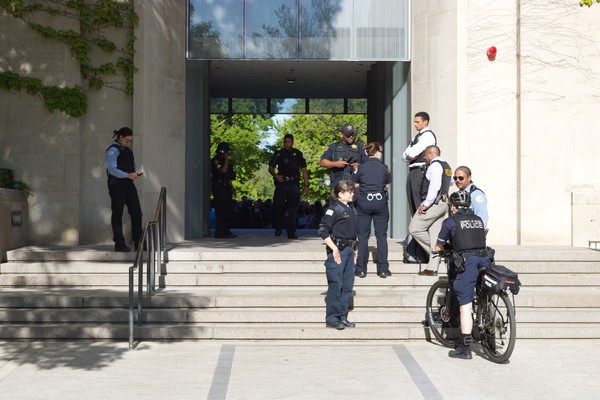 In response to the rally and the 34 students’ forced departure from Levi Hall, Manier stated, “Dissent and protest are integral to the life of the University of Chicago. The University welcomes a wide range of voices, and has policies ensuring that all members of our community have broad freedom to share their opinions and engage in rigorous debate. These policies provide guidance for protests and demonstrations, protecting students’ right to expression while maintaining the normal functioning of the University.”

According to Manier, the administration and faculty members regularly meet with students through various platforms to discuss issues, such as Student Government meetings.

CLARIFICATION – MAY 20, 2016: This article was changed to make clear that Gerbelli-Gauthier said UCPD complaints are reviewed by a committee internal to the University, not internal to the department.