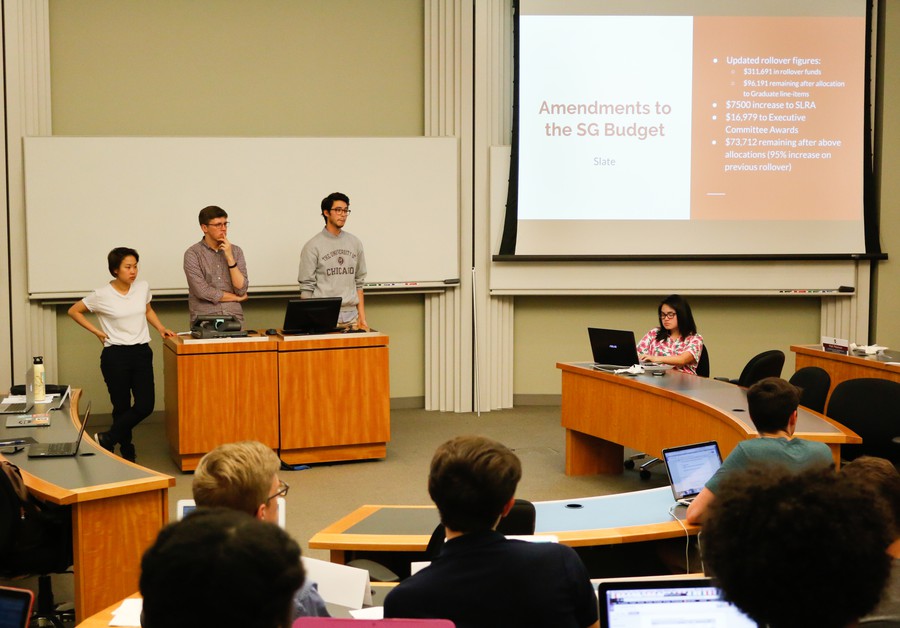 GA gathered last night in the basement of Booth for its last meeting of the school year to discuss a proposal by Executive Slate to apply rollover funding toward the compensation of Executive Committee (EC) members. GA voted to instead allocate the funding to Student Leadership Recognition and Access Program (SLRA), a program that compensates students who balance volunteer work and part-time jobs. The motion passed 18–9–6.

In a memo addressed to GA on May 21, Slate proposed to allocate annual awards to EC members for their elected roles in order to mitigate the financial burdens the roles carry. The annual sum of $16,979 in awards would have been derived from administrative funds and rollover funds from previous years.

Updated rollover figures, which total $311,691, with $96,191 remaining after allocations for next year’s recently passed budget, were introduced at the meeting. The rollover amount increased by $58,348 from the estimate at the previous GA meeting, which Vice President for Student Affairs Kenzo Esquivel explained is due to conservative projections. Slate proposed using the newly projected rollover funding to increase SLRA funds by $7,500 and create EC awards totaling $16,979.

Discussion of the SG Awards proposal began with personal anecdotes from Executive Slate members. Kissinger, struggling to hold back tears, said that being a University student is a full-time job.

Kissinger explained that he is a self-supporting student and that his financial aid and outside scholarship do not cover all of his expenses. He added that his minimum-wage part-time job at a campus coffee shop is his primary source of income. Vice President for Administration Alex Jung, also teary-eyed, explained that she attends UChicago because her financial aid and campus work as a self-supporting student make it less expensive than it would be for her to attend college in Korea.

Citing a statistic from the American Student Government Association (ASGA), the May 21 memo stated that 77 percent of elected student government leaders across the US are financially compensated. Kissinger added in an online personal statement that SG leaders at other universities are compensated with free tuition or salaries surpassing $10,000.

A related proposal put forward in 2014, sought to provide SG cabinet members with stipends to compensate for their large time commitments, failed. Citing the growing role of SG, Slate wrote in its memo that time spent on SG poses a financial burden, especially for low-income students who must support themselves through part-time employment.

“For much of my time at UChicago I was unable to engage in the classroom to the degree I wish I could have, and that came as a result of trying to work a campus job while prioritizing my work in SG above all else. While I’m immensely proud of the work that we’ve done in SG over my past two years as President, I know I could have done more if it weren’t for this financial stress,” Kissinger wrote on the SG website.

“Collectively, the three of us in Executive Slate work a total of six part-time jobs. The amount of time it takes to do the work in these positions will only continue to grow as SG’s impact on campus grows. That is why we are proposing for EC members to receive a small annual award— essentially the equivalent of a part-time campus job,” Kissinger added.

Several SG members voiced support for paying SG members, but expressed consternation over the message it sends to the student body.

Graduate Liaison to the Board of Trustees Katie Perri, a USC alumna who witnessed a similar program during her undergraduate career, explained that the USC SG awards system was both robust and effective. However, Perri argued that all members of EC should be equally compensated for their work, stating that Slate members do not necessarily work harder than their EC counterparts. Esquivel responded that most institutions implement a hierarchal awards structure.

First-year CC representative Qudsiyyah Shariyf expressed concern over the message that awarding SG leaders sends to RSO leaders who apply for funding through the SLRA. Shariyf noted that this may not be the intended message of the proposal, but said that it may be interpreted as a form of privilege that SG members would be guaranteed annual stipends. Adding that there should be a level playing field for all student leaders, Shariyf argued that SLRA should be adapted so that SG leaders can have access to funding, which SLRA currently prohibits.

Second-year CC representative Calvin Cottrell expressed discomfort with the timing of the proposal. He noted that this was the last GA meeting of the year and SG members should take more than one meeting to discuss the proposal to pay themselves.

Current CC Chair and incoming SG President Eric Holmberg voiced support for the proposal, but stated that both he and future Vice President for Administration Salma Elkhaoudi would abstain from voting on the issue. Incoming Vice President for Student Affairs Cody Jones, who does not currently hold an SG position, argued that there should be no shame in privileging SG members with compensation. Jones added that Holmberg, Elkhaoudi, and incoming Community and Government Liaison Cosmo Albrecht should not be discouraged from voting.

Third-year representative Katherine Shen agreed that SG members should be compensated, but proposed that funding for the program not be derived from Student Life Fees. In response to Shen’s suggestion that EC members be compensated by means of tuition cuts or housing subsidies, Esquivel said that the administration has not been receptive to these proposals.

Second-year Asya Akca asked why the compensation of CC members was not part of the discussion. In response, Albrecht said the program could be expanded later.

Despite arguing against the particularities of the proposal, most SG members who spoke during the debate expressed gratitude to Slate members for their work over the course of the year.

“We didn’t come in to be thanked. It was more just to try to make the opportunity available to a wide range of students and I don’t think that got accomplished today,” Jung told The Maroon after the vote.

A motion to approve an increase to SLRA funding with the same splits between College and Graduate Councils passed unanimously, with one abstaining vote. Shen then proposed that the SG awards system be a pilot program in which the end goal is to find an alternative source of funding rather than the Student Life Fee. Shen’s amendment stated that the future Slate would have to vote to renew the program next year. The amended version of the proposal, which included Perri’s proposal to compensate the two GC chairs, failed 12–16–5.

Cottrell proposed a motion to allocate the proposed EC awards funding to SLRA, in addition to the previously allocated $7,500. This motion passed 18–9–6. The new total of $24,479 was a significant increase from the $10,000 allocation.

“I think that we’re obviously disappointed with the outcome…. I am excited that SLRA is seeing increases at the levels that it is going to and I think that it’s exciting that we have folks in the GA who are committed to figuring out how SLRA can also go to support members of Executive Slate and Committee” Esquivel told The Maroon following the vote. He emphasized that this sentiment extends to all of SG.

“I’m definitely disappointed. The work of Student Government leadership should be accessible to all students; as you heard tonight, it simply isn’t at this point. As the one who originally proposed the SLRA program and got it off the ground, I am proud that it is recognized as a program worth supporting. But as long as the workload of SG EC members remains so substantial, and as long as the impacts of that work have an impact for all students and student organizations at UChicago, I think the roles deserve compensation so that students of all backgrounds have the realistic ability to succeed and dedicate the amount of time these roles deserve,” Kissinger said.

SG to Consider Resolution on Paying President $4,500 Per Year

Student Government will consider a resolution on Monday to pay the SG president $4,500 per year and the vice presidents $2,250 per year.