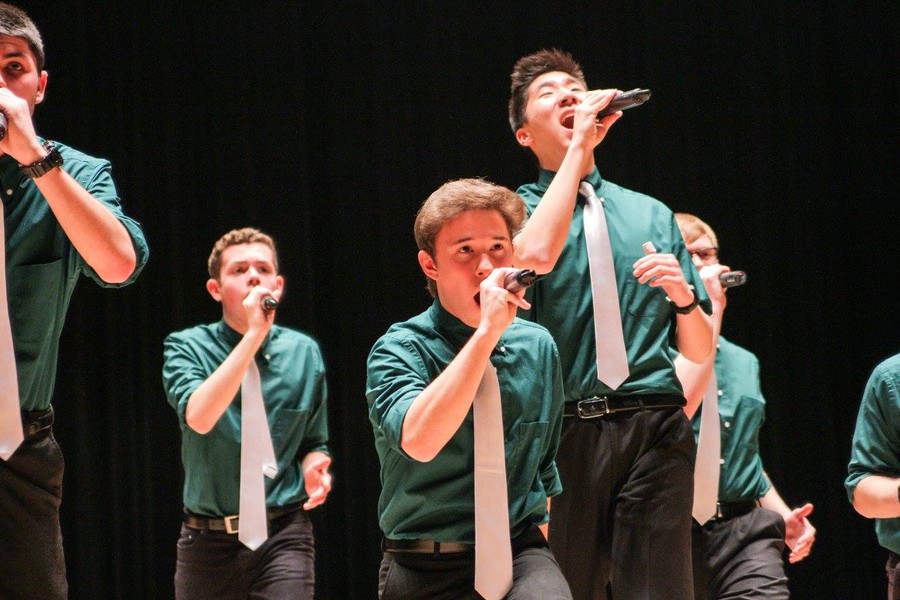 Courtesy of run for cover

Prepare for an onslaught of beatboxing, mic drops, and album releases. Next week, seven of UChicago’s a cappella groups will perform across campus to round out a year of growth and International Championship of Collegiate A Cappella (ICCA) successes. As the quarter comes to a close, The Maroon asked each group to reflect on this year’s highlights and preview what’s in store for next year.

“The most exciting thing for the group this year was our second ICCA. We also recently performed at Northern Illinois University with the Harmelodics, an all-female group who we met during ICCAs. Our upcoming show is going to include our ICCA set from winter quarter, four new songs (including a co-ed collaboration with UChicago’s Unaccompanied Women), as well as something a little bit outside our comfort zone—a cover of “Trap Queen” by Fetty Wap. In terms of the future, we are planning on releasing an EP soon. The goal is to release it during O-Week, so recording is going to begin shortly.” 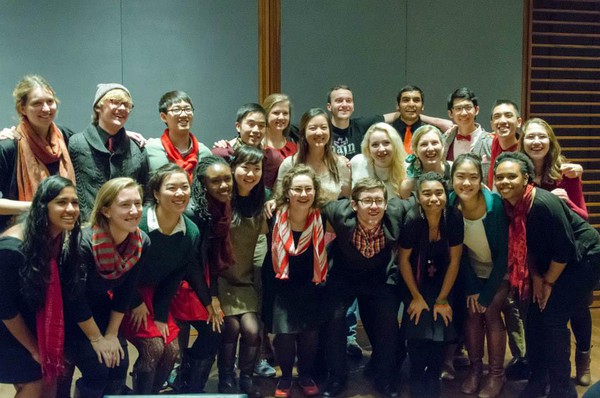 Make a Joyful Noise: This is Our Praise!

“The most exciting thing for our group this year has been the growth in number and enthusiasm. In previous years, we have been a relatively small group, and this year we’ve had excited new members join. For this show, we have a guest a cappella group from UIC joining us! For the future, we would like to see continued growth in numbers, and we would like to begin arranging more music ourselves. We would also hope to get closer as a group.” 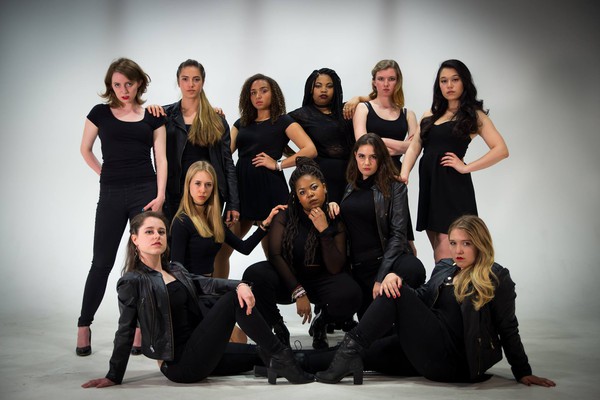 “The most exciting thing for us this year was being a slightly bigger group (12 compared to last year’s nine), which allows us to do more complex arrangements. We also have more people who can beatbox and arrange music, so everyone is just very versatile. It makes us more well rounded as a group. The show coming up next Wednesday is an album release concert for our new record Medusa Complex, which we have been working on for a little more than two years. We are very excited to share it with the world! We are losing two women this year at graduation, and though we will miss them far too much to even begin to express, it is also true that next year we should be able to grow even more.” 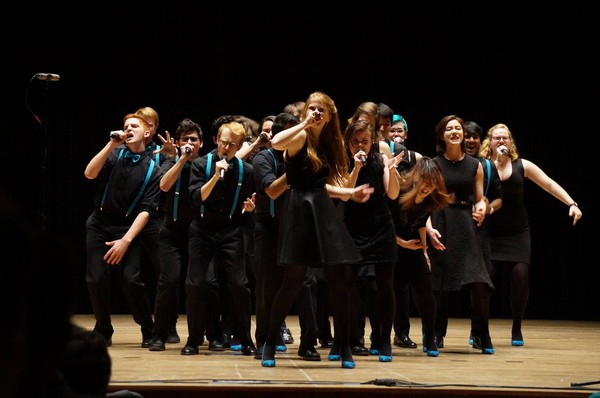 “The theme of our concert this year is “Bedtime Stories,” which we’re all really excited about. We’re trying to incorporate different aspects of the theme into our concert such as telling bedtime stories about members of our group and serving late-night snacks like cookies at the event. One of the biggest highlights of our year was taking third place at this year’s quarterfinals for ICCAs! We also recently released our fourth studio album, Black and Blue.  Next year, we’re very excited to compete again in the ICCAs, and we’re hoping to put out another album! We are also looking forward to finding new members to join us next fall.” 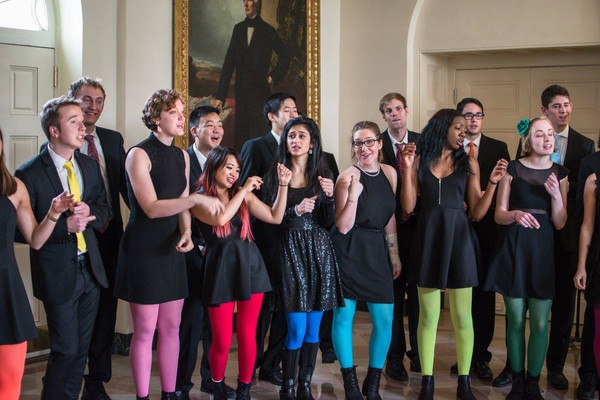 Voices in Your Head

Voices in Your Head: Lights

“We’re celebrating the release of our sixth studio album and premiering a ton of new music—including three original songs written by current members and alumni. In addition, we’ll be performing songs from the set that won us second place at the ICCA last year. The incredible singers of The Remedy, an all-male R&B vocal group from Washington Park, will also be joining us to open the show. They’ve got an amazing sound, and we’re excited to be bringing a cappella from around the city to the UChicago community.

This winter we were honored to have performed for the President, First Lady, and guests of the White House. That experience alone was surreal. Then over spring break, we caravanned up the Pacific for our spring tour (with stops in Tijuana, San Diego, and San Francisco along the way). The traveling, the performances, and the general craziness that ensues when 20 college students are in one place definitely brought us closer together. After this concert, about half of our group will be graduating. While we’re sad to see them go, we’re also excited for what’s next.”

—Jaclyn Sattler and Will Cabannis 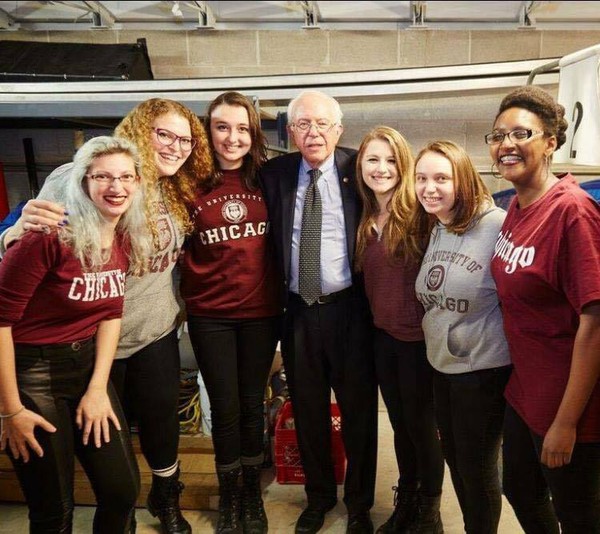 “We’re debuting five new songs, experimenting with being a co-ed group for a second, and following it up with an alumni-sponsored dessert reception. A huge highlight: singing with Vampire Weekend at a Bernie rally featuring Bernie Sanders, and we generally got closer as a group—lots of group Netflix and chill (jk) (maybe). Next year, we look forward to trying new things, welcoming new members, and showing them how wonderful their life can be as a part of the growing UW family! Also, album?” 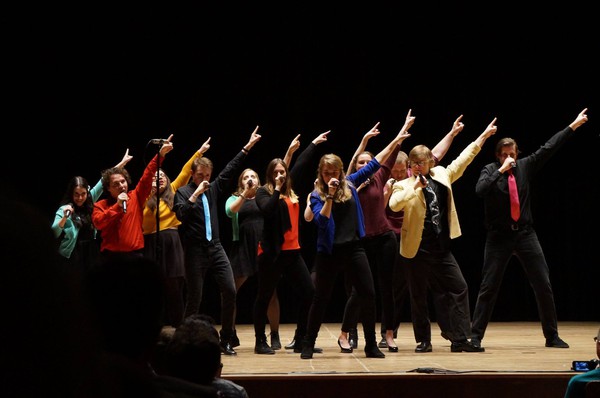 “The set list for our concert is one of our most ridiculous, hilarious, and fun line-ups yet. We’ll be featuring a wide variety of soloists and saying goodbye to our six graduating fourth-years. Also, since our concert is presidential-themed, we will be handing out our very own RnJ campaign buttons at the door.

This year has been an incredibly exciting year for us. We competed at ICCA Quarterfinals for the first time, went on tour in Phoenix, AZ, and recorded four new songs for our upcoming album release. We’re looking forward to releasing our album, Jews On First, hopefully competing at ICCAs again, finding new members during auditions, and continuing to grow musically and bond as a group over the next year.”