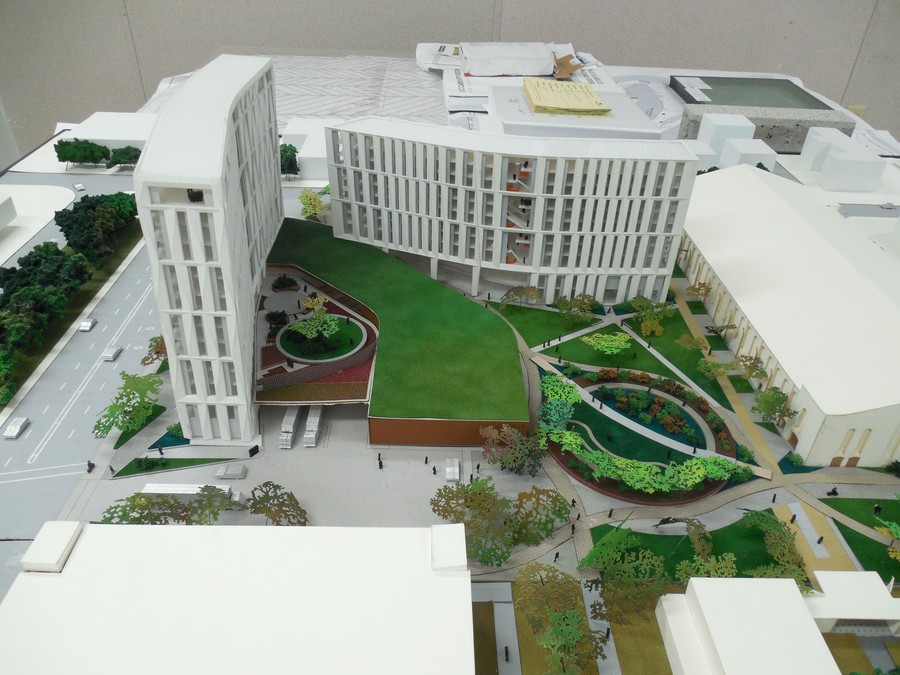 The 2016–17 school year will bring new housing and dining providers to campus. Starting in September, 800 matriculating first-year students and current students from satellite dorms will move into the newly constructed Campus North Residential Commons, located north of Henry Crown Field House at the corner of 55th Street and University Avenue.

Four members of the UChicago faculty will assume the roles of Resident Masters of Campus North: Steven Rings, an associate professor of music theory and chair of the Society of Fellows; Gretchen Rings, a reference and interlibrary loan librarian at the Field Museum; James Evans, an associate professor of sociology, director of the Knowledge Lab, and a senior fellow at the Computation Institute; and Jeannie Evans, a trial lawyer and founding partner of Agrawal Evans LLP.

“[Campus North’s] unique architecture, the communal spaces and views, proximity to the art museum, theater, and gyms, and direct access to the wonderful Washington Park, in addition to its natural connection to the University make this an environment that reaches out beyond campus, while still remaining within it,” Evans said in an interview with The Maroon last month.

While the names of eight of the nine house dorms being affected by the construction of Campus North will be retired, Breckinridge will retain its name and relocate to International House (I-House) this upcoming fall. Craig Futterman, a clinical professor at the Law School and campaigner against police abuses, and Kenyatta Futterman, the youth program coordinator for the Department of Safety and Security’s Office of Risk Management and a former academic adviser in the College, will serve as I-House Resident Masters.

Along with the opening of Campus North will come the introduction of Bon Appétit, a food service provider replacing Aramark for the upcoming school year. In an e-mail, Vice President for Campus and Student Life Karen Warren Coleman said that Bon Appétit was chosen after the company’s officials demonstrated a commitment to creating a variety of healthy, high quality meals.

“Aramark very much values the contributions of our employees, and we are particularly proud of the service they have provided at UChicago throughout our successful partnership,” Aramark Vice President for Corporate Communications Karen Cutler said. “For almost three decades, Aramark has developed, implemented, and continuously enhanced UChicago Dining’s residential, retail, and catering programs, resulting in increased customer satisfaction, revenue growth, and operational improvements.”

Toward the start of May, student activists and members of the Fight for Just Food held a 24-hour long hunger strike and rally in protest of what they believed was the University’s complicity in mass incarceration as revealed through its choice in food service providers. In a statement released to The Maroon, Bon Appétit said that it has never provided food services to prisons. The company only works with museums and cultural centers, private colleges, and corporations, though it is owned by a larger company that does work in prisons.

“Bon Appétit is a subsidiary of Compass Group, which profits from serving food in prisons, so for us, this decision demonstrates the University’s continued complicity in mass incarceration,” third-year and member of the University’s Fight for Just Food Coalition Natalie Naculich said. “We’re continuing to push for UChicago Dining to transition to self-operation within three years, and to give 40 percent of the dining contract to local South Side businesses.”

Bon Appétit says that it is committed to providing healthy, flavorful food prepared from fresh ingredients and produced in a sustainable, socially responsible way. Students can continue to expect vegetarian, vegan, kosher, and halal choices, among others. Bon Appétit will begin working for the University on July 1.