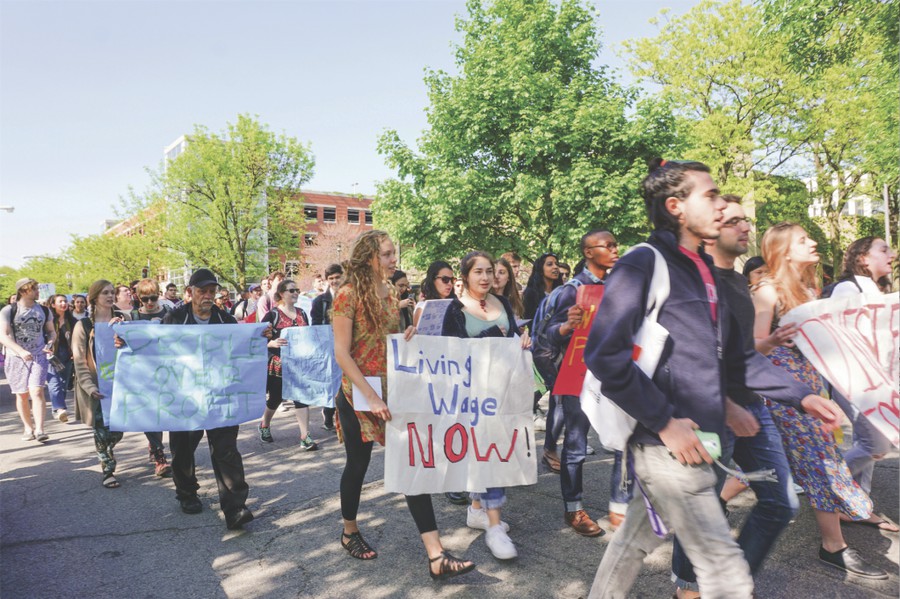 Students walk down the street during the protest to democratize the University holding various posters.

IIRON—once the Illinois-Indiana Regional Organizing Network—has linked University students with opportunities to advocate on behalf of local and national issues for years. This year, the IIRON Student Network (ISN) has brought its activism to campus with a series of attention-grabbing protests. Many of the University’s most important advocacy groups joined under ISN’s banner for a series of actions which escalated as the end of the year neared.

On November 2, four University of Chicago students and two alumni were arrested along with 38 other protesters at the Chicago Board of Trade. The protest, organized by the Fair Economy Illinois (FEI) coalition, demanded a “LaSalle Street Tax” on corporations and higher income taxes on the rich to balance the state’s budget. Southside Solidarity Network (SSN), a UChicago student organization, and UChicago Climate Action Network (UCAN) both sent protesters. Hundreds of protesters marched from Thompson Center to the Chicago Board of Trade, where they blocked entrances and staged a die-in.

On February 26, 60 students from Fair Budget UChicago protested to demand that the University raise the minimum wage on campus to $15 an hour. The protest included a march from Regenstein Library across the main quad to Edward H. Levi Hall.

More than a month later, on April 2, students and activists gathered outside the Chicago Symphony Orchestra (CSO) to protest higher-education budget cuts before the Saturday 8 p.m. orchestra performance. Students from FBU participated in the protest directed at two University trustees along with the IIRON Student Network.

A public meeting, organized by IIRON and attended by over 50 student activists from IIRON and Phoenix Survivors Alliance (PSA), was held in Reynolds Club on May 2. The meeting aimed to provide a forum at which students could express their concerns over administrative policies and advocate for increased transparency and communication with undergraduates. The meeting was initially organized as a town hall meeting that Isaacs, incoming Provost Daniel Diermeier, Vice President and Secretary of the University Darren Reisberg, and Dean of Students in the College John “Jay” Ellison were invited to

attend. However, no administrators attended.

A week later, on May 9, three University of Chicago students, among many protesters unaffiliated with the University, were arrested for blocking the entrance to Citadel Headquarters, a hedge fund based in downtown Chicago. The students were participating in a rally led by FEI and IIRON against the Illinois budget crisis and Governor Bruce Rauner. The protest, urging advocacy for higher education funding, was directed at Sam Zell, James S. Crown, and Kenneth C. Griffin, significant donors to Rauner’s super PAC and to the CSO.

In response to the administration’s lack of attendance at the May 2 public meeting, IIRON organized a protest on May 19. According to protest organizers, more than 150 students, staff members, and alumni participated in the rally calling for increased accountability and democratization of the University. Issues ranging from equitable policing to the University’s divestment from fossil fuels were discussed.

The protest consisted of a three-block march on the street from outside Ratner Athletics Center, through Hull Gate across the main quad, to Levi Hall. Before the protest, a group of 34 students and alumni had gathered to occupy the administrative lobby outside Isaacs’s office once again until a meeting with the Provost was arranged. The sit-in lasted over an hour, and at 5 p.m. the participants joined the rally outside after the UCPD told them they could face disciplinary action up to suspension and expulsion or arrest if they remained, and escorted them out of the building.

At Monday’s Student Government General Assembly meeting, IIRON was finally able to speak to a top-level administrator. When Isaacs appeared before the General Assembly, activists associated with IIRON were ready with questions. They demanded yes or no answers, which Isaacs refused to supply. After a tense half-hour, Isaacs left. As for IIRON, the participants in the sit-in chanted “we’ll be back” after they were expelled from Levi Hall on May 19, and this seems more than likely.